When it Comes to Writing, Is There Such a Thing as Trying Too Hard? 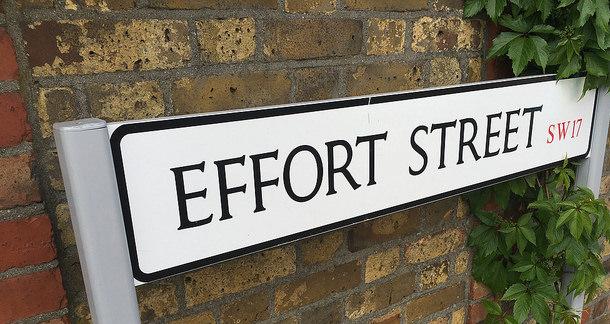 We’ve all heard the criticism before. Someone was ‘trying too hard.’ But what does that mean? Isn’t it good to try hard? When does it cross over from the appropriate amount of effort to too much?

It can be said about anything: fashion, socializing, networking, even writing. I think we’ve all experienced the receiving end of it at some point. Someone trying too hard to get our attention or make us laugh or impress us, etc. It’s off-putting, but why is that different than the natural attraction we feel when someone is passionate and enthusiastic? Why is it different than admiring the hard workers who hustle to stay at the top of their game?

My main topic for today: how does “trying too hard” apply to writers? Can we try too hard? And what happens if, in avoiding that, we don’t try hard enough?

I think an important point here is in the linguistics. Talking about effort, and how hard you try to make something succeed, has a totally different connotation than that which comes with the pre-canned phrase “trying too hard.” (I learned that pointing out linguistics is particularly important in the sharing and comments of this post, where most people spoke to their interpretation of the phrase rather than the point I was trying to make.)

Your writing friend is in a rough patch. They’ve been trying to land an agent for over ten years now, writing many novels and putting in hours and hours of work to get them revised and in good shape. They’ve attended conferences to learn the business side of things, know how to write a killer query letter, and have a big-ass chart they use to research and organize all of the agents they submit to. Still, no one has signed them. In a moment of frustration after yet another form rejection, they bemoan, “Maybe I’m trying too hard.”

They are not. You know this. They are trying very hard, and they must, and they must continue to do so to achieve what they want. The concept of “trying too hard” has no validity here. (Sorry, friend.)

Because you are a literary citizen who is interested in both giving back to the community and in bettering your skills in the craft of writing, you attend a regular critique group. One of your colleagues brings in a work of literary fiction that is so self-inflated that the message is lost in the fountain of strained prose and obscure symbolism. In an effort to prove themselves part of the collegiate crowd—those who decide the canon—they’ve deployed every trope, technique, and trend available to the high-brow. Each word has been wrung within an inch of its life. After the group kindly explains to them that their story is suffering from a little too much contrivance, the writer bemoans, “Maybe I’m trying too hard.”

Yes. Exactly. They are. You know this too. They may or may not have actually tried particularly hard to get their prose just right, but regardless, the result is an effect of overwrought effort. The prose isn’t confident or easy; it fights for its own space. It’s like the desperate kid at the party who gets wasted to seem cool, but ends up looking extra sad with vomit on their shoes. The concept of “trying too hard” has great validity here.

Obviously, none of us wants to be that writer in the second example, but most of us have fallen into the trap at least a little bit. The best way to avoid becoming that writer is to understand why we often feel the need to use those methods. In my experience, it’s usually insecurity in our craft. Newer writers are particularly prone to this, because they haven’t built up confidence yet, but it can strike anyone. And although literary fiction seems particularly prone to the need to “prove itself,” it can strike any genre. I’ve read comedies where there are too many forced jokes, romances where one more blush will make me puke, horror stories with more monsters than you can put into a dance video, and essays with citations for common knowledge. These are all forms of compensation.

Common Compensation Techniques to Look for:

If you find one or more of these things in your writing, don’t panic. We’ve all been there, and everything comes with context (and in degrees). There’s nothing wrong with poetic prose. It’s when the poetry obscures your meaning that it can become a problem. But if your gut (or critique partner) is telling you you’re guilty of weakening your writing by “trying too hard,” what should you do?

Relax. So much easier said than done. But that’s kind of what it is. You need to learn to relax into the drafting process. Fast drafting can be a miraculous cure for many of these things (unless they’ve already become habits, in which case you'll need to learn to weed them out in revisions). So can focusing on your strengths instead of your weaknesses. Many of us employ the methods above because we’re afraid of some deficit in our writing, and we go too far the other way. Instead, before you sit down to work, think about all of your strengths, and try to utilize them. A change in focus can work wonders.

And no, the irony isn't lost on me that learning to make your writing seem less effortful in effect sometimes requires much more effort in practice. Told you linguistics was a bitch.

As much as none of us wants to be the writer in example 2, we should all, hopefully, want to be the writer in example 1. Why? Because hard work really does pay off. Sure, even more than that we might want to be the writer who lucks into talent and timing and success with very little effort. That sounds dandy, but it almost never happens. So barring that fantasy, we should want to work hard, because that’s how we achieve success. And by success I don’t just mean bestsellers; I mean whatever metric you use to measure your goals. Good writing. A solid readership. An agent on your team. Bestsellerdom. Whatever—they’re all hard to achieve.

Most writers, to be honest, don’t try hard enough.

What I see, far more often than example 2 and the insecure writer deploying every method in the handbook, is the opposite of example 1. Example 1 is the rarity. Most writers, to be honest, don’t try hard enough. Most writers don’t stick with it for ten years despite setbacks; they give up after one. They don’t write many, many novels trying to land a book deal. They write two, maybe three, before letting the dream dissolve. They don’t persist; they cave. And I’m not saying there aren’t good reasons to let a dream go—there are—but if you aren’t willing to let it go, you have to be willing to keep trying. Hard. There’s no such thing as “too hard” when it comes to actual effort. (Unless, of course, you’re putting yourself into an unhealthy position. Steady effort over a long time is better than extreme effort that burns you out early. All in balance.)

So yeah, sure, a lot of us start out as example 2 in a desperate attempt to earn our chops and prove our value as Great Talents, but most writers grow out of that eventually and look back on the early work with a bit of cringing. Still, I don’t think that’s nearly as bad as using that old expression as an excuse not to put in full effort. I’d rather be an example 1 any day, every day.

How about you? Are you guilty of trying too hard? In what way? And do you think it benefits you?

Great piece Annie. I’ve definitely been an Example 2 writer in my day, especially in moments where I’ve discovered a new writer and unconsciously begin imitating them, whether in prose or in content. It’s difficult to maintain the balance of influence and imitation, but I think the best way is to look at what you’ve written and ask, “Where am I in this?” If you can only see the influences but not yourself, you’ve got an imitation on your hands.

Sorry for my ignorance, but why is a flash forward to the end a bad thing? I am still learning the ropes.

It was always difficult for me to write texts, compositions and all kinds of materials.

But these days there are many services that provide assistance in writing essays, term papers, articles. Thanks to capstone writers, I was able to get through writing my assignment. The work was done on time and in very good quality. I was finally able to unload my busy schedule.

#Thanks for the post. Very interesting post. Writing has been really a challenge to most graduates nowadays. Thanks to the very many writing services where you can <a href ="https://99assignmenthelp.com/dnp-capstone-project-writing-services/">Hire professional DNP Capstone writer </a> and you will be guaranteed the <a href ="https://99assignmenthelp.com/bsn-nursing-papers-services/">Best Bsn Nursing paper services </a>