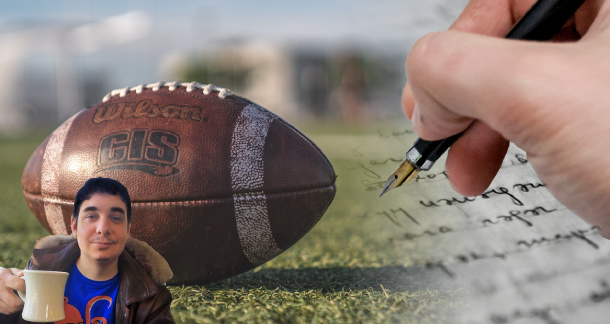 This is it. This is my last attempt to bring Sports Twitter and Writer Twitter together. I can’t believe LitReactor is letting me do this article. This is like my dream article. I love sports and I love writing, and man, I love the hell out of a good sports metaphor for writing. This is really happening. LitReactor has made my dreams come true.

My favorite sport is American Football. I love it, but I almost love the NFL Draft more than watching an actual game. (This could be because I am a big Miami Dolphins fan and they’ve been terrible for a long time.) The draft consists of seven rounds of NFL teams picking the players who will be added to their lineup for the next season. That might sound super boring and make you think of dodgeball nightmares during gym class, but to me it is fascinating seeing who picks who and why. There is a whole culture surrounding the draft, where sports nerds make mock drafts and try to predict what team will pick what player during each round. Mock drafts are basically astrology for bros like me. I read about that shit almost every day.

I enjoy everything about the draft. That’s my excuse. But why should non-football-watching writers care? Because you will learn a lot about creating a memorable moment. The plot twists and turns of the NFL draft are, ultimately, what makes it engaging. With the draft you’ve got high stakes and causality, which tell an engaging story that gets football fans from around the world to tune in for three days every year. Also, watching Mel Kiper Jr. and Todd Mcshay argue about what player to pick is my porn. These dudes do their research and pick apart every element that makes up a player: focusing not just on ability, but intangibles such as character and leadership. These guys understand that characters are what move the plot (and the draft) forward. And lastly, (and this will be informative and maybe depressing) – how the draft plays out is actually very similar to how publishing works.

What is going to happen next? That is why a lot of people read, watch TV, and obsess over mock drafts for months. The NFL draft is built on that question, but plot isn’t everything. Characters, along with stakes, fuel people's curiosity. Fans are invested in their team getting the right pick. Fans of the college players are invested in where those players go. Mock drafters are hoping they have made the right pick. Everyone watching is invested for multiple reasons.

About 99.9% of mock drafts turn out wrong because there are…draft trades! Teams trade up and trade down for a certain player. Trades provide great plot twists, because they are unexpected. One team’s gain is another team’s loss, leaving the loser to figure out a backup plan. Each pick is a chapter that affects the next one. If readers were as invested in your book as football fanatics are in the first round of the draft—you would have a perennial best seller for the rest of your life. But like I said, good writing isn’t just about plot and causality, it’s the characters that move the plot and story forward.

If writers would spend a quarter of the amount of time developing their characters as draft scouts spend scouting their players, they’d never have a wooden or flat character ever again.

If you’re a sixth rounder, find that agent or publisher who will play to your strengths and help you maximize your talents like Belichick did for Tom.

But it’s not just the scouts that do a ton of research. There is an NFL Network even though football season lasts less than six months. The draft gives the network something to talk about for a solid three months. There is also ESPN.

When I need inspiration for a character, I just put on ESPN and listen to Peyton Manning talk to Mel Kiper Jr. Mel is a master of character study and he also has epic hair. Kiper doesn’t just focus on the physical attributes of the player, but their emotional make up, their sociological background, and the it-factor that makes them good leaders.

ESPN and the NFL Network make sure their viewers stay interested in the players themselves. Fans get to learn about their first job, their favorite food, and what their friends think of them. They will want to see these young guys succeed, because they have become invested in them as human beings. There is always that risk, that the odds are against them, and they won’t have successful football careers. The NFL industry makes sure there is drama and high stakes surrounding these players, and that you need to know what happens to them, even if they are not on your team. It’s an art how the NFL makes you care about complete strangers.

This part will not be fun for writers to read, but publishing info is rarely fun. The NFL draft works very similar to how publishing works. I’m on both sides—as a writer and an editor of a press—and I see the parallels. If you look at publishing like the draft, one of the toughest things for a writer to do is realistically determine what round they would be picked in. We all want to be first or second round picks (best-selling writers), but a lot of all-time great writers started out as third and fourth round picks. Mid-list writers, to use a publishing term. But hey, there is nothing wrong with being mid-list (hell, it’s a goal of mine), and there is also nothing wrong with being even a fifth, sixth, or seventh rounder. Tom Brady was a sixth rounder! Most of us are sixth or seventh round picks, or even free agents (people that don’t get drafted but find a way to make a team.)

It’s ok, but it’s important to know where you stand. If you’re a seventh round pick and expect a Big Five or even a good small press to scoop you up when you haven't done a shitload of work—publishing is going to be miserable let down. If you don’t have a solid and loyal fanbase, a strong brand, or industry connections, you are going to have to work that much harder to get that attention. The good news is a lot of late rounders end up making teams and out-performing the first and second rounders, because they work harder and develop better work habits. The real goal is to get in the league. Then you let your talent keep you there.

Draft picks are based on potential, and writers can always continue to improve on that potential. A lot of fifth to seventh round picks end up becoming stars and get huge contracts or are traded for first or second round picks. The best quarterback of all time not named Dan Marino is Tom Brady. Despite being a sixth round pick, Tom found the right system and coach. If you’re a sixth rounder, find that agent or publisher who will play to your strengths and help you maximize your talents like Belichick did for Brady.

So will you be joining me to watch the NFL Draft? At least watch the first round to see what I am talking about. I have failed to bring together Sports Twitter and Poetry Twitter, but maybe I can bring together NFL Twitter and Writer Twitter? Actually, that probably won’t happen. But maybe you’ll start to see your work-i-progress like a quarterback sees the field, or how a coach sees their team. If not, please just send good vibes, a prayer or even a spell, that my Miami Dolphins draft Tua and rebuild a championship caliber team.

Thanks a lot for the incredible stuff.
For me, writing is always directly related to finding additional motivation. Thanks to you, I discovered a sports channel. I can say with precision that a writer should always learn, this is a non-reversible process. The main thing is to find a mentor. For me, Bestessayservicesradar has been an authority in this area for many years. This is a service where you can solve any writing problem and order an essay.Hope it will be useful for everybody from this community. I look forward to new headlines from you.