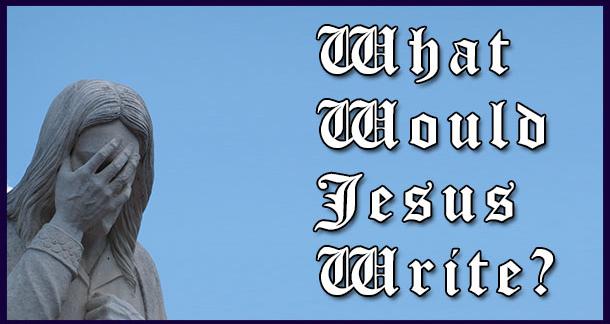 [The facepalm Jesus used above is used courtesy of tonystl]

Jesus of Nazareth was many things: motivational speaker, torture victim, trend-setter, political activist, and carpenter, to name just a few. However, while he's the lead figure in the best-selling book of all time, he didn't do much writing himself. But what if Jesus did write? What if he were writing today? Let's take a look at Jesus's tendencies to see what we can say about how he would approach modern writership.

Would Jesus have a pen name?

In fact, Jesus is a pen name. Depending on which passage you look at, his name was either Yehoshua (found by returning to the original Hebrew version of the Bible in Matthew 1:21), which is basically the Hebrew form of Joshua. (Fun fact: Yehoshua can alternatively mean either "God saves" or "a cry for help.") Or his name was "Wonderful Counselor, Mighty God, Everlasting Father, Prince of Peace" (Isaiah 9:6).

My own recent name change made it clear just how tricky adopting a new name can be, and Jesus's motives aren't entirely clear. Maybe Joshua was just too bland while "Wonderful Counselor, Mighty God, Everlasting Father, Prince of Peace" was holding up the lines at book signings. In either case, Joshua changed his name to Jesus Christ and, like many J.C.s before and since (John Cusack, Jim Carrey, Jennifer Connelly, John Cheever, etc.), he reached a powerful level of fame with his new title.

So, yes. Clearly Jesus would have a pen name.

What genre would Jesus write in?

There's some evidence that Jesus would opt for zombie stories.

Tough question. Let's start by eliminating genres. First, while the Book of Revelations definitely gets a bit sci-fi, that wasn't Jesus's shtick. It was John the Revelator who worked with dystopia. And I can comfortably say that Jesus wouldn't be an academic writer: His bout with the fig tree demonstrates that he had little respect for horticulture (Mark 11:13) and the entire "walking on water" thing shows that he clearly didn't understand physics (Matthew 14:25-26).

Of course, there's some evidence that Jesus would opt for zombie stories. Beyond his own celebrated return, we have the tale of Lazarus, which may not be quite so distant from current zombie representations as an initial reading suggests. As my friend Jesse Parent questions in his poem "Lazarus of Bethany," "I wonder what it was you saw in me after I came back from four days of death that made you decide you had better only try for three."

With the majority of Jesus's story using more subtle magic that interplays with urban settings and everyday struggles, I'll suggest that Jesus would write magic realism. But not just any magic realism: Jesus showed his elitist literary tendencies when he said, "He that hath ears to hear, let him hear" (Matthew 11:15).

The genre of choice for Nazareth's main attraction? Magic realism with a literary feel.

What would characterize Jesus's style?

Let's narrow it down a bit further than genre. What can we say about Jesus's storytelling style? Here we have a lot of evidence from the stories he told. Let's look at the parable of the sower as one example:

A farmer went out to sow his seed. As he was scattering the seed, some fell along the path, and the birds came and ate it up. Some fell on rocky places, where it did not have much soil. It sprang up quickly, because the soil was shallow. But when the sun came up, the plants were scorched, and they withered because they had no root. Other seed fell among thorns, which grew up and choked the plants. Still other seed fell on good soil, where it produced a crop—a hundred, sixty or thirty times what was sown.

Well, the literary feel is apparent. In the same way that today's literary writers can drone on for 15 pages about the metaphors entrenched in tying one's shoelaces, Jesus gathered a crowd and talked about seeds. These extended metaphors seem to be a key element in his style, but the language is far from florid. Jesus's pithy, direct style reminds me a bit of Hemmingway—and the passage above even scores pretty well on the Hemmingway App.

So Jesus's writing style would approach mundane experience through extended metaphors with a spare style of prose.

What themes would Jesus explore?

Many of the common themes for Jesus are well known. He revisited the topics of mercy, love, and equality again and again. But Jesus also tended for controversial political statements with socialist sentiments (e.g., "It is easier for a camel to go through the eye of a needle, than for a rich man to enter into the kingdom of God," Matthew 19:24). This got him into a bit of trouble. Perhaps he's a bit like Pablo Neruda? Only Jesus talks about bread less.

The subtle inclusion of sexual themes, including ambiguously homo-erotic ones (most notably seen with John the Beloved's closeness to Christ and Judas's kiss of betrayal), are also found throughout the story of the Gospels. Many of Christ's statements about sexuality go directly against traditional expectations. For example, to say that "in the resurrection they neither marry, nor are given in marriage" (Matthew 22:30) could be a nod to polyamory, asexuality, or various other non-traditional sexualities.

Would Jesus publish independently or traditionally?

Yes, I'm afraid it's true: Jesus would be an indie author.

As I recall, Jesus had a bit of a problem with the traditional institutions of his time. After the aforementioned incident with the fig tree, he tromped to the temple and started throwing tables and cracking whips. (This is the section of the Bible I like referring to as "Jesus's terrible, horrible, no good, very bad day." If only the fig tree was in season!) There Jesus told the traditional institutions and their legal teams to shove it, rejecting their focus on marketable pop content with no substance: "Ye fools and blind: for whether is greater, the gold, or the temple that sanctifieth the gold?" (Matthew 19:24).

Yes, I'm afraid it's true: Jesus would be an indie author. Not just one of the many who spam their content across their social networks every 10 minutes, though. Jesus was a social media guru, and the Twitter implications of "Come, follow me" (Matthew 4:19) should be apparent. He successfully started guerilla marketing movements ("I will make you fishers of men," Matthew 4:19), built a loyal following (though I'm not sure what exactly "multitude" means in terms of Klout score), and otherwise enlisted his network to help spread the word about his latest work.

So Jesus would be a social network–oriented indie author.

Conclusions: What Would Jesus Write?

For those trying to write like Jesus, here's a rundown of what we've figured out: Jesus would be a pen-named indie author who spreads word through his expansive social network. His work on the more literary side of magic realism is characterized by mundane experience being explored through extended metaphors in a spare prose style. He explores themes of love, mercy, equality, non-standard sexuality, and radical politics.

What do you think? Should we add anything to this list? Does Jesus remind you of any authors you know? And do you think that our boy Joshua could make it in today's marketplace? Leave your thoughts in the comments, below.

The 10 Books That Taught Me Everything I Know About Sex

I think Jesus would make a great subversive or transgressive writer. Also, he would publish under his full name using his middle initial, H.

I agree with Tom above about the subversion. His social justice aspects would stand as the lighter contrast to his megalomaniacal side. Let's not forget that he DID claim to be the son of the almighty, and anyone with balls that big would need to write in kind to feed that ego. He would probably bash out longwinded, dark diatribes regarding the exploits of the wealthy, while having working class-to-poor protagonists. Think Dickens and Steinbeck meets Bret Easton Ellis and David Foster Wallace. He'd serialize them too, and donate all the earnings to soup kitchens, homeless shelters, and liberal-candidate political campaigns.

Except....he wasn't liberal. Jesus was a bit of an anarchist. Or anarcho-Christian, making his own way.

Dino Parenti from Los Angeles is reading Everything He Gets His Hands On August 16, 2013 - 4:26pm

Agreed, Kelby. But alas, there are no anarchist parties, or even contrarian parties, unfortunately. If anything, he might donate the money to help bring the whole system down back to some agrarian basic model.

Fresh off of reading Zealot: The Life and Times of Jesus of Nazareth, I suspect that if he wrote at all (oral traditions would probably be his thing), Jesus-the-man would most likely be writing (1) screeds about the expulsion of non-Jews and foreign interests from Israel, (2) scathing and thinly-veiled parodies of the wealthy and lax interpreters of Mosaic Law, and (3) sermons about the virtue of asceticism. That is, until he learned that Christianity was spread in his name, at which point he'd devote himself to refuting everything ever written by Saul/Paul and all who picked up on those ideas in the name of Jesus. He would completely lose it, on learning who the Pope was and that he lived in Rome.

His style would target the poor and working class, and while he'd make heavy use of metaphor, it would use images that would be obvious in meaning to his contemporary readers. No literary pretensions from Jesus, just enough indirection to give him plausible deniability in court. Up until the time the Revolution truly took hold. At that point, the "Son of Man" would switch his byline to "King of the Jews in God's Kingdom on Earth."

His kingdom is within you, so he definitely would have been on the internet.

Also, you would have to say that he is a ghost writer, with 66 bestsellers.

Come to think of it, in today's world I don't think Jesus would ever get around to writing anything. After he read the stuff written in his name and about him, he'd nail himself to the cross, look to the sky, and yell, "Take me home,now!"

If not that, he'd certainly work on getting a cease and desist order against that jerk Paul.