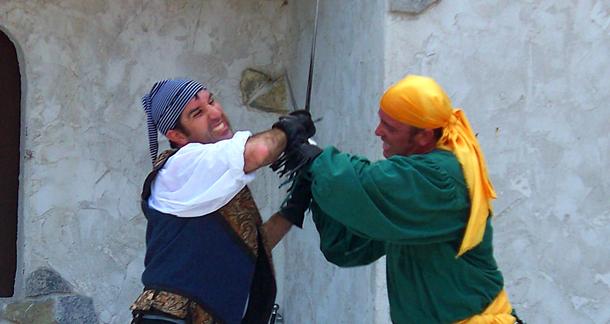 Five or ten years ago, if you asked anyone in publishing about the most polarizing issue in the business, they probably would have said genre versus literary writing.

I’ve spent the last couple of weeks observing both parties at CONvergence in Minneapolis and Thrillerfest in New York, and I have to tell you, the animosity between the two groups is very real—and probably growing.

This rivalry troubles me—the “us versus them” attitude seems like a dangerous way to view people who are essentially colleagues. But one interesting thing I’ve noticed about it is that successful indie authors seem to excel at certain things that traditionally-published authors tend to overlook, and vice versa.

Whether you release your own books or work with a publisher, here are five things each side can learn from the other.

What indie authors can learn from traditionally-published authors:

For heaven’s sake, pay an editor. And a proofreader. And a cover designer.

But guess what? You can have all that, too! There are many brilliant editors who do freelance work with indie authors. If you can’t really afford to hire them, you can find someone else who needs editing and offer a trade. (But definitely shell out for the cover designer. Worth every penny, I promise.) If you make your product look and read just as good as a traditionally-published author’s, no reader will care about the difference.

Keep an eye on your integrity.

Go to conventions as an expert.

I know plenty of successful indie writers who do meet-and-greet reader conventions, the kind where you eat dinner with readers and have a table where you sell your books. Those are great. But if you want that elusive professional respect, try going to the major industry cons as a writing expert. Sit on panels, teach a workshop, go to the cocktail parties and introduce yourself around. Yes, it will be harder for you to get in with the convention people than some of the conventionally-published authors, but if you weren’t tenacious you wouldn’t be an indie writer to begin with.

Whenever you’re appearing as a writer, I recommend dressing up a little. When I go to science fiction and fantasy conventions, where people regularly wear homemade costumes and/or yoga pants, I always wear a blazer, makeup, and decent shoes. This is partly because that’s my version of a costume, but mostly it’s because wearing business casual distinguishes me from the fans around me. It makes me look like someone who knows something about writing books. I’m not the only one who subscribes to this plan, either: when I was at Thrillerfest, I realized Lee Child was dressed in pretty much the expensive male version of my outfit.

Look at it this way: my mom used to tell me to dress for the job I wanted, not the job I had. If you look, act, and speak like a professional writer, you will be treated like one.

Use that professional persona.

Indie authors are famous for being able to engage with their readers. That’s fantastic. But there’s also such a thing as giving too much time to your audience, which can lead to a black hole of stress and unproductiveness. I suggest you think of it this way: you don’t actually want every reader to know you as a person… but you want them to think that they do.

The way to give readers the illusion that they know you is to cultivate a friendly and engaging persona, and let that be your public face to your audience. Your persona should be gracious, professional, and always respectful to your readers and to other authors, even bad ones.

Pro-tip: it’s okay if you don’t feel up to donning that professional persona—we can’t be “on” all the time—but if you feel that way, maybe stay the hell off the internet.

What traditionally-published authors can learn from the indie authors:

I know I just said distance is important, but so is being nice. Readers like authors who are personable, kind, and friendly. They’re far more likely to talk about, write about, and/or review your book if they like you personally.

Now, I know some of you are internally screeching, “But I’m an introvert! That’s why I write in the first place!” Fair enough. I’m not suggesting that you go door to door and introduce yourselves, but when readers seek you out, be nice to them. You know that old saying that you shouldn’t meet your heroes? That’s because it’s often happened that the hero in question turns out to be a douchebag. Don’t be that douchebag. Speaking of which…

With a handful of very rare exceptions, all authors start out in the same place, but some successful traditionally-published authors seem to have trouble remembering that. I’ve heard big-name authors bragging about their lifestyle or complaining about how one book out of twenty didn’t make the bestseller list, and it can be frustrating to the people who aren’t there yet. Maybe the curtains in your mansion get dusty and your diamond shoes are really tight, but we don’t necessarily need to hear about it—especially in a business as arbitrary and unpredictable as publishing.

Independent authors have found a lot of great ways to team up: on box sets, at reader conventions, and in online groups that share tips and give each other feedback. Learn from this. I know that contract limitations may keep you from collaborating, but you can still join forces to promote each other and pool your marketing resources.

Be proactive in your own marketing and PR.

Indie writers absolutely have to be their own advocates, because if they don’t, no one else will. But when you have a traditional publisher, it’s easy to say, “Oh, they have an in-house guy; I get to just skip off and write my next book. Whee!”

Sadly, unless you’re a top-tier sales success, the days of letting the publisher handle everything are over. Publishers have to invest most of their marketing budgets in a handful of writers, and there’s a good chance you won’t make that list. You can learn a lot here from indie authors, who pay for their own advertising, carefully watch their sales to see what works and what doesn’t, and run contests that engage and interest their readers. You can run contests and give away bookmarks, too, guys. Yes, it will take time away from your writing, and yes, that sucks. But this is the industry we work in.

Mind your own business. Literally.

Indie writers keep an eye on the trends—I don’t mean editorial trends, necessarily, but the ones in terms of the changing business. Knowing about shifts with Kindle Unlimited, iBooks, the newest e-reader, and so on, will help you understand your audience and your business in a way that’s impossible otherwise. Pay close attention to what’s working and what’s not working, and adjust your business plan accordingly.

The biggest, most universal lesson for both parties, however, is to be respectful to the other team. In fact, don’t think of it as an “other” team at all. Writers often suffer from the delusion that we’re all in competition with each other, but we simply aren’t. Readers don’t read a single book a year; they read one every week, maybe even every day. Authors might jostle for position on the nightstand (or, more likely, the e-reader) but we’re not competing with each other to be read.

We are, however, competing with Facebook and television and Candy Crush Saga and video games. (I myself often wonder how many books I might have read if I weren’t so excellent at Plants vs. Zombies 2.) These entertaining distractions are piling up, and every one of them pulls readers away from books.

It’s even more reason why authors need to close ranks, not divide them up. 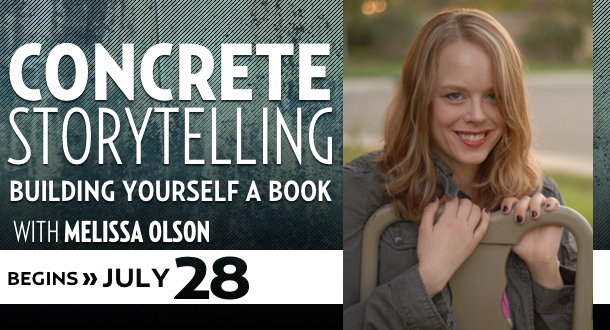 Writing a novel can be overwhelming. After all, that's a lot of words—all in a row, and they even have to make sense! Learn how to build the foundation for a book Melissa's four-week workshop, Concrete Storytelling, starting soon!

Melissa Olson was born and raised in Chippewa Falls, Wisconsin, and studied film and literature at the University of Southern California in Los Angeles. After graduation, and a brief stint bouncing around the Hollywood studio system, Melissa proved too broke for LA and moved to Madison, WI, where she eventually acquired a master’s degree from UW-Milwaukee, a husband, a mortgage, a teaching gig, two kids, and two comically oversized dogs, not at all in that order.

She loves Madison, but still dreams of the food in LA. (Literally. There are dreams.) Along with her Scarlett Bernard novels Dead Spots, Trail of Dead, and Hunter’s Trail she has also released a mystery novel, The Big Keep. Melissa’s work has been published in the Daily Trojan, the Chippewa Falls Herald Telegram, The International Journal of Comic Art, The La Crosse Tribune, U-Wire, Women on Writing.com, and the compilation Images of the Modern Vampire. She has also presented or been on panels at the Midwest Popular Culture/American Culture Conference, the International Association of the Fantastic in the Arts Conference, OdysseyCon, and EncountersCon in Wichita.

Excellent article with some great advice. I am still surprised that some indies skimp on the basics, like hiring an editor, proofreader and a cover artist. But I'm also shocked the way traditional authors still see all indies as lazy slobs who publish whatever we happened to write that morning.

I recently had an exchange with author Joe Hill (Stephen King's son), who compared traditionally published authors to brain surgeons who had been through medical school while indie authors were wannabe doctors doing cheap surgery at the mall. Maybe he should have taken this article's advice about modesty before making that particular analogy.

Still, I agree indies and traditionally published authors can learn a lot from each other. Hopefully some of the antipathy will fade over time.

I suggest you think of it this way: you don’t actually want every reader to know you as a person… but you want them to think that they do.

This is a brilliant way of putting it! I've been reading up on how to use my biog more effectively for marketing and attracting readers (I'm an indie myself) and this is a great guideline for that too.

Good advice but the big hurdle for every newbie writer is to become visible to readers, readers who like your genre. If you can't reach that audience, it's impossible to tease people away from Candy Crush and Posting and everything else that consumes their lives. Even those who like the kind of book you wrote want to know they will probably like it before they bother to look at it..