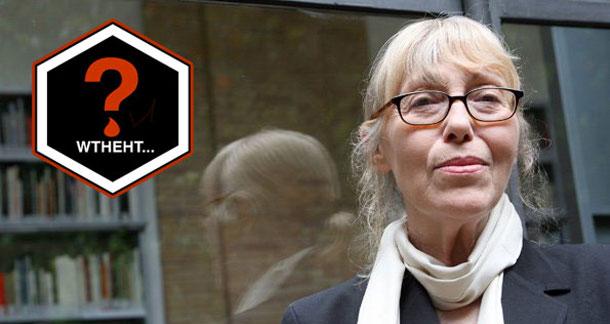 I know you guys love you some Geek Love. It's written all over the bathroom wall in the forums. In fact, the janitor keeps complaining about having to paint over all the So-and-so + Geek Love 4 Eva's, so cut it out. His knees aren't what they used to be.

Speaking of Geek Love, that book came out over twenty freakin' year ago!, which begs the question: What the hell has Katherine Dunn been doing this whole time?

As some of you might know, she announced a follow-up novel, Cut Man, waaaaaaay back in 1989. "The cut man in boxing is the person who stops the bleeding in a boxing match. The new novel is about boxing and serial killers,"[1] she told the press. Years later she would add, "I think you could probably say that in the same sense that Geek Love is a circus novel, which it’s not, Cut Man is a boxing novel. Not really. But it’s set in the world of boxing."[2]

Ten long years and no book later, it was rumored (hoped?) that she was still hard at work, scribbling away in a cave somewhere up in the mountains of Oregon. Fans started to get anxious, impatient. Inquiries were made. In 2004, her agent, Richard Pine, told the New York Times, "Katherine once told me that writers are like faucets... Some drip and some are on free flow. She drips, and she's happy dripping."[3]

The years continued to pass and Cut Man continued to trickle. Then, after many pots and pans emptied and refilled, a hopeful glimmer. In 2008 it was reported that Alfred A. Knopf had scheduled the novel for a September release. But before you could say Frabjous day!, the date came and went with nary a page made public.[4] A year later, Dunn was quoted as saying, "I’ve been through several drafts, and it is now in a stage where it needs severe cutting... and probably another draft."[1]

But the rent still needed to be paid, and Dunn hasn't been idle. In 1990 she published a collection of her Willamette Week newspaper columns entitled, The Slice: Information with an Attitude, AKA Why Do Men Have Nipples? (not to be confused with Why Do Men Have Nipples? And Other Low-Life Answers to Real-Life Questions). The collection is long out of print, and can be found used on Amazon starting at around 50 bones. Five years later she contributed text to the gory crime scene photo book, Death Scenes: A Homicide Detective's Scrapbook. Definitely not one for the gastrically sensitive.

What else? If Cut Man didn't completely give it away, Dunn happens to be a huge boxing enthusiast. She is an editor and writer for the website The Cyber Boxing Zone, and has covered the sport for numerous print publications. She won a Lang-Taylor award in 2004 for her work on the art project School of Hard Knocks: The Struggle for Survival in America’s Toughest Boxing Gyms with photographer Jim Lommasson. The collaboration was published as Shadow Boxers: Sweat, Sacrifice & the Will to Survive in American Boxing Gyms. She also released One Ring Circus, a collection of her boxing essays, in 2009.

Dunn on her affinity for the sport: "When I was a little kid, back in the middle of the last century, my Dad and brothers were interested in boxing but my mother declared it vulgar and barbaric and banned even the mention of it in her house. Naturally I was fascinated."[5]

So yeah, Dunn loves boxing. But you came here for new info on Cut Man, right? I found this tasty tidbit in a 2010 New York Times article:

Has Dunn’s vision of the novel changed much between then and now? “The blood and bones of the thing are still the same,” she said, “but the padding has changed a lot over the years. At one point I had hundreds of pages about a particular character, and had a lot of fun with him before I realized his entire function in the story could be performed by a few news headlines. He was more weather than personality. Another character got the boot just last November. Absurd, of course. And it’s rough on them. There should be unemployment insurance for fictional people.”

The article also alerted me to the fact that an excerpt from Cut Man had been published in the Paris Review under the title "Rhonda Discovers Art." How did I miss this? I clicked over, but damn those cock teasers at the Review, you can only read an excerpt of the excerpt online. A back issue is currently en route. Still, an entire chapter probably couldn't quench my word thirst at this point. So I decided to reach out to Ms. Dunn with a polite request for an update, which she graciously accepted. This is the latest and greatest, people:

Yes, Cut Man is set in the environment of small time, small town boxing. I’m still working on the novel and can’t give you an ETA.

Such a long gestation for a book is ridiculous, of course. There’s no reasonable excuse. All I can say is that this is the second time a novel has become a long-haul obsession for me — a complex world that I’m creating and exploring at the same time. When I run into an obstacle I put the book down until I can concoct a way around or through.

This is understandably irritating to those who keep track, and it tries the patience of anyone with a direct interest like, say, a publisher. I wish I’d kept my big yap shut about this one from the beginning. It took eighteen years to get from my second novel, Truck (1971) to my third, Geek Love (1989). All those years I blathered about the book I was working on, but only the bar flies were listening and they didn’t care.

However, I’ve continued to write short fiction, which crops up occasionally in magazines and anthologies. I’ve also done a fair amount of journalism. For the last thirty years, as you mentioned, I’ve focused particularly on boxing. The March ‘12 issue of Playboy magazine is scheduled to run my latest boxing piece—a profile of the late heavyweight champion, Smokin’ Joe Frazier.

So... not exactly the it-will-be-out-later-this-year news we were hoping for. Hell, it's not anything she hasn't been telling us for the last ten years.  But at least she's still plugging away. And as long as she keeps writing, we'll keep asking: When are we gonna see it? When will we have it in our grubby little hands (or on our finger-smudged eReaders)? We've waited for the book this long, so a few more years won't kill us. As long as it's just a few years. I figuratively pray to god that Cut Man is published in my lifetime.

What The Hell Ever Happened To... Harry Crews?

Man, I hope CUT MAN comes out. Thanks for the detailed article. Fascinating stuff.

Thanks for the reminder - haven't read this book in something like 20 years. Now, I have to find a copy...

Joshua Chaplinsky from New York is reading a lot more during the quarantine January 29, 2012 - 7:27pm

Thanks guys. She seems like she knows what she's doing, so we'll just have to cross our fingers and be patient.