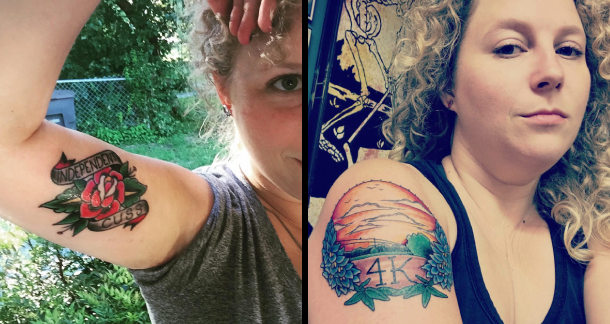 I recently put in some time in the chair with my favorite tattoo artist. This sounds like I have a lot of tattoos; I don’t. I have three, one of which is a little gray sun on my neck that I picked right off the board one random day when I was nineteen with fifty bucks in my pocket. I found this artist much the same way I found my sweet little sun—I drove around for a while with an idea and some cash until I got to a tattoo parlor with some cool designs in the window. You know, real scientific.

I walked in; Dan happened to be available. I explained what I wanted which included a lot of gesturing to pictures on the board, shoulder shrugs, and ums and maybes. Dan grinned, realizing he had a live one here.

Did y’all know there’s all kinds of tattoo styles? American traditional, devotion tattoos, flash, dotwork, customs… Maybe you did know this because you’re cooler than me. The point is, Dan knew it, and when he watched me gesturing and mumbling at the wall displays, he knew enough to understand what I was trying to communicate. What I wanted was American traditional, a vintage rose, beautiful and thorny.

(And yes, it does also have a banner shouting INDEPENDENT CUSS. Cue my mother seeing it and saying, “I’d rather it said Independent Young Lady.” Whatever. I LOVE this tattoo.)

Did I mention I love this tattoo? I love it so much. It was exactly what I didn’t know I wanted. It might have been created with pieces of my own ideas (a DRAFT if you will), but it was Dan’s knowledge of the craft that brought it to a polished finish.

After a year of my mother’s tears and feeling like a badass in a short-sleeved shirt, it was time to finally get that custom piece I’d been dreaming of for years. I had a vague idea of what I wanted—the message, a photograph to base it off of, some very uneducated ideas about what was possible in a tattoo. I had shared these same ideas with another artist years prior and his quick agreement (“Oh yeah, I totally see what you’re trying to do, yeah, no worries”) sent me running for the hills. It shouldn’t be that easy, right?

Case in point, when I shared the idea with Dan, he responded with “Cool idea, but—” and gave me some caveats to the current design and some suggestions for revision. We sat together for about an hour, drawing up the piece, erasing, drawing it up again. He disagreed with me, I disagreed with him, erase, re-draw, so on and so forth. When we were ready with the finished sketch sans coloring, I couldn’t get in that chair fast enough.

Four hours later, the sketch was on my arm and we were staring at it in the mirror, trying to decide on colorization. We had agreed on one thing going into it, but looking at it now, Dan thought it would be better served to fade the blue a different way to make it pop more.

If this scenario is anxiety-inducing for you, you’re not alone. But the funny thing is—in the moment, I wasn’t anxious at all. Sure, this half-finished tattoo was already on my arm for life and now we were changing the plan. But I trusted Dan implicitly. I trusted his knowledge of the craft and his ability to see what I couldn’t. Most of all, I trusted that he had my best interest at heart and that we shared a common goal—we both wanted to create a piece of beautiful art and we were willing to compromise to make sure that art was something we could both stand behind.

And that’s when I realized that what I had in Dan was a perfect editor.

I have spent over a decade in critique groups, feedback circles, workshops. I have been edited many times. I have reading partners galore. I have exchanged work with a staggering amount of writers—and out of that staggering amount, I only count a handful as my first readers, the ones I would trust with my writing life the way I trusted Dan with an unfinished tattoo that was already on my skin.

Sharing work is an incredibly vulnerable act. Providing feedback is an incredibly vulnerable act. Both of you need to be sure that the other person has your best interest at heart for you and the work. Your partner needs to know they can provide honest feedback without you biting their head off. You need to know that your partner will provide feedback that is centered on the work and not based off their own personal hang-up.

The only way to really gain the trust needed is through time. But miracles can happen—like it did with me and Dan.

Here are some ways to set your critique circle on the path to trust:

1. Center the critique on the work, not the people

Here are just a few samples of feedback that is commonly heard in critique groups and is absolutely unhelpful:

You may notice a common denominator in these statements—they have everything to do with the reader and nothing at all to do with the craft. Also, they’re just plain vague. (What’s boring? What’s great?)

Here are some samples of feedback commonly heard that are more helpful:

●           This character’s motivation isn’t lining up with their previous actions.

Note how nowhere in these statements is the word “I.” Not that great critique can’t also include a discussion of how the reader feels. But great critique always centers on the work, not the writer or reader. When you take the writer and the reader out of it, the tone of the conversation changes and feels safer for everyone involved. Dan did not question the idea behind my tattoo (which would have supremely shaken my confidence in a piece I knew I wanted)—he only suggested ways to improve the art itself.

That’s not to say that you should be “smarter” than your reader. Neither does it mean that your editor must be more versed in the craft than you and you must succumb to their every suggestion. Great critique is about give and take, push and pull, suggestion and reconsideration. It’s a conversation. A great reader/editor is one who questions your work in a way that forces you to go deeper. They are someone who is curious, who wants to know why you made one particular craft decision as opposed to another. They want to learn from you as much as you should want to learn from them.

Case in point—Dan did ask for the story behind my custom idea. Not because he thought the idea was dumb (every tattoo client’s greatest fear), but because he needed to know more about it so he could make intelligent suggestions to the design while still retaining the original message. Be curious without judgment.

Time and knowledge are the two most important assets any creative has to offer another. There are no instant substitutes for either of these. Every artist out there must grow their knowledge of their craft by putting in the time. So when someone else is offering to sacrifice their time to give you their knowledge (and vice versa), that is a transaction that must never be taken lightly.

So if someone offers to read your work, you better send them something that is ready to be read. Meaning, get as far with the draft as you can on your own, and only when you can go no further are you allowed to turn that draft over to them. Never give a reading partner (and certainly not an editor) the first draft that you dashed off in a fever dream just cause you wanted to have something to show them.

Maybe some of you would never do this. Great! But I’ve seen first-hand that 9 out of 10 manuscripts submitted for editing are far from ready for an editor’s eyes. Editors of literary journals will also attest that the majority of submissions they receive are in dubious shape, if they even follow submission guidelines in the first place.

Vice versa—if someone asks you to read their work, and you agree to read it, you better read their work and promptly. If you set a deadline with a partner, you better adhere to that deadline. Don’t ever ghost on a reading partner, even if you’re struggling with the critique. It’s not nice in the dating world and it’s not nice in the critique partner world either (which is pretty much exactly like the dating world.)

Showing respect as a reader isn’t about handling someone’s work with kid gloves or only saying nice things and not mentioning all the times you wanted to pluck your eyes out. It’s simply about not saying “I wanted to pluck my eyes out at this part” and saying instead something like “The pacing here feels very slow and repetitive. You might want to brainstorm ways to speed it up.”

You don’t have to like every single thing your critique partner sends your way, nor should you expect them to love every piece you write. But you should expect to deliver and receive critique with utmost respect. Because it is the mutual respect that grows the trust fastest.

Dan’s told me about some stinkers of tattoos he’s put on people’s bodies. Aside from most being poorly-planned ideas or impulse tats he knew the person would likely later regret, the ones that stunk the worst for him were ones where the client was simply inflexible. They wanted their idea the way they wanted it, never mind the fact that Dan was the professional who knew the idea wouldn’t translate, wouldn’t age well, or just simply wouldn’t look its best. It was never about whether Dan liked the idea or not—it was about whether Dan was allowed to work with the client to make the idea the best it could be. Because at the end of the day, the client had to wear the piece for life.

When he finished adding the final colors to my arm, acting on that left turn we agreed to last minute, we both went to the mirror to admire the work.