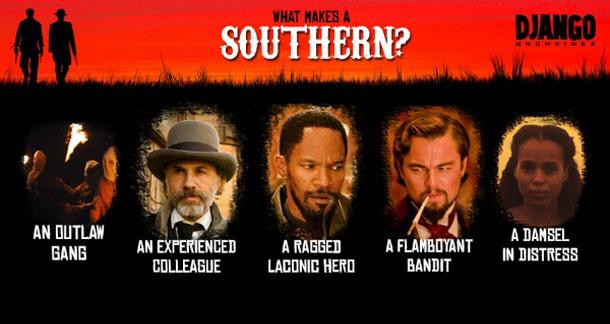 This week brought the release of Quentin Tarantino's Django Unchained, a revenge epic about a freed slave turned bounty hunter who dares to vanquish mountains, the law, and death itself to rescue his beloved Broomhilda. Tarantino has referred to the film as a "southern" rather than the more traditional western, and the marketing department for the film released the above graphic to delineate the relatively uncommon film category.

The southern novel doesn't only take place in the South -- there's more to it than that.

So what makes a southern film, according to Django Unchained? An outlaw gang (specifically, the Ku Klux Klan), an experienced colleague (the great bounty hunter Dr. King Schultz, played by the equally great Christoph Waltz), a ragged laconic hero (the eponymous Django, played by Jamie Foxx), a flamboyant bandit (Leonardo DiCaprio's diabolical Calvin Candie) and a damsel in distress (the aforementioned Broomhilda, played by Kerry Washington). Okay, I can buy that. Tarantino takes many of the qualities of the Sergio Leone spaghetti westerns he loves so well and transplants them to the South. But does that mean the only truly specific southern aspect of the film is that of slavery?

That got me thinking -- what makes a southern novel? The southern genre is far more prevalent in literature than in film, with Faulkner and Twain and O'Connor and Welty all turning in classic examples. And with this rich history of southern literature, the genre has had time to grow into a more defined, nuanced interpretation of the region. The southern novel doesn't only take place in the South -- there's more to it than that.

So let's take a look at some of the most quintessential specimens of the southern novel, and what they have in common.

So what qualities do these novels have in common, linking them all to the broad concept of a southern novel? Other than each having been written in the South, about the South and by an author from the South, that is. These novels communicate the triumphs and challenges of family, how it can buoy us or drown us, how our matriarchs and patriarchs can be either our salvation or our doom, or sometimes both all at once. Many of them illuminate the notion of home – of wanting to escape home, of returning home, of the idea that home never truly leaves us, no matter where we may ramble.

And more specifically, a southern novel often deals with a loss of idealism, the death of innocence. Not only in its characters, but in the South itself, the impeccable dream of the antebellum region marred by its true, bloody history.

For slavery, as well as racial and economic inequality, make up the inescapable reality of the South, and any accurate representation of that area must delve into this ugly history. Django Unchained is in some ways about family, about home, about the death of innocence. But Django, and so many southern stories before it, are truly about inequality. The history of the South is a beautiful dream, but it is a false dream. The most important southern novels do not shy away from this history – they accept it.

For slavery, as well as racial and economic inequality, make up the inescapable reality of the South, and any accurate representation of that area must delve into this ugly history. Django Unchained is in some ways about family, about home, about the death of innocence. But Django, and so many southern stories before it, are truly about inequality.

The history of the South is a beautiful dream, but it is a false dream. The most important southern novels do not shy away from this history – they accept it.

I don't even know what that means. To paraphrase: The history is a dream—beautiful, but false. Important works of long-form fiction don't shy away from this false, yet beautiful dream; they accept the false but beautiful dream.

The Southern novel is one of my favorites to read, because of the characterization of the South. I haven't been to see Django... yet, but am looking forward to it. Faulkner and I have a love-hate relationship, but I appreciate the darkness of his books. He never held back, but you are absolutely correct about the history of the South. Even in Faulkner's books there is a very folkloric quality to the stories. If you've read Absalom, Absalom!, there is a great scene in which Thomas Sutpen is described as emerging from hell with fire in his beard. This plantation man is characterized as a literal demon from hell, which makes his cruelty more prevalent in the text. There is beauty and darkness merged together in his books. We see the grit and grime on the shiny veneer. Even with a book like Gone with the Wind you get the ball gowns and romance, but we can't forget that Rhett Butler is a racist pig.

Very good article. I enjoyed it. I'm not sure how I feel about Django. I will probably see it, even though I am hot and cold with Tarantino. I am a big fan, however, of the writers you mentioned. I am not from the south, but being from a poverty-stricken rural area, I always felt like I could identify with the sense of clutching onto minor dreams in the face of impossibility that seems prevalent in Southern literature, and the conflicting sense of home.

Dwayne from Cincinnati, Ohio (suburbs) is reading books that rotate to often to keep this updated December 29, 2012 - 2:00am

I kind of think you summed it with,

... written in the South, about the South and by an author from the South...

SarahElizabeth from Pennsylvania is reading All the Light We Cannot See; Monster January 6, 2013 - 5:58pm

I will concede that the novels mentioned (To Kill a Mockingbird is a favorite) all deal with inequality in varying ways. But would it be possible to author a southern novel that did not deal directly with this concept? I think so.

(I was thinking of Jacob Have I Loved... but darn it... it deals with inequality between SISTERS. I can't win.)