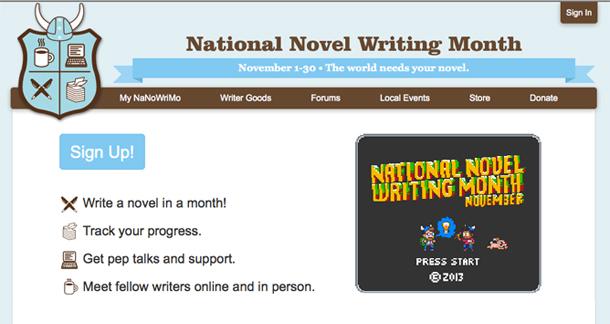 I read the text message once, twice, began to read it thrice before I realized it was a waste of time.

"Yes, but I'm not doing it through the website," my fingers Swyped.

The initial message, from a friend: "Are you doing NaNoWriMo? If so, what's your screen name? I'll add you."

Truthfully, I didn't even know there was a website for National Novel Writing Month. Apologies to my friend, if he's reading this. I was one of those people who pretended to know what was up. We all hate those people.

Make notes on napkins during meals. Talk about your story with a friend while you're doing yoga. Visualize scenes in your head while you're pooping.

Maybe I did know there was a website. There's a website for everything, right? But I sure as hell didn't know you signed up on there to participate in NaNoWriMo (OK, participate officially). I didn't know you could track your progress, connect with other writers, bitch on forums, find local NaNoWriMo events. Damn. Hell if I knew what I was doing. I just wanted to write a novel in a month. Wasn't aware there were official procedures.

Turns out that was the first lesson I learned during my first foray into NaNoWriMo: Sign up on NaNoWriMo.org. I learned a few other things, too.

I have this problem a lot when I write fiction. I set deadlines and I make a schedule, but I never abide by it. Ever.

Deadlines make me feel claustrophobic, boxed in. Which is odd, because I've written around deadlines professionally for the last seven years. But with fiction, it makes me feel like I'm forcing myself to write, and I hate that. Yes, getting words on paper, even if you're forced, is a great, great thing. But for me, feeling forced to do it for whatever reason is no fun. I want it to just happen. That's where the fun is. And that's more rewarding.

The thing with NaNoWriMo is, it's not so much a deadline in terms of time. It's the word count. Fifty-thousand words in thirty days is not a lot (only 1,666 words a day), but for someone like me, with a full-time job and other responsibilities, it can feel a bit overwhelming to stick to that.

I look at NaNoWriMo like a writing exercise on acid. And with any exercise — and any story — you make it your own. Do what you can. Don't feel confined to the system.

I'm piggybacking a bit off Cath Murphy's 5 Bullshit Reasons for Giving Up on NaNoWriMo with this lesson.

Yes, my full-time job and other responsibilities are no excuse, as good as an excuse as each of those may be. Everyone has other things to do. Not everyone can get in front of their computer or notepad and write, write, write without interruption every day.

The best thing you can do in that situation is contribute to your writing on other levels, in other ways. Make notes on napkins during meals. Talk about your story with a friend while you're doing yoga. Visualize scenes in your head while you're pooping.

To me, writing isn't always writing. It's working on your story at any moment you can, in any way you can. It's thinking about it when you can't get to your computer or when a notepad isn't handy.

I heard Mark Z. Danielewski speak during a panel at the Los Angeles Times Festival of Books a few years back. Someone asked him about his writing process, and, if I remember correctly, he said he didn't like to read while he was working on his fiction. (Correct me if I'm wrong, Z.)

Well, no offense to Danielewski — and I mean that; you may have noticed he's noted as my favorite author in my profile on this site — but fuck that. I say read, read, read as much as you can. Fiction, nonfiction, comic books, children's books. Watch movies. Play video games. Listen to music. Ideas will come from these things, believe me, and that will only help your writing, NaNoWriMo or otherwise.

There is a slight downside to this. You may tend to write in the style of what you're reading or watching, in a certain style that may not fit you or your story. Try to be cognizant of that. If you're reading Chuck, don't write like Chuck (unless you're writing Fight Club 3: Angel Face's Revenge, then by all means).

I've always thought it was important to have something of influence to go back to while writing — a book, a film, your favorite Manga, anything. NaNoWriMo, even with its word-count parameters, is no exception.

My first attempt at NaNoWriMo wasn't very successful. I didn't write every day, and I wrote only 9,032 words. Pathetic, I know, but I'm proud of every single one of them, and I'm well on my way to crafting the story I want. Really, that's what you're after in the long run.

What about you? What was your NaNoWriMo experience like? Let me know in the comments below or hit me up on Twitter @ryanpeverly.

I did my best, but work decided to pile up work on top of the work I was doing, which was piled on top of some other stuff that work required. By the time I had a free moment to write, I was wasted and unable to type anything.

Unfortunately, my work involves a lot of writing as well.

Can't wait for the holiday break to get back to it.

At least you're writing...

Thanks for the nod Ryan. I joined NaNoWriMo, but only to get some insight for my article. There is no way in the world, even if my children and pets were held hostage, that I would ever attempt to write fiction to someone else's schedule. It would kill my creativity stone, cold dead.

That said, I salute anyone else who gives it a try - I can see that it's a good way to get into the habit of writing and that is a very useful habit to acquire.

I'm with you, Cath. I can't abide by anyone else's schedule. The forcedness of it is counterproductive to my writing.

Thanks for reading, too. I enjoyed your five bullshit reasons, all of which I've used before.