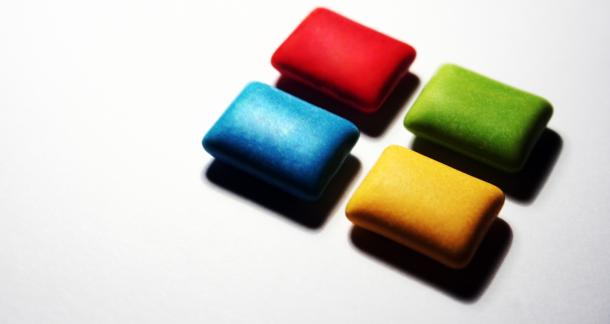 Microsoft Word has always been that know-it-all prick that's correcting your spelling and grammar. It HAS to interrupt you while you're talking, and you get the distinct feeling that it's not really listening to what you're saying. It's like telling your friend, "And that's when my dad done died." and your friend says, "You really shouldn't say he 'done' died."

Are these new, beefed-up options bad? Do I just hate being told what to do? Do they signal the death of human intelligence? Am I threatened by that? Are these the same questions I ask when a sandwich joint makes menu changes?

I pulled Microsoft's descriptions for some of their newer features, what they do and how they function. Let's take a look.

Targets complex and abstract words, and suggests using a simpler word to present a clear message and a more approachable tone. Example: The magnitude of the problem is far beyond the scope of humanitarian aid. Magnitude would be corrected to size.

I don’t have faith in Word’s ability to do this well. Take, for example, a situation where the word “magnitude” is better than “size.” The "magnitude" of a surgical procedure to save a hedgehog makes more sense than the "size" of the procedure, unless you want to hear jokes about it. Which you don't. Hedgehog surgery is serious shit.

I'm harping on one example, but if it's the selected example, you'd think it'd be rock solid, right?

Targets jargon, technical terminology, or abbreviations which may confuse readers. Consider using more common language that is likely to be understood by everyone. Example: The company hired a well-known headhunting firm. Headhunting is corrected to recruiting.

If Word is successful in this endeavor, the result is a homogenized, corporate voice.

Jargon exists because there is the need for specificity. A "headhunting" firm (terminology I understand is leaving the common lexicon, but we're working with the example we were given) is a term that makes a point of what the firm is doing, and also that they're doing it in a shady way. When someone uses a term like “headhunting,” they mean headhunting, not recruiting.

Here comes the part where I reveal that I'm a grumpy old man.

Writing is like any craft. Pottery, let’s say. Pottery is something that could go out of style pretty damn fast. 3D printing is, basically, pottery. But you know what the difference is? The human being isn’t satisfied in the same way by the acts of programming a 3D object and throwing a vase on the wheel. These aren’t the same thing.

Writing is that way too. We may very well see the rise of AI authors in our lifetimes. More likely in your lifetime than in mine. I eat A LOT of pork. But people will continue to write. Even though it's easier to have this stuff corrected automatically, we're starting to butt up against the lines where writing is a craft, and part of craft is understanding that the most efficient way to do something is not going to be the most satisfying, and therefore might not be the "right" way.

Targets passive voice sentences with a known actor, i.e. a known subject. Use active voice whenever possible to be more concise and avoid possible confusion. Example: The dog was seen by the man. This will be corrected to The man saw the dog.

The correction of passive voice is good. Except when you work in a place where you have to say something happened while not assigning blame. Or, as these places are known, every office in the world. Give me Passive Aggressive Correction. THAT I'm interested in.

In the description of wordiness, I can cut 6 words with no effort:

I can only assume these descriptions were created in Word while using these new corrective settings. Not giving me a ton of faith here.

If I were editing the example sentence, I would tell this writer that the word "old" is the more challenging problem. "Largely" you can cross out, but what are you going to do about "old" in here? What does an "old" bottle look like? What are the shapes? Colors? Smells? What do the labels look like or feel like if you touched one. I would tell this person to have the character pick up one of the bottles, touch it, and give us the information in a way other than "old."

This is good minimalist practice, and it helps the prose to get rid of the word "largely." But this doesn't turn into good writing until you go further.

Words in Split infinitives (more than one)

This is such a minor matter of taste as to be ridiculous. Also, there are situations where this is not preferable. How about jokes?

I’m going to tell him to fuck off politely, respectfully, and with the utmost respect.

I’m going to tell him politely, respectfully, and with the utmost respect, to fuck off.

Matter of taste, but it’s not hard to come up with scenarios where these rules offer critique that's objectively wrong.

The problem with technology-minded people is that they see the world as a series of problems to be solved, and all of those problems are solved through technological solutions.

Hmm. I wonder if a rebuke from MS Word might be a good thing. It allows people to think about this and be corrected in a private setting. I've heard multiple people start to say "fireman" and stop and correct halfway through. It's something that we're working to unwind, and this is a way we can be reminded about it without hurting someone else with the learning process.

Pass on this. Hard pass. This is how people talk. If you, like me, like writing that sounds the way people talk, then this is not going to work. Now, I WOULD be more interested if Word offered folksy, amusing replacements. "Between the devil and the deep blue sea," for example.

Targets contractions (e.g., let's, we've, can't) which should be avoided in formal writing, such as in legal documents. Example: The animal won't be authorized to be out of the bag during the flight. Won't will be corrected to will not.

I misread this example and thought it said "The animal won't be authorized to be out of the bag during the FIGHT." This was a very confusing mistake. What animal? What bag? Why is this animal present at a fight and confined to a bag?

Now that I get it, I understand that MS Word is coming out as anti-animal. I think the best way for us to handle it is to toss blood all over our computers.

If there’s one thing I don’t think the world needs, it’s more formal language. How much better would you feel if the airline sent you an email that said, "We fucked up. I'm sorry," instead of "We apologize for any inconvenience"?

You can be professional and helpful and still be a person. These things are not mutually exclusive. The sooner we embrace that, the better.

Targets regional expressions or slang terms which may not be understood by a general audience, and should therefore be avoided in formal writing. Consider using more standard expressions. Example: My cat barfed all over my homework last night. Barfed is corrected to vomited.

The problem with technology-minded people is that they see the world as a series of problems to be solved, and all of those problems are solved through technological solutions. The right software, the right interface will fix anything.

I propose a different solution in this case.

When we talk the professional side, someone sends me an email that has the passive voice, do I need that corrected? Do I understand what they're saying? When someone's a little wordy, so what? I still understand it. I still get what I need from it.

If Word is successful in this endeavor, the result is a homogenized, corporate voice. All we've done is "solve" the "problem" of people sounding like...different fucking people.

Jane Wiseman from living outside of Albuquerque/in Minneapolis is reading Look to Windward by Iain M. Banks March 7, 2018 - 10:30am

They've always sucked. As a former college English teacher, I can think of several students whose grades went up a whole letter once I convinced them to stop using the damned grammar checker. Not worth the digital medium it's imprinted upon.

When working in with Office 365 always remember to protect your data in case something happens. I wrote my book in it and accidentally deleted it. So I had to learn how to recover deleted items in Office 365 with the help of SpinOne. I was able to recover everything that I had lost and thankfully no damage was done.

This goes well beyond grammar checking.  These suggestions are intrusive and insulting.  If I am trying to convey that, "The information appears to be correct" then no, I do not want to say, "The information is correct."

These two sentences are not synonymous.  So not only is it intrusive and insulting, it's WRONG.

You can turn this off. You shouldn't have to, but you can.
These instructions are slightly outdated because they say to click the "3 dots" to the right of the [Send] button.  The settings are now exposed by the pencil icon to the right of the smiley.

I don't doubt that the settings will revert to 'on' after the next update.  Sigh.

Hey Yush, you need to ar having trouble with Microsoft Solitaire Error Code 124 on Windows 10. To fix this check that Windows Updates aren’t stuck. This can be verified by Tapping the option of Start, write Windows Updates, and tap the option that says Check for Updates. Press Check Now and tap on View Details. In the end, install any updates you find that have not been installed like the optional ones and restart your PC again. For further information try https://appuals.com/microsoft-solitaire-error-code-124-on-windows-10/ on this website. At times you can check and log in then and tap Support to see if it says Xbox Service is up or Xbox Service is limited or Xbox Service is down. If it is down or limited then you may not be capable to log in to your game till it is resolved.

In my humble opinion, the only time words should be invented is if they create some clarity in describing a situation. In five years, the odds seem low that anyone will take a knee and put their fist to their forehead while onlookers mumble, "What do people call that? I wish there was a word describing that gesture."sneaker for men