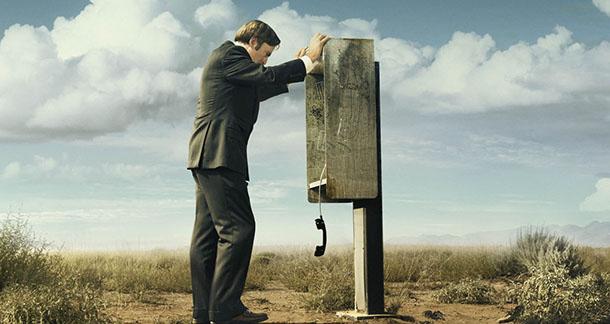 Crafting a successful spinoff series is one of the toughest tricks in television. It feels like the ghost of Joey haunts every current attempt to extend or expand a successful show's existing universe.

Want an even bigger challenge? Tackle a spinoff of Breaking Bad, a nearly perfect, almost universally adored drama that contained one of the best slow-burn character arcs in TV history.

Luckily, Better Call Saul's "Uno" begins one of the best slow-burn character arcs in modern television with a master-class in character development.

I'm going to focus on character development moments from each act of "Uno," each of them using a precise deployment of curiosity and restraint to create a compelling pilot.

A spinoff requires a delicate balancing act — service the fans of the related series that are turning in for an update on a favorite character, all while hooking a new audience. Too fan-servicey, and you fail. Too vague or distant, and you lose your valuable, built-in fanbase.

So it's no surprise we open in a flash forward as "Saul Goodman" has now transformed again, this time into "Gene," a manager at a Cinnabon in Ohio, embodying his classic line from Breaking Bad.

Moments later, he puts in his old "Better call Saul!" commercials and begins to cry. Crying feels like an on-the-nose way to express grief and loneliness but against the backdrop of goofy lawyer commercials, it's particularly effective.

A teaser's job is right there in the name. The goal is to stoke a craving in the viewer, and then the writer's job is to not deliver satisfaction for that craving for as long as possible. The most artistic teasers do this as flash forwards without context, as Breaking Bad famously pulled off episode after episode.

The stakes are raised even higher in BCS. We won't get to that black and white version of Saul for a long, long time — if ever. 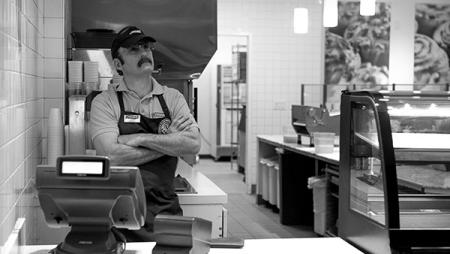 Act I: Save the Cat

An inferior show would be less patient with this development. We may cut right to him walking out of a lost case, complaining about pay, and save about six pages of script space. But here, we follow Jimmy as he battles for his clients' innocence in the face of certain defeat.

In many ways, this is a "save the cat" scene — we respect Jimmy's gumption and effort. We tend to adore characters who face down long odds. And, we get a laugh at the end of the scene as a bonus, when we see that he's up against video footage of his clients humping a severed head (trust me, it's funnier on TV).

Jimmy's past is also important. "Slippin' Jimmy" is one of the most critical aspects of Better Call Saul, and in my opinion, it's this part of Jimmy's life that sets this show firmly apart from Breaking Bad. If BB is about Mr. Chips turning into Scarface, then Saul is more like Unforgiven, where a weary, financially-stressed gunslinger struggles to do justice without reverting to his old, illegal ways.

Slippin' Jimmy represents Jimmy's internal conflict while serving an external conflict, as it drives one of the primary wedges between Jimmy and his brother, Chuck.

So how do we introduce Slippin' Jimmy? In dialogue? In flashback? No. Our first hint is when someone else tries to hustle Jimmy. He immediately identifies the scam and schools the boys in all the ways they could improve their hustle results. We sense it right away — Jimmy has some morally-ambiguous hustle to him.

Once again, a clever scene that emphasizes the creation of curiosity. Anything else is just exposition.

In this second act, curiosity is again put forth before exposition. We still haven't met Chuck, but we know how much Jimmy loves his brother thanks to his confrontation with the partners at HHM.

As Jimmy argues about Chuck's stake in the firm and his brother's condition with Howard, the showrunners are doing nothing but raising questions in the context of a terrifically acted confrontation. We're engaged on a surface level, but asking ourselves: what is wrong with Chuck? Why is he gone from this firm? Jimmy is a lawyer; why doesn't he work with his brother?

And lastly, we meet Kim Wexler. Jimmy notices her smoking, comes up to her, saying nothing. They're familiar faces acting organically in this situation. He takes a drag off of the cigarette. Kim is the angel on his shoulder, and their first on-screen meeting is one of genuine familiarity that puts our curiosity as viewers before explaining their relationship.

Act III: The Calm Before the Storm

In Act III, it's critical to set up the various story threads for collision. It makes for a satisfying payoff.

"Uno" accomplishes this while giving in to one of our curiosities, and we get our first clash of the titans as Jimmy and Chuck are on screen together for the first time.

Chuck is eloquent at expressing his ideas and doesn't spare Jimmy's feelings. The coarse nature of the character allows some latitude for getting information across while staying true to character, such as when Chuck tells him that helping people is more important than money.

What is critical between these two characters is that even in their first exchange, they are both right and both wrong at the same time.

Jimmy is correct that Chuck deserves more from the firm he built; Chuck is correct in hoping to keep 126 employees he presumably knows or helped hire working instead of liquidating the firm to pay him. Yet, the ideas conflict.

This interplay with Jimmy and Chuck lasts over multiple seasons and creates an incredible amount of pathos and drama, a truly complex conflict that keeps viewers hooked.

If I may comment on season three, it's clear to me that Jimmy and Chuck are still largely both right and wrong about each other. Jimmy is correct that Chuck is mentally ill and a horrible, asshole brother. Chuck is correct that Jimmy can't resist playing fast and loose with the law, and probably shouldn't be a lawyer. Jimmy is wrong to make Chuck out to be an incompetent attorney, damaging Chuck badly to win the Mesa Verde account; Chuck is wrong to extract revenge on his brother by secretly taping him in a plot to cost him his law license.

I expect this trend to continue as long as Chuck is a fixture on the show. 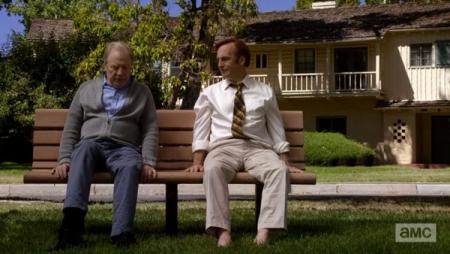 I haven't mentioned the core plot of this episode yet. However, a big client that Jimmy was trying to get is stolen away by HHM. Jimmy needs money — for himself and for Chuck, and sticking it to HHM is a bonus.

Jimmy taps into "Slippin' Jimmy" for the first time to get the job done.

The presumably "throwaway" hustlers from the first act are recruited by Jimmy as part of his scheme. Now, he gets to talk about his past as "Slippin' Jimmy" with more purpose and context. We're engaged. This isn't exposition, but him selling the aspects of a plan to prospective assistants.

As viewers, we're not sure how all the pieces are going to fit, so again, curiosity drives us forward as the plan comes together.

In most movies, the finale has a "hightower surprise" (a Blake Snyder screenwriting term I particularly like) before the hero digs down deep to win the day.

In the final act of "Uno," the surprise comes when Jimmy's plan goes wrong. The car hits the boys as planned — but doesn't stop. As Jimmy gives chase, we discover that the wrong car is followed to the worst possible front door — Tuco, a familiar bad guy from BB, points a gun at Jimmy, and drags him into the house as the episode ends.

The ending is straightforward but genius: we get a fan-service ending (Tuco is a familiar piece of the BB universe, an explosive, dangerous, and violent character) along with a compelling cliffhanger for casual viewers, who by now, presumably like and respect Jimmy and want to make sure he's okay.

You can't pull a cliffhanger at the end of every episode, but Better Call Saul is a show built on patience and restraint in both scenes and story development. For example, in some episodes, over twenty, silent minutes are spent on most of Mike's meticulous traps and plans. Also, we're in season three, and the story is just now getting to Gus and the titular Saul transformation.

So, it makes sense to use a cheap cliffhanger to get everyone into the second hour of the story in the series' infancy, an opportunity to sink the hook even further.

If you take anything away from "Uno," let it be the strategy of building character and curiosity, layer by layer, in restrained and particular ways.

This may sound like a grand rewording of "show, don't tell," but consider how this episode could look with some logical reordering. The "Slippin' Jimmy" explanation could be crammed in a lot earlier, and Jimmy could confront his brother before he has his confrontation at HHM.

Same story, but it reduces the addictive qualities that intensify curiosity.

Better Call Saul deserves its own place in the prestige TV pantheon, and "Uno" is a terrifically crafted episode. I give this pilot five out of a possible five aromatic, oven-fresh, gooey, legendary Cinnabon classic cinnamon rolls.

Good article, though I skipped section 3 and jumped to the final thought (thanks for the spoiler heads-up).

I do agree a lot could be learned by dissecting this show. It's downright excellent at pulling off the "show, don’t tell" adage (among other things also mentioned in your article). It sort of baffles me BCS doesn’t pull the kind of view numbers BB did (according to Wikipedia); maybe it doesnt have enough meth addicts getting their heads squashed by ATM machines...

I hate to be "that guy" but after Saul goes on the run and becomes "Gene," he is working at a Cinnabon in Omaha, Nebraska. Not Ohio. Being a Nebraskan and a big fan of the show, it pains me to see Ohio get the credit for Jimmy's new home.