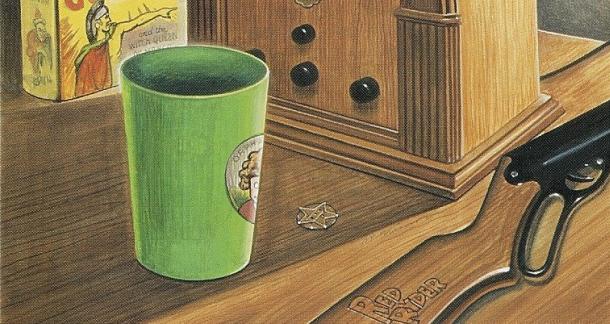 This movie is so damn ubiquitous that the only thing I’m interested in is when they’re going to change the name from A Christmas Story to THE Christmas Story. I suppose that puts Ralphie in direct competition with Jesus, but I don’t see anyone running The Passion of the Christ on a 24-hour marathon.

There’s not a lot left to mine in the movie. But don’t fret, leg lamp lovers. There’s more A Christmas Story to be had if you’re willing to dive back into the books.

If you’re into humorous recollections of a 1950's Midwestern childhood that occasionally veer into “walked to school uphill both ways in the snow” territory, you’ll dig it.

Everything starts with Jean Shepherd.

Shepherd was a radio personality in the 50s and 60s. He told stories. Maybe like an old-timey David Sedaris or something, or a precursor to Garrison Keillor, but with a little bit of mischief mixed in.

One of his more famous stunts: Shepherd initiated a prank where he asked his listeners to go to their local bookstores and ask for a non-existent book called I, Libertine. Shepherd's devoted listeners even collaborated to create a fake author, Frederick R. Ewing. Then they created a fake backstory for Ewing, saying he was well-known for his BBC Radio talks on 18th century erotica.

Shepherd's listeners came through, and they requested the book en masse. Some accounts say the hoax book did in fact make the NYT Bestseller list. But that’s only half the weirdness.

In what has to be one of the most backward-ass publishing ventures ever, because there was demand for the book, publisher Ian Ballantine met with Shepherd to discuss creating I, Libertine. Ballantine then hired Theodore Sturgeon to ghostwrite. I, Libertine hit the shelves. You can still buy it today, and reviewers will tell you it's not so bad, considering that its entire creation was a joke.

But I, Libertine wasn't the only book of Shepherd's that had a difficult birth.

Shepherd's other books started as semi-outlined stories Shepherd told on his radio show. Shel Silverstein, who you may know from The Giving Tree and other books that seem harmless as a child and are devastating as an adult, encouraged Shepherd to write his stories down and sell them in book form. Shepherd wasn’t into it. He wasn’t a writer.

The legend goes that Silverstein transcribed some of Shepherd’s radio shows, and the two edited the texts together. Some of the stories appeared in Playboy and were eventually collected in In God We Trust: All Others Pay Cash (1966), which provided most of the basis for A Christmas Story, along with Shepherd's later title, Wanda Hickey’s Night of Golden Memories: And Other Disasters (1971).

It’s hard to say at this point. When I’m reading the book and Ralphie is opening Christmas presents, there’s not a whole lot of surprise that his Red Ryder BB Gun is hidden behind the curtains. When Ralphie is decoding a secret message with his hard-won decoder ring, I already know it’s going to be a big letdown.

It’s hard to say definitively because the movie was not only first (for me), it was WAY first. Like 25 years first. And because so many of the details are so strange, because so much of the greatness is the surprise of watching Ralphie’s dad open that leg lamp, it’s hard to say whether I might prefer the book if I hadn’t seen the movie first.

That said, the movie has undeniable merits.

The movie trims a lot of the fat. There’s a framing story in the book. A grown-up Ralphie is home for Christmas, sitting in a bar, remembering stuff with a grown-up Flick. The movie used the narration to fill in the adult side of things, and it sped things along.

Things are inflated in the movie, in a good way. In the book, Ralphie gets pink bunny slippers from his aunt. In the movie, he gets that whole pink bunny getup, and we get to see him try it on and be super unenthusiastic. In the book, the visit with Santa is similar, but it’s missing Santa’s boot to Ralphie’s face.

A lot of what's great in the book is pumped up just a tad for the movie, and inflation was the right move.

The stories started on the radio, were committed to print, and maybe the third time really was the charm. If you ask me, the movie is the best version of the material.

Who Should Read It?

It’s still worth your time to read In God We Trust: All Others Pay Cash, provided you really like A Christmas Story. I know it sounds weird, but I’d skip the A Christmas Story material and read everything else. There’s some funny stuff in there, like the tale where Ralphie thinks he’s doing his buddy a favor by double-dating, but then realizes HE’S the dud, and it’s everyone else on the date doing HIM a favor.

If you love the movie to death, I think you’ll find a lot to enjoy in In God We Trust: All Others Pay Cash. If you’re into humorous recollections of a 1950's Midwestern childhood that occasionally veer into “walked to school uphill both ways in the snow” territory, you’ll dig it.

Oh, and I’d definitely recommend reading the books over seeing the semi-sequel, My Summer Story aka It Runs In The Family. Even an appearance by the great Glen Shadix (Otho from Beetlejuice, people!) couldn’t save that one.