Voices of the Dead: In Memories and Literary Prose 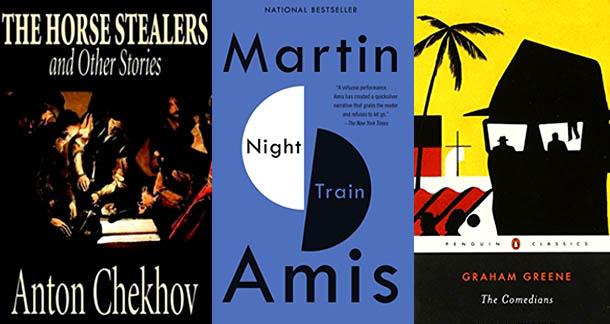 When the family reserve has been let down by the indie publishing, I go back to the daily security grind which takes me here and there, until the coffers are no longer on life support. So, there I was, at 4:30 a.m., shuffling into the Holiday Inn dining nook in Warrenton, Virginia—preparing my bolstering dose of English breakfast tea—when I noticed the woman I had exchanged pleasantries with the previous morning was unhinged. "Be careful out there," she warned. "There's been a murder at the CVS and the police told us to lock the doors. So, if you go out, you’ll have to knock or call to get back in." That deposited an image of me pounding on the glass of the sliding doors like a tasty human morsel pointlessly attempting to escape George A. Romero zombies. I thanked her for the admonition, and luckily, no killers, real or of the flesh-eating variety, were lying in wait as I left for work.

A mist is rising slowly from the fields and casting an opaque veil over everything within eyesight. Lighted up by the moon, the mist gives the impression at one moment of a calm, boundless sea, at the next of an immense white wall. The air is damp and chilly. Morning is still far off. A step from the bye-road which runs along the edge of the forest a little fire is gleaming. A dead body, covered from head to foot with new white linen, is lying under a young oak-tree.

Once you've been up close with the dead, you understand they are 'screaming' to be heard, to be remembered, and to not give any significance to their voice is its own kind of crime...

Anton Chekhov's incomparable style from "A Dead Body" (1885) comes back to me when considering how nature courses on, oblivious to our activities. The rolling sea waves. The moist, murky air. And, oh, the corpse right over there underneath that mighty Quercus. There was no such elegance for the victim at the national-chain drug store. The man’s body was left unceremoniously behind the dumpster. But it’s of little consequence to nature—a force that will reclaim what energy it can suck out and then envelop the rest. The ease at which Chekhov maneuvers from the beauty of life to the final dark void is mollifying when compared to the harsher reality of everyday existence.

On the drive to work, memories surged, retrieving the first homicide that hit close to home: back in the 1980s, our neighbor, Hugh Chaffin, was bound, gagged, and tossed down a flight of stairs into his root cellar. Police officers came to our door, asking if we had heard anything. Our family had been watching a rerun (amazing after all these years I remember that trifling point) of The A-Team, and with all the machine gun rat-a-tat-tat, we hadn't. We did remember inviting the kindly Mr. Chaffin over for Thanksgiving dinner the year before and that was that. The horrific crime remains unsolved to this day.

My innocence at that age was dragooned from a haven of equanimity after hearing of Mr. Chaffin’s unfortunate end, and when juxtaposed with the cartoonish carnage of Hannibal Smith's squad I forevermore viewed violence through a prism of starker shades. My lens now focused to life's bluntness, The Hardy Boys gave way to Robert B. Parker and then more adult crime fiction which had to contain a standard of realism that I had become aware of. Reading crime and mystery stories, I was now struck by whether an author had given any weight to the unluckiest of characters (i.e., the corpse), or if it was just a passing prop … disposable matter.

Martin Amis's Jennifer in Night Train (1997) parallels the astringency of my next encounter with death, which was much more obtrusive, unlike Mr. Chaffin's case where I hadn't seen the body. I was in Haiti from late ’94 to early ’95, deployed for President Clinton's police action Uphold Democracy, when my unit came upon a corpse on a dirt street in Port-au-Prince. A man murdered, shot in the head, bits of bone and brain flecked among the pebbles and drained blood that had seeped into the gravelly ground, rigor setting in. A distraught woman crying frenetically along the roadside was being comforted when an insensitive, self-centered soldier had his picture taken next to the body in a Hemingway big-game trophy pose. Our translator, Steve, informed me the woman was the man's mother. I can only imagine the feelings of anguish over her murdered son mixed with animosity for the inconsiderate lout of a soldier.

I had brought with me on that mission a paperback copy of Graham Greene's The Comedians (1966), and while not exactly comparable to my experience, Greene’s depiction of the Haitian milieu had set a familiarity that reinforced death is all around in various incarnations.

Doctor Philipot must have walked up to the narrow cave of shadow made by the diving-plank, and now he lay in a crouched position below it with his knees drawn towards his chin, a middle-aged foetus ready dressed for burial in his neat grey suit. He had cut his wrists first and then his throat to make sure. Above the head was the dark circle of the pipe. We had only to turn on the water to wash the blood away; he had been as considerate as possible.

In the education of this pulp writer, once you've been up close with the dead, you understand they are 'screaming' to be heard, to be remembered, and to not give any significance to their voice is its own kind of crime. Chekhov, Amis, and Greene understood this fact. A line like "The chemistry of death is busy with her" became hardwired on my first read. Just like the experience of seeing a fellow human splayed on a Haitian street; it’s been twenty years and yet the image remains front and center—vivid, vital—as it should.

Interesting piece. Most of the dead that I've seen have been family members. I've had friends and acquaintences mugged or beaten, but not murdered. I suppose such experiences for me have led more to my interest in horror fiction and poetry than mystery or noir.