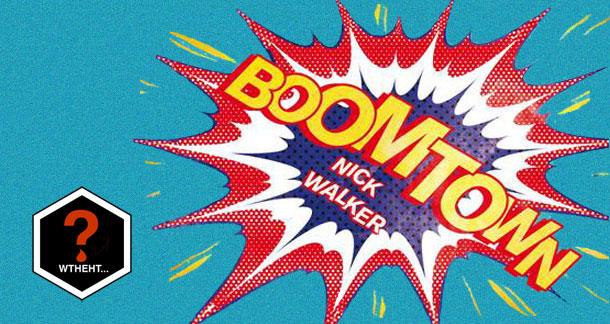 Trafalgar distributor IPG has responded to my inquiry. The news is doubleplusungood:

Unfortunately, due to the recent developments you mentioned, we are unable to supply forthcoming titles from Beautiful Books.

In the specific instance of Boomtown, it appears that Beautiful Books had only purchased UK & Commonwealth rights, not rights to distribute into the U.S., so this title was never submitted to us. Please follow this link for more information on that title.

Well that sucks. I blame you, the LitReactor readers. I was disappointed in the lack of excitement over Boomtown, considering I know quite a few of you loved Blackbox. For shame.

Seriously, though- here's to (selfishly) hoping the book finds a new home soon.

Way back in twenty-aught-cinco, a fellow Cult member introduced me to a little book called Blackbox: A Novel in 840 chapters. Box tells the story of a mysterious airline stowaway and the 20 lives connected to her's, tangentially or otherwise. It's like an Altman film, or Paul Thomas Anderson's Magnolia, with an airtight plot pressurized to prevent hypoxia and a pace like a dead fall. It's six degrees of separation on a grand scale, and keeps you guessing all the way until chapter one.

As soon as I finished reading, I turned back to the beginning and started again. I wanted to be sure I got every detail. That's the type of book we're dealing with. If you haven't read it, I recommend you hoof it down to your local brick and mortar and pick up a copy. If you live the sedentary life, speed type- don't hunt and peck- over to your favorite online retailer and toss it in your cart.

If you're a Legacy achiever you're probably already in the know, because Blackbox has something of a cult Cult following. In fact, it was so popular over there that author Nick Walker was drafted to teach one of their online classes. Unfortunately, all remnants of said class were lost in The Great Drupal Transfer of the Aughts, and is one of posterity's biggest tragedies.

By this time I had mentally masticated both Blackbox and it's follow-up, Helloland, and was hungry for more. Lack of a third novel sent me into Prader–Willi-like fits of rage. So I went directly to the source, as I am wont to do, and shot Nick an email. This was probably around '07. He told me that he had written a new book, but didn't know when it would be out, so I played the waiting game. I let a year go by and followed up again. I never heard back. This was the beginning of a long period of despair...

So when LitReactor started up, I decided to reach out to Nick again, much like I did with Jeff Noon. This time, the news I procured was good news. Nick told me he had taken a break from the world of books (as he is also a member of transformative art collective Talking Birds), but had a new novel coming out in March 2012 called Boomtown. Could this be what the Mayans were predicting? Either way, it definitely warranted a few exclamation points (!!!). Here's a synopsis:

Boomtown is the third novel from Whitbread-, British Book Awards- and Perrier-nominated writer Nick Walker. It is about the life of a city which lives under the shadow of a volcano, and the tensions and trauma that thereby affect its citizens. Half of Boomtown lives in a state of readiness, half of it lives in a state of recklessness, but when the sirens start to wail one Christmas Eve, it becomes clear that it's the reckless ones that have been in charge all this time, and the city's preparations for a natural disaster leave the population doomed. 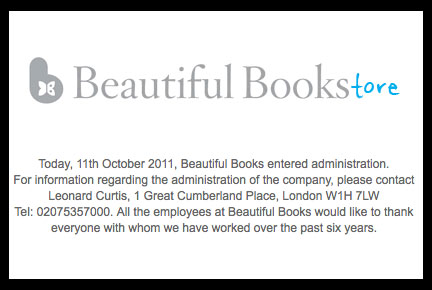 Alas, my ecstatic use of punctuation was premature. About a month later, Nick informed me that UK publisher Beautiful Books had gone under and he was trying to find Boomtown another home. An eJaunt to BB's website confirmed the worst. I guess this is what happens when good news does bad things.

But never fear, my emotionally sensitive bibliophiles, there is yet still hope; a faint glimmer of light exists at the end of this tunnel of industry sewage. Publishers Weekly is reporting that Trafalgar Square Publishing out of Chicago has signed six UK houses and will start distributing their titles as of January. One of those houses just so happens to be Beautiful. Does this mean there's a chance we might still see Boomtown next year? The article is unclear as to whether this deal applies only to back catalog or includes titles already in the pipeline. The acquisition was news to Nick, and he assured me he would be looking into it. You might want to help out by politely pestering Trafalgar with requests. This book has been a long time publishing.

Bought Blackbox because of this article.

I felt the same way about Gillian Flynn's Sharp Objects and Dark Places. Imagine my dismay when, after devouring the second novel in a ravenous fit, I read that she has no plans for a future novel.

Joshua Chaplinsky from New York is reading a lot more during the quarantine November 16, 2011 - 3:05pm

Awesome. Come back and let me know what you think.

I read Blackbox and Helloland years ago and thought they were fabulous, I would be thrilled to see another Nick Walker book out sometime soon!