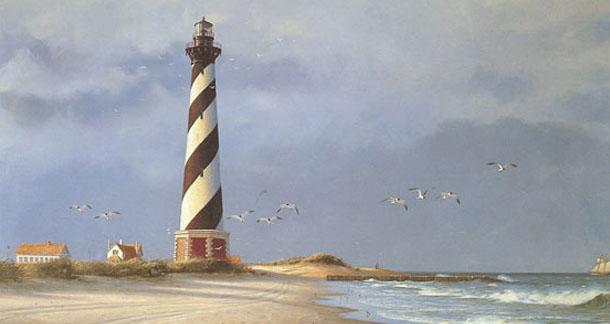 Theme is tricky business. A story has to be about something, but if you litter the page with obvious thematic cues your writing could come across as didactic and heavy-handed. Getting those big, universal ideas across without “pointing” the reader toward them, or otherwise producing something that reads like an instruction manual, takes a lot of finesse. It’s easier said than done.

One way to dodge this quandary is with the use of an objective correlative. Simply put, an objective correlative is an object in the story that serves a symbolic purpose. It’s an everyday item that possesses some thematic presence, or conjures an image, or jukes an emotional response from the reader, implying a meaning larger than what is actually there.

Objective correlatives are exercises in economy, but more importantly, they allow writers to communicate universal concepts tastefully and subtlety.

You can find objective correlatives everywhere in books and movies. It’s the lighthouse in Virginia Woolf’s To The Lighthouse, it’s the coffin in William Faulkner’s As I Lay Dying, it’s “the hole” in Ralph Ellison’s Invisible Man. The objective correlative doesn’t have to be an inanimate object; sometimes they manifest themselves in the form of an event. It’s the worldwide loss of vision in José Saramago’s Blindness, or the “airborne toxic event” in Don DeLillo’s White Noise.  Sometimes the objective correlative is a character: the car in Stephen King’s Christine, or Boo Radley in To Kill A Mockingbird, for instance.

The objective correlative is a quintessentially Modernist device. While he didn’t invent the term, T. S. Eliot was an early champion of the concept, and it appeared frequently in his work. In his essay “Hamlet and his Problems,” Eliot said “The only way of expressing emotion in the form of art is by finding an ‘objective correlative’; in other words, a set of objects, a situation, a chain of events which shall be the formula of that particular emotion; such that when the external facts, which must terminate in sensory experience, are given, the emotion is immediately evoked.”

Translation: the idea is to turn an object, event or character in the story into a translating mechanism that poses some greater question that’s not directly on the page. The qualities or questions these objects evoke aren’t intrinsic to their make or design; they’re deliberately put there by the author, infused by circumstance, description and typically lots of repetition. By repeatedly invoking objects that correspond with the circumstance of the story, the reader is eventually brought to accept their being as something greater than the sum of their parts, and their presence serves as a sort of bridge that brings the reader to accept a larger, thematic meaning in the work.

There are other benefits in using objective correlatives. For one, it’s great way to abide by the writer’s “show, don’t tell” axiom, which essentially means stories should reveal details through dialogue, scene, and action instead of a laundry list of descriptive details. “Showing” is to present details by having your characters or plot exemplify them, instead of simply “telling” us those details outright. Objective correlatives do this naturally: they repeatedly offer an article that relates to the circumstances of the story, and the reader puts its meaning together on his/her own. No instruction required.

It also gives your story a lot of organizational power. I started putting objective correlatives in my work before I even knew what they were, simply because they allowed me to tell a story quickly and with as little expositional mess as possible. Example: I once wrote a story about a farm boy whose older brother was killed in a grain silo accident on his family’s property. A year later, the family wants to dig up the remaining scraps of the silo and pave over it, so that eventually it will appear as if nothing was there, that nothing happened. This enrages the boy, and it soon becomes obvious that this silo is no longer an ordinary object used for storing grain. It’s a cistern, an article of emotional transference,  for a coming-of-age character’s fledgling feelings regarding love, regarding family, regarding death. Yet thanks to that silo, I never had to say any of those things directly.

Readers aren’t dumb. They want to be enlightened by a piece of writing, but resent it when authors go out of their way to instruct them on the intended terms or design of that enlightenment. Objective correlatives are exercises in economy, but more importantly, they allow writers to communicate universal concepts tastefully and subtlety. Repetition is one of the strongest tools a writer has. It doesn’t matter how banal the article is, if the same event or object begins reappearing in the work — especially during the “big” scenes — readers will intuitively grasp its significance, and will know there’s a deliberate pattern being staged by the writer for the purpose of achieving some greater thematic effect. So, instead of talking so much about what your story is about, try putting those transfering objects on the page, and let the feelings they evoke do the work for you.

This is a great way to think about using symbols -- a more specific, targeted way. Great article, good to keep in mind.

a very good post for readers like myself, it does not only inform but it also enhances one's knowledge about a certain topic. Thanks! http://instalikes.org

The topic you presented is very interesting to read  and easy toundertsand too , also its a good reference to keep. You clearly stated the thoughts in your content. It's impressive that you are getting thoughts from this piece of writing aswell is from our discussion made this time. Keep it going! write your own soundcloud comments