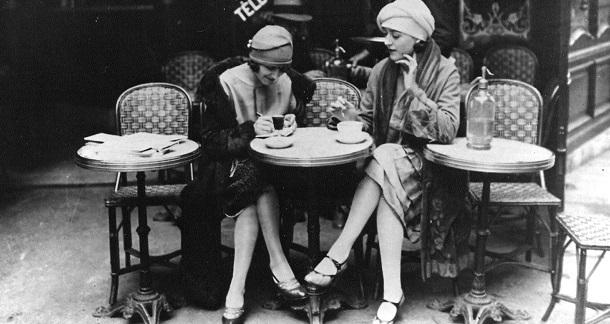 Human speech can change extremely quickly. Words that were trending last year are now passé, and terms from ten years ago can seem ancient. When done correctly, historical dialogue can be used as a tool to add polish and an air of authenticity. Done incorrectly, it can completely eject a reader from the story.

Is historically accurate dialogue ever strictly necessary? That seems unlikely, at least when administered in large doses. If you laboriously researched the historical context of every word, you’d have a finished novel in about three decades. It’s probably best to follow the same strategies when writing historical fiction that help create realistic modern dialogue.

That said, however, subtle use of vintage terminology— slipped casually into a rendezvous in a Versailles garden or at a booth in a dark speakeasy— can serve as another piece of the backdrop. One title that comes to mind for really nailing this is The Shark Curtain by Chris Schofield, whose meticulous attention to period detail made the "when" of the story seem at least as important as the "where" in developing the setting. Within a few chapters, the decade of the sixties was beginning to seem like its own wholly formed character.

For example: my grandfather liked to call everyone “toots,” which the Online Etymology Dictionary dates to 1936. There are other details I could pull from my memories of him while trying to write a description; his exaggerated tales of the Korean War, his collection of golf clubs, his slick white hair, red nose and the kitchen of his farmhouse in New Hampshire smelling of cigarette smoke and mowed grass. But his “hey, toots” perfectly places him in the context of time. It was a reflection not just of my grandfather’s personality, but of the world he lived in.

Here are a few sources to get you started. Besides, we both know that researching weird old slang terms will give you an excellent excuse to procrastinate instead of writing the actual novel:

It’s important to remember that the past isn’t all zozzled flappers and backseat bingo. Outdated slang and can also be highly controversial. In a PBS discussion on reading Huckleberry Finn in today’s classrooms, writer David Bradley offered these words of wisdom: “We cannot avoid being hurt. Language hurts people, reality hurts people...People sometimes think the book causes things. It only causes things if there are things there that are waiting to happen.”

The right to offend or not belongs with the writer, of course, but words are powerful. Take care to understand the roots of the words that you choose. If you do decide to include a controversial term, it might be wise to take some time to carefully analyze your reasons for the decision.

The Use of Derogatory Language in Period Pieces

Speaking of old movies, I was watching BRIDE OF FRANKENSTEIN('35) with subtitles and what I heard as Dr. Frankenstein (Colin Clive) saying "don't" was actually "daren't," a contraction of "dare not." I dare say that I don't think even RP English speakers say "daren't," anymore. Problem is, I wouldn't advise using it as authentic period dialogue, as it would confuse the reader and stop the story cold.

Thanks for the example, Dave. It makes me want to go give Bride of Frankenstein a watch. I agree that deciding whether to include archaic language definitely calls for case by case analysis.