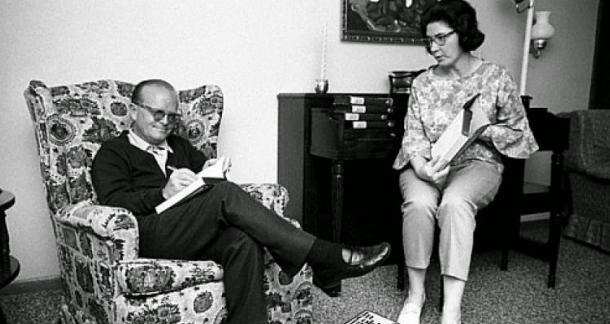 Excuse me if I sound a little irritated today, but I should explain that here in the corner of Heaven reserved for Famous Dead Authors, the organizing committee, chaired this year by that meddling busybody Agatha Christie, recently changed the system for choosing our overall Paradise experience. For some time Norman Mailer and I had charmed and bribed enough votes from our fellow-authors to ensure that the Hereafter permanently took the form of Studio 54 in its 1970s heyday. Under the new rules we have a rota, and for the next few Celestial Cycles WH Auden and his crony Yeats have decreed the FDA slice of Heaven has to clean up its act. In practice what this means is that bourbon and speedballs are off the menu and instead we all must sit around in what looks like a Greek temple wearing togas and sipping tea while Auden reads his latest verse and Scarlatti plays on the Eternal stereo.

But I’m wandering from my subject, which is the publication of Go Set a Watchman by my dear old friend Nelle and the hoohah which has resulted from this.

Atticus can’t stomach a world where black people are learning to help themselves.

Now I’m not against buying a book for bad reasons. Plenty of people bought In Cold Blood because they were curious and hoped to be scandalized and titillated. They wanted the details of a terrible murder and they wanted them written well and that’s what I gave them. Plenty of people bought Nelle’s first book To Kill a Mockingbird ,also out of curiosity, because they had heard of it, but plenty more bought it because they wanted to be improved and enlightened and you could say that they got that too. We all loved the story of brave Atticus Finch and his feisty little daughter Scout. We loved the way that Atticus had principles and fought for what was right. We loved the way Scout learned those principles from her father and we loved how the moralizing and general sentimentality was mixed up with homey tales about growing up in the South, as though the South was a place where you couldn’t turn around for tripping over a chitlin or a waterhole or a plate of grits.

To Kill a Mockingbird has become a catch all primer for our notion of how justice ought to be. Generations of Americans have sat in class and read it. Generations of teachers have taught it. Generations of theatre camps have performed it in the summer. The internet is lousy with study guides and analyses and theories about the plot. Some people think I wrote it, but I didn’t. Seriously, if I had, do you really think an attention hound like me would have let Nelle take all the credit? The reason she swore she’d never publish again has nothing to do with needing me as a coauthor. It’s because she knew how the story had to end. And she knew the world wouldn’t like it.

The white world that is. For all it’s revered and taught in schools, To Kill a Mockingbird can’t lay claim to giving us anything but a very white view of the world. A Driving Miss Daisy view of the world. A saintly-white-folks-save-the-black-folks view of the world. I always wondered how it would be to be a black child sitting in that schoolroom and reading that book, reading about how the white lawyer put his family’s safety on the line by trying to save one of my people. Oh I know that not all the white folks in To Kill a Mockingbird are saintly, but wouldn’t some of those black kids long to read a classic of literature where the saintly black person gets to save the white person, just for a change?

I wonder if Nelle felt that too. We can’t discuss her reasons for finally deciding to publish Go Set a Watchman, seeing as I’m dead, but I can’t help feeling that part of the motivation might have come from an impish need to knock the idol you’ve all made of Atticus Finch off his pedestal. There’s more than a bit of Nelle in Jean Louise Finch, who is the kind of girl who’d laugh fit to bust at the very idea of hero worship. I wonder if Go Set a Watchman, with Atticus Finch turned racist old man, is her way of moving on from the simplistic black and white ethics of childhood and into something more adult and more complicated. Atticus can’t stomach a world where black people are learning to help themselves. He can’t tolerate the thought of ‘backwards’ people wresting the right to vote from the hands of the educated. He can’t accept the prospect of decent white schools ‘dragged down to accommodate Negro children’, the same schools, one supposes, where children learn their sense of morality from To Kill a Mockingbird.

Education in American will never be the same again. Teachers can no longer stick that book under the noses of their charges and hold up Atticus Finch, white lawyer, as the epitome of goodness, because you can bet your bottom dollar that some bright spark in the back row of the class will have heard of Go Set a Watchman and will be all too willing to ask teacher about What Happened Next. Teacher will have to explain that maybe Atticus’s love of justice does not extend to a love of all people, no matter what their color, and that we were mistaken about his motives all along. Teacher might then notice for the first time that Atticus has a black maid to keep house for him and that his conception of the relationship between white person and black person might not be so very far removed from that of master and servant.

Times change. Read the headlines today and you can see that people still struggle with the idea of black people as real people, deserving of the same courtesy and respect as white people. To Kill a Mockingbird doesn’t seem to have driven much change, for all it has a place on every schoolhouse shelf. Perhaps Nelle feels that all her book does is reassure we whites that we’re not so bad after all, that when we’re called to step up for black people we will. The truth is very different. Perhaps she feels it’s time we acknowledged that.

‘I’ve killed you Scout. I had to’ says Atticus to his daughter in the closing pages of Go Set a Watchman, but really the killer is Nelle herself and there are two victims here: Scout and her father. With those two dead, it’s time to move on, she’s telling us. She’s right. It’s time we did.

Now you’ll have to excuse me again. My toga has slipped and I need to refasten the dang thing. After that, Mailer has promised to start an argument with Virginia Woolf over pronouns and I plan to use the distraction to slip a spider into Auden’s cup of Earl Grey.