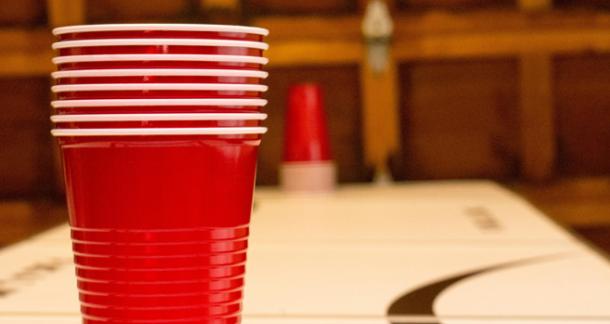 A column reviving car trip games with a literary twist. Bust out your map app, it's time to go on a trip.

Ah, summer. The time for flip-flops, Speedos, and cocktails on the beach. And drive-in movie theaters. Wait, did we just take our DeLorean back to the '50s? We wish. But warm summer nights make open-air film-gazing possible, whether it's in your local downtown square, on a white screen in the park, or at a full-on drive-in theater. And open-air means open containers, so grab your pregnant friend or other designated driver, throw open the tailgate, and imbibe along with the drinking games we've crafted for eight book-based films playing on screens across the country this summer.

Best pairs with: A hidden flask of gin (Fitz's drink of choice)

Fitz was quite the talented boozehound, and his best-known tome is considered by many to be the Great American Novel of the twentieth century. This summer, Baz puts his acid-trip spin on the iconic prohibition-era story of dashed dreams, wicked wealth, and hidden hopes. Fill your flask and bask in the 1920s eye candy.

Drink: This one's simple. Drink whenever the characters drink. You'll be sloshed by Act II.

Chug: When you feel a Baz-induced seizure coming on.

Much Ado About Nothing by William Shakespeare, directed by Joss Whedon

Best pairs with: A goblet of wine (Duh! It's Shakespeare, right?)

All-star Whedon, responsible for hits like Buffy the Vampire Slayer and The Avengers, takes a stab at the Bard in this black-and-white comedy filmed in Whedon's own home during a brief "vacation" from his other projects. Enjoy this one with your best crystal in a classic convertible.

Drink: Whenever someone fights with someone else. Or with him- or herself. We're not picky.

Chug: When you find yourself watching Fred and Wes from Angel.

Best pairs with: An Eye of the Tiger (because you'll need three rums to deal with the Debbie Downerness of this flick)

Blume is an icon of many a woman's adolescent years, yet this is the first of her nearly 30 novels to be translated to film. She often deals with social mores, and Tiger Eyes is no exception. Mix up a rummy Eye of the Tiger and...enjoy?...a harrowing visit to the eye-opening, dream-crushing days of your childhood. Best appreciated from the cramped backseat of your sister's jalopy.

Chug: When you wish you had your baby blankie to cuddle.

Best pairs with: Long Island iced tea or Sweet Tea vodka (that's the closest we can get to English Breakfast)

Mr. Darcy is the perfect man. Especially if you crave the pre-feminism, patriarchal days of Austen's England. Hale's book transports modern-day women to a farcical Austenland, where the ladies wear bonnets and the men still rule the roost. Spike your tea and sip from a china cup in your best horse-drawn carriage. Or your side-saddle bicycle. Whichever you prefer.

Chug: When you feel Austen's signature brand of feminism slipping slowly away.

The Mortal Instruments: City of Bones by Cassandra Clare, directed by Harald Zwart

Best pairs with: Beer served in a Mortal Cup (isn't that how the teenyboppers do it?)

Every teen's dream is to hunt demons on the side, right? Relive your not-so-glory days the way they should've been in this adaptation of the first book in Clare's hit young adult series of Shadowhunters and other supernatural beings. There's even a Twilight-esque paranormal love triangle to complete the guilty pleasure experience. Enjoy on a crowded tailgate with Natty Light in a Mortal Cup, and who knows? Maybe you'll get to be a Shadowhunter too.

Drink: You're on cheap lite beer, so you'll need a lot for this one. Just drink anytime you see 20-somethings pretending to be teens. That'll do it.

Chug: During fights with supes. That should keep you pretty busy.

Best pairs with: Spiked nectar of the gods (or hunch punch, for we mortals)

Another YA fantasy, only with more Greek gods and less love triangleness. This one's best served in a golden chariot with the film playing against a backdrop of clouds. But if your chariot's out on loan, a blanket-lined field with the film playing on the wall of the local mom-and-pop will do, too. You can always pretend you're flying.

Drink: Each time magic is used.

Chug: When the seas part. Let the liquid inspire you.

Best pairs with: A Zombie (do I really need to explain why?)

Haven't gotten off the zombie bandwagon yet? Then you'll enjoy this action-packed zapocalypse thriller. And let's face it—Brad's a beaut, even (maybe especially) when he's trying not to be, so even the ladies will enjoy this one. Toss back your cocktail in neat little mouthfuls from the turret of your tank.

Chug: When you realize you'd rather be reading the book.

Iron Man 3 based on comics created by Stan Lee, directed by Shane Black

Best pairs with: Anything (because Tony Stark likes it all!)

You didn't think we'd forget the comics, did you? Comics are books too! Just brighter and with less words. And Iron Man is a king of comics in the film world. Robert Downey Jr. is always stellar as Tony Stark, no matter the villain. Enjoy his turn in the third installment with your favorite drink in the hand of the arm around your own Pepper Potts.

Drink: Because Tony, the Comicverse's favorite alkie, is too busy to drink much in this one, so you'll have to do it for him. The whole movie. For any reason. You're welcome.

Chug: Whenever you damn well please. Downey Jr. and Stark would both approve.

Being in Apollo Cinema I enjoyed every second of my life because of the service they provide. I visit https://youressayreviews.com/is-edubirdie-legit/ website to know is edubirdie legit for me to use for academic purpose. They have comfortable seats and timing of the different shows is also pretty comforting. I cannot wait to visit that heavenly place again with my friends.