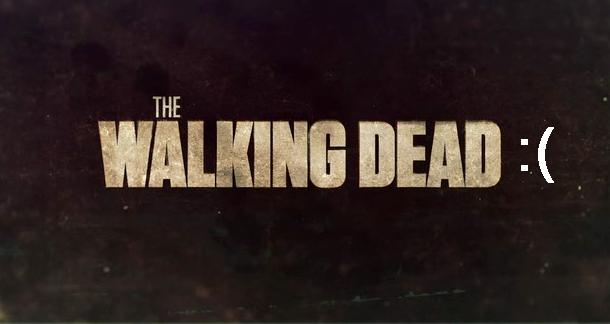 Every week I watch The Walking Dead and I hope it turns into a good television show.

Sadly, it does not.

The first two episodes of the first season were great. Since then it's gone down a very steep hill. There's a myriad of problems, but I think they all come back to the writing. This is a poorly written show, with meandering plots, contrived speeches, and obnoxious characters. There are a few shining moments, which is probably why I keep coming back, but I'm very close to giving up on it when the season starts again in February.

And I want this show to be good. I really do. This is the golden age of television. Breaking Bad, Community, Mad Men, Doctor Who. There is so much awesome stuff to watch on TV. And yea, I want a cool zombie show too. But this is not a cool zombie show. This is a mess. And I'm not saying it needs to follow the comics, which are also meandering and plagued by long stretches of boring. It just needs some good writing so that I don't hate every character except Daryl.

After Sunday night's mid-season finale, the show is on break for two months. I don't know how much of the second half of this season has been shot, or whether the show will continue to suffer from AMC's rough handling of the budget and showrunner. But as a television viewer and a fan of all things related to zombies, I do have some suggestions on how to make this show more engaging when it comes back in February:

10. Stop with all the monologues and serious talks.

At least four times per episode, everything grinds to a halt so a character can tell a story, or relay some information, or give an impassioned speech (I'm looking at you Rick, and everything you've ever said). I get that a zombie apocalypse is a vehicle for telling human stories, but there needs to be less 'telling' and more 'things actually happening'.

The women on this show are sexist caricatures. Carol does nothing buy cry. Maggy acts crazy around Glenn, because girls who like boys are crazy. Andrea is angry all the time, not for any real reason, but so there can be tension in lieu of character development--and so she could "come out of her shell" by shooting guns and fucking Shane. This show's attitude toward women was summed up when Glenn asked Dale if all the women were on their periods. Get it? Because ladies on their periods are nuts! You know why Mad Men has good, interesting female characters? Because the writing staff is predominantly female.

I know I addressed the problems with the female characters, but this deserves special mention: Lori is reprehensible. Everything she says is mean or terrible. "I hate my husband because I got angry at him for nothing and he responded by being understanding and compassionate." CHRIST! Unless the goal of this character is to set back gender equality, please give Lori something nice to say, for once. 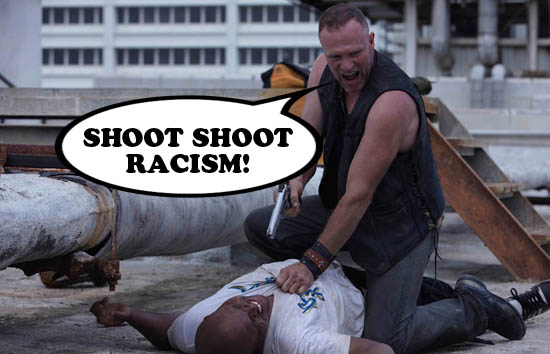 7. Give T-Dog something to do other than be black.

All T-Dog does is stand in the background and sometimes say something. He's there for the sake of diversity. That's it. Writers, please give T-Dog something to do. Please justify the existence of this character outside of filling a racial quota. IronE Singleton deserves better than that. Also, give him a name that's less racist than 'T-Dog'.

(This item comes with a SPOILER ALERT). I refuse to believe that not a single person on the farm knew Sophia was in the barn. Comic series creator Robert Kirkman has said that Otis had been putting the zombies in the barn and then Otis got killed, so that's why nobody knew. I call bullshit on that. They were feeding the zombies. Nobody noticed the little girl? That's weak. And the timeline doesn't make a great deal of sense. There may be a very good, logical explanation for all of this. We need to hear it. Because otherwise the writers are showing contempt for the audience by pole-vaulting logic in favor of an emotional payoff.

5. Stop making characters do stupid, illogical things in every episode.

The whole "zombie down the well" thing was pretty funny, but stands as television's worst example of problem solving, ever. The second they lowered Glenn into the well, it was obvious what would happen, therefore robbing the moment of any tension. And really, the only way their plan could have been worse is if they stood in a circle hitting each other with hammers. When you put characters in a completely illogical situation to give the illusion that something is happening, that's lazy writing.

4. Kill all the survivors; replace them with new ones.

Keep Daryl and Glenn and Shane. That's it. I'm really tired of the rest of them. They're all so annoying and I hate their faces. But failing that...

Of the survivors, and the farm, and the writing staff, and everything ever, from this point forward.

Soon. Daryl is great, but he can only carry the show for so long. Michonne, a sword-wielding character from The Walking Dead comic book, is a strong black woman--something this show desperately needs (see points 7, 8 and 9).

1. Try to include some zombies.

It is very easy to forget this is a show about zombies, and not about people whining on a farm. So far in this season, there has been one legitimately scary zombie moment--on the highway in the first episode. Other than that, how many other cool zombie moments have we had? Besides Well Zombie and High School Zombie Attack, I can't come up with anything. These zombies aren't a threat. They're just sort of there and they happen and they're gone. Again, zombies are a vehicle for telling a story. They are the ultimate MacGuffin. But they still need to be there if the show is about them.

It's nice to read this after having just finished watching the fifth season knowing I wasn't alone in my disdain for the first 1.5 seasons. Rob, you really nailed all the main points. This is exactly why I hate the first season and the first half of the second season. You could always tell I was watching the Walking Dead by all the angry groans coming from the coach. Not unlike a zombie I suppose.

But I was always so shocked at how many people were absolutely in-love with the show out of the gate. At the studio I worked at at the time, I would vent my frustrations with the show to a corwdful of butt-hurt looking zombie lovers. It is irritating the number of zombie-zombies there are -- people who blindly glom onto anything, regardless of quality, so long as it has a reasonable amount of undead dismemberment.

But I am happy to say that the moment Shane unloaded on all those zombies in the barn, that was the first sane thing I had seen anybody do up until that point. So he was cool. And Rick stopped being such a pussy and wasted him. Which was when he started to be cool.

And since then I'd say it's been pretty damn good. Hell, the first episode of season 5 was brilliant. And just when you're starting to think it's treading a path down Boring-Herschel-farm Lane, they twist it back on track. And the racial diversity doesn't seem forced. Imagine that! Georgia has black people that aren't cariacatures... Bravo!

Also, nice call on Michonne. You were right on the money there!

As you said the writing is terrible.I don t know anything about the comics.but here s the mother of all fuckups issue I have with this show:PEOPLE FIGHTING PEOPLE!!!!!!! In a post zombie apocalipse world gone to shit no human would fight another human.all differences and squabbles go out the door in a heartbeat.I don t care if you re ted bundy a neo nazi scum or a wall street shark.anything with a pulse and trigger fingers\hands Is by default your ally best friend and personal jesus christ.and it's a world where life Is fragile.you can die anytime.there shouldn t be an excesive number of starring characters. The weak die the strong thrive.that s it. a show that s suppose to be fast paced brutal and leave you on the edge of your seat everytime an episode ends.not this let s move here gros veggies talk about our feelings hallmark horseshit

So a black guy nicknamed is racist because it is a common black man name. Does not make any sence. So your logic basically is you did not make this character have a non steriotipical black man name therefore it is racist. Do not see you bitching about any other name. Maybe the one assuming all black character s are named t dog are just written by racist writers is you. You are a terrible progressive hack.Also this show needs more female writers to have stronger female characters? Look at the sexist here. The series is based on a book and the story and characters develop. Most woman are less prone to violence than men. So of course they are gonna take a long time to become accostumed to the new need for violence. Statistic back this up. Your thing is basically let us put this set sex or race in the show more and somehow they are the racist. You suck honestly. What a racist and a bigot you are.

Complains about a black man having a common nickname and therefore being racist,does not complain about some redneck being racist in the show. Seems steryotypes only annoy you when they hit groups you believe need your protection. You are a terrible bigot i hope they fire you. You suck.