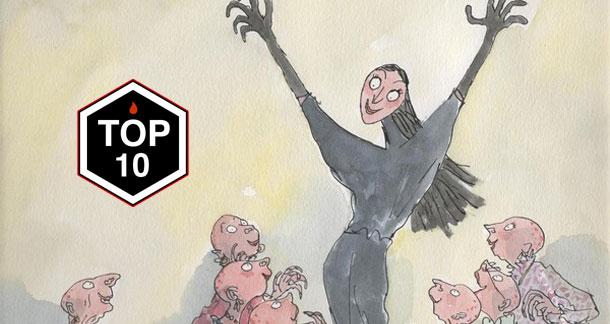 The thing about kids? They're much more resilient than we think. Adults that fret over fiction that is too frightening for young children are neglecting one irrefutable truth: kids like to be scared. They're made of pretty strong stuff, and they enjoy the kind of cozy, insulated adrenaline rush that comes in the form of a scary book or movie, ghost stories or Halloween. When I was young, I used to actually lie in bed and try to scare myself ("That shadow...is a witch! And she's going to eat you, Meredith!") just to get my heart racing before I dropped off to sleep at night. Sure, kids will get nightmares, but they'll get over them just as quickly.

Adults are the ones who can't stand to be scared. Grown-ups like to be in control; we like to play it cool. Below are ten books that kids eat up that could creep out the most stoic adult. 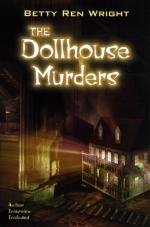 Twelve-year-old Amy discovers an antique dollhouse in the attic, an exact miniature replica of her aunt's spooky old house. At night, the dolls appear to move on their own, recreating a gruesome crime that once took place in the house: the murder of Amy's great-grandparents. The adults blame Amy's mentally disabled sister Louann, but Amy believes the dolls are moving of their own free will, trying to tell her something about that long unresolved crime.

It's devastating to contemplate the unresolved murder of loved ones, and Aunt Clare long suspected that her late fiance was to blame for her grandparents' deaths. It would be heartbreaking to believe your long-dead husband-to-be murdered your family. Plus, dollhouses are creepy, and dolls moving on their own at night, recreating the scene of a tragic murder over and over? Major wiggins-giving. I get unnerved when I can't find my keys where I last left them. 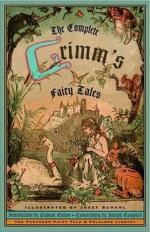 A collection of stories by those macabre bros, including such classics as "Rapunzel," "Hansel and Gretel," "Cinderella," "Little Snow White," "Little Briar Rose" and other stories co-opted and cleaned up by Walt Disney.

Although Disney films have turned the concept of fairy tales into innocuous love stories filled with singing birds and happy endings, the Grimm Brothers were all about bleak moral lessons and cruel punishments for the wicked. It's somewhat disturbing to consider that these stories in which children are eaten, princesses are comatose, and hearts are devoured were written for kids. 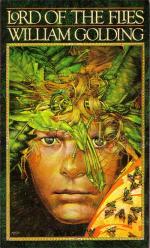 3. 'Lord of the Flies' by William Golding

A plane carrying a group of schoolboys wrecks on an island during a nuclear war evacuation. At first they behave in a civilized manner guided by the peaceable Ralph, but as one loud dissenter named Jack begins to assert his daunting influence on the group, social niceties break down and havoc ensues.

An island run by wild, dirty boys? Terrifying. Look at what happens when we leave boys to their own devices: ritual sacrifices, severed pigs heads, kids flattened by boulders. This is why we can't have nice things, boys! 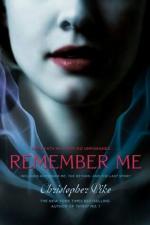 4) 'Remember Me' by Christopher Pike

Shari Cooper goes to a party, stands on a balcony, and wakes up dead. The police are saying she committed suicide, but she knows she didn't. And she's not going anywhere until she solves her murder and clears her name.

Imagine leaving behind friends and family who believe you committed suicide when you didn't. That's pretty much the egoist's bleakest nightmare, right? Also, Shari's brother discovers the beautiful girlfriend he's been boning is not only Shari's murderer, but also his biological sister, baby-swapped at the hospital with Shari. Blurgh. 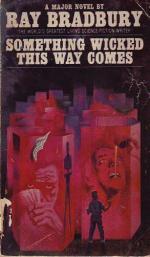 5. 'Something Wicked This Way Comes' by Ray Bradbury

Jim and William are two young teens who live in Green Town, Illinois when one cold October night, a carnival rolls into town. Cooger & Dark's Pandemonium Shadow Show promises adventure and excitement, but William's father has a bad feeling about it - and he's right. Soon townspeople are under the lure of the carnival owner, Mr. Dark, who bears a tattoo for each person he has mysteriously compelled.

Carnies, you guys. Carnies. And these carnies aren't just vaguely menacing and creepy like usual. They are legitimate malevolence come to town to steal your soul! 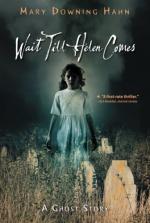 Molly and Michael are young siblings who have just learned that their mother and step-father are moving them and their odd, alienating step-sister Heather to a huge house in the country. Heather is soon haunted by the ghost of a young girl named Helen, and when Molly and Michael try to reach out to her, she refuses their help and grows increasingly troubled.

The book is about joining families and the stress that can drive apart new step-siblings. It's pretty much a newly married couple's nightmare that their kids won't get along. The ghost is the least troubling part of this equation. 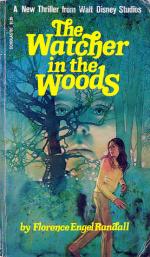 7. 'The Watcher In The Woods' by Florence Engel Randall

Fifteen-year-old Jan and seven-year-old Ellie move with their parents from Ohio to a big, isolated house in Massachusetts. The house is perfect, but Jan is never comfortable there, always sensing something amiss. She feels the presence of a "watcher" outside the house, and Ellie can hear the watcher, reverse-writing messages from beyond as broken mirrors and other mysterious events begin to escalate.

It would be disappointing to invest a huge down payment on your dream home only to discover that your children are losing their minds there. Plus Ellie keeps breaking all the mirrors, and those things don't grow on trees. Kids are expensive. 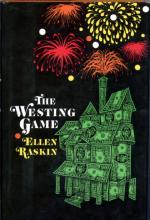 8. 'The Westing Game' by Ellen Raskin

Self-made millionaire Samuel Westing passes away, leaving behind sixteen potential heirs and a series of clues leading the eight teams of two on a merry chase to inherit his $200 million fortune.

Posthumous chaos! This is why we make wills, people, so our funerals don't turn into that Michael J. Fox movie Greedy.

9. 'Where The Wild Things Are' by Maurice Sendak

Little mischief-making Max is sent to bed without supper when a magical forest and sea grow in his room, carrying him to an island of his imagination, run by savage little beasts who throw a wild rumpus and crown Max king.

See Lord of the Flies, above. Boys cannot be trusted to run things. 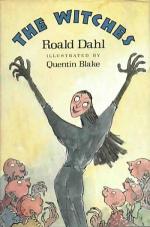 A boy lives with his grandmother after his parents pass away, and the two travel to a fancy hotel on holiday only to discover that the hotel is the site of a convention of witches. The boy and his grandmother must team up to outsmart the diabolical crones.

This hotel is overrun by mice - okay, mice that were once children before the witches potioned them into hairy little rodents. But still, a mouse infestation could ruin any luxury vacation. Plus, you know. Witches.

As an aside - why do the titles of so many creepy children's books begin with the letter "W"? The last five titles on this list are all W titles. Weird.

So speak up in the comments, friends. What kids' books spook you?

Great list, but there are two more that give me chills, then, now and forever: Neil Gaiman's Coraline and Maurice Sendak's Outside Over There.

Neil Gaiman's "Coraline" - I still think about it every time a see a button, which is utterly deterimental to my daily life.

And I'm not sure it's really a kids' book, but Iain Banks' "The Wasp Factory." To this day, I can't talk about the bit in the hospital.

"Lord of the Flies" is incredible, although not exactly a kiddie book. In that book, we adults look on in horror at what these children are up to. Roald Dahl, on the other hand: he's scary to adults because he is in cahoots with the little wild rumpuses. And "The Witches" is one of his best. Maurice Sendak is in another league altogether. I'd call him a poet of the unconscious. Now THAT is scary.

Lord of the Flies traumatized me when I was younger. Piggy! Ugh. I was convinced, because I was chubby, that I would end up being murdered too. It still bothers me, because they were young children killing other children. Haven't read any of the others, but I am totally buying them now. My kids will have these available to them lol. I own Coraline and will be reading that one as soon as I get the chance.

The book that I loved as a kid was the Scary Stories to Tell in the Dark collection. If the stories didn't scare you, the freaky pictures surely would. There is one story in particular that still freaks me out. It's about a woman who is riding a train, by herself, at night. These men get on and the one in the middle is smiling and staring at her the entire way. The other two get up and say goodbye to the smiling man, leaving her alone with him. He never says anything and just sits there like that. Then the train goes around a bend and the man falls off his seat, reavealing that he has a gunshot wound to the head. Why does this scare me? Because I used to ride the train by myself at night! Could you imagine? You're alone with a dead guy, who has clearly been murdered by the two creeps you were just alone with. Maybe it isn't that scary, but it sure as hell freaks me out.

I used to read the Goosebump books as well, but never found those to be scary. Instead, I prefered watching Are You Afraid of the Dark? on Nickelodeon :)

What about the Scary Stories to Tell in the Dark series?

Those were all pretty messed up, and the cover art still makes me uneasy.

What about the Scary Stories to Tell in the Dark series?

Those were all pretty messed up, and the cover art still makes me uneasy.

Wait Till Helen Comes was so creepy to me as a kid that even though 20 years went by without me owning or seeing it, I still remembered the name of it to recommend to my stepkids when they wanted a scary book. Most people I mention it to haven't heard of it, so hooray for seeing it included in this list!

The Golding was most certainly not written for children, and I don't think the Bradbury was. May I add Rupert Bear - specfically "Rupert's Christmas Tree"? It terrified me as a small child, and I honestly believe it was my first step to appreciating suggestive horror fiction - the M. R. James kind - and then writing it.