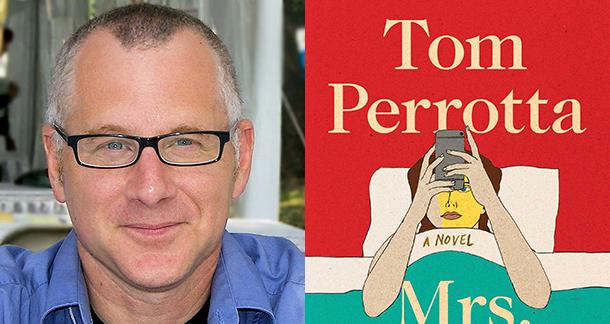 Many families have that uncle who gets invited over for Thanksgiving and doesn't quite fit in. The black sheep, who doesn’t understand the concept of polite conversation or hold any of the same values as your family. He’s outspoken and crosses the line before the turkey even hits the table, sharing something completely inappropriate but interesting enough that the family wants to hear what comes next. By the time desert has rolled around, for better or worse, the black sheep has shared numerous memorable screwed up stories.

Tom Perrotta is that uncle for me. His latest book, Mrs. Fletcher, cements him as one of my favorite American writers delving into disenchantment, destructive patterns, and the loneliness of a technologically connected world. I read Perrotta the way people do group therapy: to reflect on my flaws and find compassion for the flaws of others. His novels remind me that if we don’t face our flaws and patterns we could end up lonely and lost, in a life we never wanted but slipped into by default.

His most memorable characters are the tragic ones. His best novel and one of the best American tragedies, Little Children, is full of characters that I still think about. The cheating wife, the porn obsessed husband, the quarter-life crisis dad who cheats, the depressed nag, and the pedophile whose mother still can’t help but love him; I empathize with all of them in some way. It takes a special talent to make me feel any compassion at all for sexual abusers, having experienced abuse myself. Perrotta has that rare of gift of enabling a reader to feel empathy for those who don’t deserve it.

Franzen famously said we write fiction to not feel alone, but it is Perrotta who inspires me to create my own flawed characters and stories.

Jonathan Franzen is also very good at delving into this kind of territory. But where Perrotta has hardcore fans like myself, he is not loved or hated the way the literary world loves and hates Franzen. J. Fray gets Oprah admiration and AWP praise. Many literary fiction writers and lovers think he is a better writer and stylist than Perrotta. Franzen can write circles around not only Perrotta, but almost any other author. Yet, Perrotta’s books are always more memorable, and his characters stay with me, while Franzen’s feel like distant cousins whose names I forget.

Perrotta isn’t trying to write circles around people—that's not his game. He’s gone on record saying he’s not a Nabokov fan, and though he gives love to the great stylist, Flaubert, he’s a very meat and potatoes kind of writer. His books never show flashy prose, they are not about him. His books are about his characters. Characterization is Perrotta’s style. Flawed lonely people are Perrotta’s muses. In his stories, I always want to see if the characters will overcome their flaws or tragically succumb to them. However it all turns out, they feel like family members by the end of the book. I still feel heartache over how Sarah’s life turns out in the final page of Little Children.

I hate the term The Great American Novel. It’s a bullshit term that English teachers and MFA directors probably started in the 80s. I will say that Perrotta is great at following the tradition of The Great New England Novel. He is carrying on the tradition of Melville and Hawthorne. In The Leftovers, Perrotta delves into the dysfunction, religious fervor, and anxiety that permeates North Eastern towns. Having lived in New England for a few years, the book captures the characters you see sitting alone at the local diner or at Starbucks, wishing they could leave.

Finishing up his latest, Mrs. Fletcher it’s not the masterpiece that Little Children is (in my top 5 novels), but it is another memorable story by Uncle Tommy. Another lonely mother, another lost asshole son, whom I pity, care for, and whom I feel like I know personally.  He uses third person to tell the story of the mother, switching to a humorous first person voice to tell of the son’s struggles with college. Like he did with Election, he’s helped me connect with characters I should hate, but end up loving by the end of the book. I always get a boost of inspiration to write after finishing one of his books. Franzen famously said we write fiction to not feel alone, but it is Perrotta who inspires me to create my own flawed characters and stories.