Path to Publication: 'New Yorked' Is Here, So This Is Where I Leave You 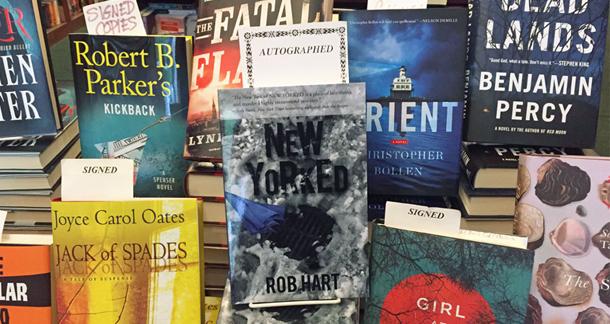 The Death of the Author is an essay published in 1967 by French literary critic Roland Barthes. It argues that an author's life and intent should not be considered in literary analysis—the work should stand by itself.

The French title of the essay, La morte de l'auteur, is a play on Le Morte d'Arthur, a 15th-century compilation of Arthurian legends, written by anonymous authors and reinterpreted by Sir Thomas Malory, rendering it immune to contextual analysis.

According to Barthes, interpreting a work through the lens of the author limits that text to the author's interpretation. By divorcing the work from the creator, by giving it away to the audience, you free the work to become limitless.

The reader is the space on which all the quotations that make up a writing are inscribed without any of them being lost; a text's unity lies not in its origin but in its destination. Yet this destination cannot any longer be personal: the reader is without history, biography, psychology; he is simply that someone who holds together in a single field all the traces by which the written text is constituted…Classic criticism has never paid any attention to the reader; for it, the writer is the only person in literature…we know that to give writing its future, it is necessary to overthrow the myth: the birth of the reader must be at the cost of the death of the Author.

I've been thinking about this a lot lately, because today is the official release date for my first novel, New Yorked. Already, reviews are out. Some that caught on to what I was trying to do. Some that shone new light on aspects I never really thought about. And some people just plain don't like it.

And there's this feeling in my gut, like I want to talk to every person and say: "This is what I meant. This is what I wanted to say."

But I'm not going to do that. First, because it would be crazy, but also, I'm okay with taking a step back and letting the work breathe. It's time to say goodbye to New Yorked.

Where is my mind?

Truthfully, being here, on the precipice, it's an odd mix of emotion. There's what you would expect: Elation and awe like I've never experienced. This is the fulfillment of a dream I had more than ten years ago.

This thing I lived with for so long, beating in my chest like a rogue heart, is something I can now hand to another person.

There's fear, too, that the book might bomb. And now I feel pressure to produce. There's this saying that's common in the music industry: You have your whole life to write your first album, and nine months to write your second. It's just as true in publishing. I'm obsessing over what comes next: The next book, the next story, the next step.

Also, mental exhaustion. Promoting a book can feel like a full time job. The past few weekends I've had to sequester myself in my office so I could meet deadlines for guest blog posts and follow-up with interviewers and finish all those other bits of minutiae that pop up. Worse, every moment I'm not working, I feel like I should be working.

There's an element to this that is, honestly, anti-climactic. I got my author copies weeks ago. Between then and now I signed copies at Book Expo America. I saw it on a shelf at McNally Jackson, and then a Midtown Barnes & Noble. I've gotten reports of it trickling into stores around the country, of Amazon pre-orders showing up on doorsteps. So even though today is the release day, it feels like it got here already. There's no grand unveiling.

The final emotion, the one that's got me thinking of Barthes, is: Separation anxiety.

Reading reviews, I'm struck by other people's interpretations. How readers are responding to one thing or another in the text. Reviewer Benoit Lelievre said Ash McKenna was his "favourite unreliable narrator novel since freakin' Fight Club." I didn't go into the story with the specific intent to write an unreliable narrator—but after reading his interpretation, it makes me see the character, and his upcoming adventures, in a new light.

And in accepting that, I realize the book doesn't belong to me anymore. It belongs to you.

There truly is a feeling of loss here. It was most pronounced standing in McNally Jackson, the first time I saw it on a bookshelf. Just anyone could pick it up and bring it home. This thing I lived with for so long, beating in my chest like a rogue heart, is something I can now hand to another person.

Sitting here now, this is not at all what I expected, but still, exactly how I thought it would be: Incredible.

I'm writing this column on Sunday, two days before it's scheduled to run.

Because today will be a touch hectic. I've got guest posts landing on other sites and blogs, either today or sometime in the coming days and weeks, and I need to keep track. Plus, I need to stare at my Amazon rankings and occasionally Google "rob hart" "new yorked" to see if any new reviews have popped up.

I've got to check the list of people who got galleys and said they would review it. I've got to beg friends and family for honest Amazon and Goodreads reviews. Reviews are the new benchmark by which so much is measured—discoverability, eligibility for retail promotions. They're immensely important for any author you want to help.

And tonight I've got my release party. The beer and wine and snacks have been ordered from Fresh Direct. The Mysterious Bookshop has 70-something copies on hand. We are ready to go

After today, I can look toward my first Barnes & Noble signing and the first Noir at the Bar that I'm hosting.

But, also, the next story, and the one after that. I know the publishing world is fickle and anything can happen. But once there was a wall, and now I'm looking down an open stretch of road, excited and terrified and thankful to take the trip.

January 2012. That's when the first installment of this column ran. It hasn't run consistently since then; I yanked it after a few entries, because at that point all I had was a draft and a dream—not enough to sustain a narrative. I revived it in February 2014, when I signed with my first publisher. And yanked it again, when that publisher closed its doors and kicked me to the curb.

It started up again in August 2014, when my current publisher, Polis Books, signed me. And here we find ourselves.

All told, I wrote 17 installments of this column. I'm intensely proud of it. I was thrilled to have this platform, to meet readers and answer questions and chronicle a process that can often be scary and confusing. I hope I was able to provide some useful information, or a little inspiration, or just a pleasant, momentary distraction.

And now, this is where I leave you.

This is the part where the author dies.

New Yorked will stand as it will. Edits should be arriving soon on City of Rose. I'm working on the first draft of the third Ash McKenna book, South Village.

After that, we'll see what happens.

In closing—thank you, every reader of this column, for the kind words, and questions, and support.

I would not be here without the sanctuary of the communities at The Cult and LitReactor. The first story I ever wrote went through the workshop at The Cult. The classes there and here at LitReactor helped me sharpen my blades. And the friends I've made have pushed me to work harder, be more thoughtful.

Writing is a very solitary act, and it's the communities we build around that act that elevate us. There's no more clear example of that than what goes on in this place.

Thanks for sharing all this with us, Rob.

In retrospect, the length of time the column ran for, the pitfalls and (temporary) heartbreak, well they're probably a much more realistic insight to the act of writing a novel and getting it published.

Good luck with whatever the future holds. And if you feel like dropping any more columns about writing sequels and/or sagas, I'm sure they'd be appreciated :)

Congrats, Rob!! You know I'm down here cheering for you!!

Congrats, Rob! This is awesome. Will be buying a copy.

Congratulations Rob!!! I am so excited that this day came! I will ordering a copy soon!

Joshua Chaplinsky from New York is reading a lot more during the quarantine June 9, 2015 - 9:44am

It's been a long, hard road editing these bad boys, but it was worth it. I vicariously bask in your success!