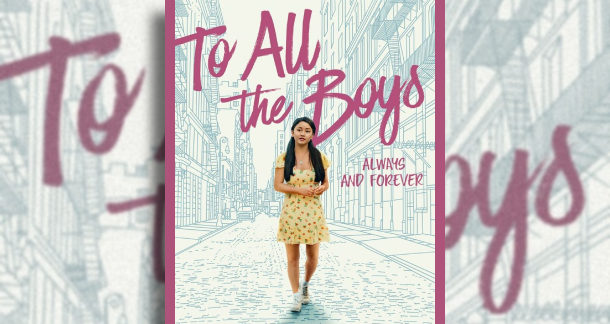 Close to two and a half years have passed since the Netflix adaptation of To All the Boys I've Loved Before exploded into everyone's hearts, and the saga has finally drawn to a conclusion with the latest installment, To All the Boys: Always and Forever.

This movie...gosh. I'm still crying over it. It's such an injection of needed joy, from the bright colors and whimsical set designs to its unwavering belief in the ability of young love to stand the test of time. It's everything I needed right now, a year into a devastating pandemic and a few weeks into a debilitating depressive episode. It's enough to make me think for the first time in a long time that there's hope.

The first thing that I absolutely have to call out about this movie is just how spectacular Lara Jean is as an actress. I mean, it's almost distracting at times. Every feeling crossing through Lara Jean's heart is broadcast on Condor's face, telescoping them into viewers' hearts and minds and making the movie a truly all-encompassing experience.

This is one of the most satisfying series conclusions I've ever watched.

Another absolute powerhouse is Anna Cathcart, the 17-year-old who plays Lara Jean's youngest sister and brings a vibrancy and sheer adorableness to the movie.

The movie is an adaptation but it stands on its own two feet — it's delightful to watch when you know how the story ends after having read the book, but it's a good enough movie to be enjoyed on its own merits as well.

One plot point involves a school trip to New York City, where we watch Lara Jean fall in love with the city. As an avid reader and even writer of books set in New York, I fully embrace the power of literature to telegraph the wonders of this city; that said, there's something about seeing it on screen that just...well, brings it to life.

Watching Lara Jean fall in love with the city, from late-night escapades to hitting all the major tourist destinations to the very minutiae of a rooftop party and having heart-to-heart conversations with strangers — it all reminded me so strongly of my own love story with New York. Watching it was emotional in so many ways, nostalgic and beautiful and heart-breaking, because that's not (currently) the city we have.

And the way the movie handles the end of high school? Phew, the feels that inspired! Like Lara Jean, I graduated knowing I wouldn't be going to college anywhere near the people who had meant the most to me throughout my high school career. It's such a bittersweet feeling, when you're both elated to get into your future and devastated at leaving all you've known behind.

The movie captures it so excruciatingly well, and I found myself crying and reliving those final days of high school with more nostalgia and positive feelings than I've had in a long time.

I used to think my own end-of-high-school experience was unique (and in a sense it very much still is) — I went to an overseas boarding school and we knew the likelihood of staying friends with our closest confidants was slim-to-none — but watching this movie put a shining light on the fact that...everyone goes through something similar at the end of high school.

It's something that many YA novels have attempted, and some really well, but Jenny Han in the original book, and the cast and crew of this movie, really shine at it. There's something about watching Lara Jean and Peter struggle to come to terms with their future that really highlights what is an absolutely real struggle for high schoolers the country (and world) over. And I think it's utterly beautiful that we have this movie now that can show them — there is hope.

More than the other two installments in this series, To All the Boys: Always and Forever is a movie about friendship, family, and finding yourself, in addition to being a beautiful love story. And that's saying something, because one thing I loved about the previous two movies is their focus on those other aspects!

I can't get enough of Chris and Lucas, and the sister? Lara Jean's father? Trina, who joined the story in the second movie and is, in a word, delightful? They all make the story just as much as Peter and the romance do.

Ultimately, the verdict is simple: this is one of the most satisfying series conclusions I've ever watched. If I could, I would pay Netflix money just to keep churning out these movies, one per year, going through life with Lara Jean, Peter, Chris, Lucas, and the rest of their crew.