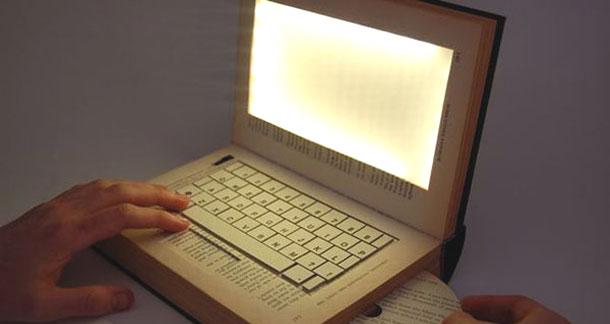 The book remains the same. From scratched wax tablets to scrawled parchments to leather-bound beauties to airport paperbacks, the novel has largely been experienced in a uniform way: you open the front cover and commence reading. Close when finished. Experience flood of words and ideas and emotions if you’re lucky. Experience mild diversion if you’re not. Still, the medium has barely altered. Few authors strive to make their books anything beyond a staid vessel for the linear text within. A wad of paper leaves stuck between two flaps of cards, glued up and shelved. Plot from A to B to C. It’s served us for centuries, and could happily bear us out for centuries more. Postmodernism has gutted and reassembled the novel without altering the constituent parts. Text remains text, with the occasional picture. Yet things are changing. The ways we process knowledge and ideas, the ways we communicate, are shifting. It may be time for literature to shift in turn. We may just be at a crucial turning point, at which a willing writer could, if so inclined, take part in the forming of a new literature that fully embraces this unprecedented technological integration into our lives.

The majority of our human interactions do not take place in person. One could conceivably gain a huge network of followers, fans and admirers without ever leaving the house or getting dressed. A little online charisma, appropriate deployment of words, and a connection can be made spanning the whole globe. We spin an online identity, attempting to be witty, profound, maybe even a little sexy. In a sense, we’re all writers now.  Authors of any salt must blog into the wee small hours, ruthlessly network, and maintain an online presence. Lasting friendships – even romances – are forged entirely in cyberspace, and are no less intense or valid than those in the physical world. Our world has changed, and we’ve changed with it. Or the other way around. Regardless, the written word adapts to us. Decide what you believe literature should be: if its duty is to mirror our inner lives, to offer consolation in a cruel world, to stagger blindly towards an absolute truth, or even to highlight just how shit existence can be: shouldn’t the narrative method shift to accommodate the fact that stories, and how we tell them, has changed? Or can change? Or must change?

There have been early adopters, and probably far more follies and failures now lost as mere curiosities. One success story is Geoff Ryman’s website/novel 253, which arrived on the web in 1996. The basic premise is thus: a tube train in London with seven carriages has 252 seats. The driver makes 253. Each occupant of each seat is given a small part of the overall story in this train journey. Oh, and each of those stories is exactly 253 words long. It can now be bought in as a more prosaic print book with an index (still worth a read) but the website was something else. As the inner monologues of the hapless 253 play out, their stray observations and thoughts drifting to observe the other passengers, hyperlinks let us click through between the characters. Free from the linear norm of a novel, a slight unease forms in the reader’s belly: we are no longer passive readers. We guide the narrative. The paths have been laid out in wait for us, but we’re the navigators deciding whose mind to flit into next.

Literature can change. What’s needed are the mavericks, the experimenters, willing to try something a unique, to redefine our centuries old concept of the novel.

The delineating of new narrative parameters reminded me of Oulipo, a collective of writers and mathematicians who enforced strange rules and boundaries in pursuits of new fictions. This famously included Georges Perec’s La Disparition, a mystery novel written without the letter e (a feat recreated by the English translation: A Void), where the opening line of Hamlet’s famous soliloquy is rendered thus:

“Living or not living, that is what I ask.”

or Poe’s The Raven:

“Quoth that Black Bird, ‘Not Again’”

Perec and his cohorts (Italo Calvino was another famous name) sought to reconfigure the narrative tools used for centuries in startling and evocative ways. Restriction was the method, and restrictions resulted in authors producing beautiful and fascinating works of art. This risks seeming gimmicky. Forget that. There are more than enough arbiters of the traditional realist novel, those struck dumb and rigid with Franzinitis, unable to rattle their phlegmatic doctrine of what fiction should or could be. The contemporary reader cannot hope to find the experimental pioneers, those who embrace the future and do not fear it, hobnobbing at literati soirees or courting Oprah’s diktat. But are the small presses doing much, or the self-published? That isn’t meant to sound like a rhetorical accusation. I’ve genuinely no idea. A side-effect of unprecedented communication is the bombardment of information. I’m recommended upwards of ten novels before I’ve even had time to check my emails. There’s just no way to read them all.

Neal Stephenson, as always, leads the way. From the cyberpunk awesomeness of Snow Crash to the gripping recreation of WWII cryptography in Cryptonomicon, Stephenson has never shied away from technology. In the last couple of years, he and other authors of speculative fiction have collaborated on a grand work called The Mongoliad, distributed as a series of apps for iOS and Android platforms. Seeking to encompass media besides plain text, one of the most innovative authors of our time forging new paths in technological integration with fiction? Wow! But, unfortunately, it simmered and came to completion with very little fanfare. The print edition was recently released. The reasons for it not being huge are myriad: too specific to a platform yet to fully embrace eReading? Too strange a subject? Maybe just not that good? Still, a bold move, and one that deserves recognition.

Even the classics are fit for experimentation. Exquisite and intricate apps exist that offer bonus materials appended to classic works (T.S. Eliot’s The Waste Land is a fine example, with original manuscripts and readings to flesh out the original text) or, indeed, change the reading experience entirely. A version of Frankenstein lets the reader choose the narrative’s path, or reply to the characters. The gothic classic as choose-your-own-adventure. Some might cry heresy, but the original’s still available in all good book stores for the fearful Luddite.

Why do the protagonists in most works of fiction never mistakenly feel the vibration of their phones? Why do they not tweet about their adventures – asking for advice, perhaps – or agonize over which Facebook profile picture best accentuates their sharp jaw and/or glorious bust? Technology has changed the human experience drastically in just a few decades. In an age where our use of language is formed and remixed almost annually, why does literature generally fail to engage with the changing state of a human consciousness? Dennis Cooper’s The Sluts was largely set on the pages of a male escort website, but familiar tags arise once again: metafiction, innovative, experimental. None of those are detrimental in themselves, but typify the exact kind of fiction the mainstream struggles to integrate into the literary epicenter. Jennifer Egan’s A Visit from the Goon Squad, winner of the National Book Award, has a chapter in which a character’s thought processes are depicted as a Powerpoint presentation. Despite these few instances, it’s rare for a novel to feel as drenched in tech as we are in real life. An author’s fears are frequently well-founded: what’s apt now may drop to the sidelines soon. If your novel references Myspace then that’s going to jar or, soon enough, provoke a scrunched face of confusion as a future-child turns to her parents and asks just what this Myspace thing was. Culture can date, and the process of decay is accelerating. An author who uses technology risks dating their work, or revealing that they’re actually awash in these new modes of communication.

The important question, however, does not come from why exactly these things aren’t mentioned in the narrative. Besides the issue of dating the work, or even the author’s Luddite ignorance, it can derail a whole plot in a formalistic sense. The Catcher in the Rye might not happen if Holden were able to find likeminded non-phonies on a forum (failing that, he could unleash splenetic fury upon YouTube imbeciles). The Odyssey wouldn’t work – or would at least work differently – if Odysseus could text his beloved. Viktor Shklovsky made the point that Sherlock Holmes, the world’s greatest detective, couldn’t solve his cases straight away because if he was that good, the story wouldn’t be long enough. There’s truth there, and it’s exactly why modern horror films have to find some way of having their protagonists/victims losing their mobile phones or not have any signal. It’s easier to communicate with thousands of people at once than at any point in history. The means of communication have changed a great deal, and will change even more in the near future. Does the novel exist outside of technological progression?

eReaders have changed the reading experience. More people are reading than ever before (despite the immortal whining about cultural decline; the books have conceivably decreased in quality, but are being read more than ever) and there are more novels than anybody could read in a lifetime. Filmmakers have, in the last century, moved into sound, color, into gimmicky side-roads like 3D and Smell-O-Vision, through to digital editing and the democratic free-for-all of YouTube and Vimeo. In music, there’s been quite a trajectory from Chopin to Skrillex. Whatever the art-form, it has always been dragged, kicking and screaming, by innovative artists who want to redefine the medium. It would be ridiculous to suggest that literature hasn’t changed (and that’s a whole other essay) but the materials stay the same. Books are books are books. Until now. In the last decades, authors have gained the potential to distribute and formulate their work in new and exciting ways. Literature can change. What’s needed are the mavericks, the experimenters, willing to try something a unique, to redefine our centuries old concept of the novel.

The book doesn’t have to remain the same.