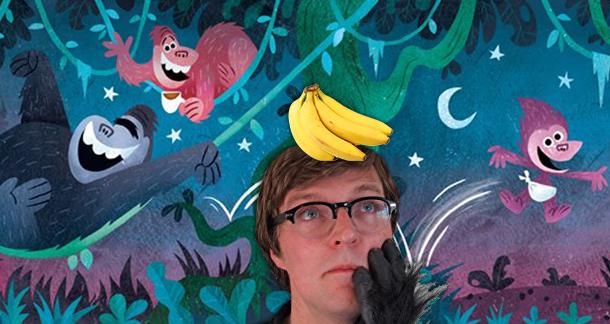 My publisher was concerned about gorillas taking their clothes off, possibly for money, I think.

Stripping gorillas must be a big problem in some parts of the country, because this seemed like a deal-breaker. My first children’s book was originally called Gorillas A-Go-Go, but that title wasn’t going to fly. The A-Go-Go part implies stripping, someone said.

My first reaction was to squint at the phone, wondering if I was hearing things correctly. Gorillas A-Go-Go is a picture book for preschoolers about a pack of insomniac apes that simply love to get down and boogie (with their pajamas on at all times). After some back and forth with my editor, we compromised on calling it, Go Go Gorillas. It’s a change I love.

Toying with the placement of Go Go is a subtle, maybe head-scratching edit, but it represents everything I love about children’s book publishing.

Kid lit is a unique world that has its own rules and is far more complex than it looks from the outside.

When people ask what it’s like to have a picture book published I tell this anecdote, first and foremost, because the idea of a gorilla bump-n- grind makes me laugh. But I also tell that story because it perfectly illustrates the huge amount of attention that goes into these tiny books. The picture book business is filled with razor-sharp people who take this fun work very seriously.

[A children's book] is the biggest pot of water ever watched, and it boils when it is good and ready.

Here are three eye-openers if you are a newbie like me.

1. The Author and the Illustrator Work Independently

This was my biggest surprise. But when you step back, it makes perfect sense.

Unless the author is also an illustrator (Like Dr. Seuss or Mo Willems), the writer has no input regarding who draws the pictures in the book. The writer is actually out of the process entirely. The author might see some rough sketches, but is kept mostly in the dark until the finished product arrives one glorious day as a fully-illustrated PDF. (And it is a huge thrill to see your words in the hands of a professional illustrator.)

At first I assumed that since the writer wrote the story they should be in control of the art. But that would be a pretty terrible idea (at least in my case). Most writers, like me, don’t have much of a visual art background. We are strictly word nerds. I am not even sure I could name all the parts of a color wheel.

I quickly realized that just because a writer has seen a lot of children’s book illustrations, that doesn't mean they are qualified to make choices about all the complex elements that make the visual side of a picture book sing. Me telling my skilled, brilliant illustrator Nate Wragg how to draw a gorilla doing the tango would be like telling a four star chef how to cook a steak simply because I have eaten a bunch of them before.

The children’s book industry has a nice buffer zone between the artist and writer. For this, we should all be grateful.

2. An Insane Amount of Work Goes into Those Tiny Books

Back to my favorite topic: stripping gorillas.

The difference between Gorillas A-Go-Go and Go Go Gorillas is the best example of how much thought goes into each page, each sentence, and each word of a children’s book. Kid lit is often overlooked because of its short length and the equally short stature of its audience. That is a shame. Before this, I had five grownup novels published and I can say without a doubt that no 32 pages of my previous work were as thoroughly scrutinized and thought about by an editor as in a children’s book.

My editor and I took months to work, rework, and focus on roughly 300 words of text. Every bit had to be enjoyable for parents to read aloud, but it also needed to be simple enough for early readers. The Go Go Gorillas cast of apes (and one meddling human) had to be as realistic and empathetic as any character in a grownup’s novel. We beat our heads against the wall so that this silly little story had dramatic tension and purpose and heart.

The most eye-opening stage of the process was actually copyediting. A children’s book copyeditor’s job is not only hunting for typos, but also being a neutral third party observer.

My copyeditor raised a red flag because the story apparently creates an existential paradox. In the book, the gorillas stay up all night dancing and partying instead of sleeping. When children visit the next day, they are asleep. Since the text never mentions that night is a special night, the copyeditor was worried readers might assume these apes dance every night and get into trouble with their safari guide every night in some hellishly endless disco loop. A dancing primate mirror held up to a dancing primate mirror.

But it’s proof that the attention to detail in a kid’s book is perhaps rivaled only by a surgeon.

My son was in diapers when the book was accepted for publication. By the time Go Go Gorillas actually hit bookstore shelves, he was just entering kindergarten.

It took over three years to get here. The editing takes a long time. The illustration takes even longer because the illustrator isn’t sitting at their desk, just waiting for you to call—they have other work to do (Nate Wragg squeezed my book into his schedule while being the production designer for the Captain Underpants movie). After the words and images are perfect the books need to be carefully printed in full color, usually overseas, shipped to stores and so on.

But mostly, it takes forever, because the author is so excited. It is the biggest pot of water ever watched, and it boils when it is good and ready.

So, next time you crack open a picture book with your little ones, take a moment to appreciate how much work and effort were poured into that tiny tale. In all likelihood, it took a very smart group of folks an incredible amount of time to be part of this moment with your kiddo.

Patrick Wensink is the author of five books, including the bestseller, Broken Piano for President. NPR named his most recent novel, Fake Fruit Factory, one of the best books of 2015. His work appears in the New York Times, Esquire, Salon, Men’s Health, Oxford American and others. In 2017, HarperCollins will publish his first children’s book, Go! Go! Gorillas!. He lives in Portland, OR with his wife and son and fragile ego.

I can't imagine having no involvement in the illustrations!

Did your illustrator's vision match up with yours at all?