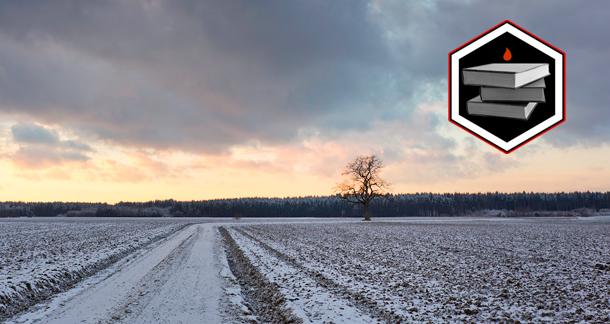 Books can be about anything – elephants, antimacassars, milk cartons – but generally they are not. Books tend to cluster around certain subjects, old favorites cropping up time and time again, like regulars at a bar. But unlike barflies, who all seem to have learned the same hard luck story by rote, writers (good writers) can take the same base material and make it into something entirely original.

For example: three books about roads. On the Road by Jack Kerouac, The Road by Cormac McCarthy, and The Famished Road by Ben Okri

Let’s start with On the Road for no better reason than it’s the least sophisticated of the three. To produce his second and most-famous novel, Kerouac took his own experience of bumming around the States and applied the thinnest fictional veneer to it. He changed names, possibly tinkered with the timeline, but essentially this is a record of events and as a result, the road in this book is just that – not a main player, but the backdrop for events. Of course, a setting is never just a setting. Kerouac, with his finely tuned sense of zeitgeist, understood very well that to a generation emerging from war, roads symbolized escape, freedom and progress. Kerouac’s technique was to snag that energy and allow it to pull his writing along, much as meeting Cassady, Ginsberg et al gave him real-life momentum.

He does this with the simplest of ploys: vocabulary. Kerouac’s verbs are all about motion. Here he is describing Dean Moriarty (Cassady’s fictional alter ego) at work as a parking attendant:

…he can back a car forty miles an hour into a tight squeeze and stop at the wall, jump out, race among fenders, leap into another car, circle it fifty miles an hour in a narrow space, back swiftly into tight spot, hump, snap the car with the emergency so that you see it bounce as he flies out; then clear to the ticket shack, sprinting like a track star…

Dean parks cars the way most other guys score touchdowns, but even Kerouac’s moments of contemplation are full of movement:

If you drop a rose in the Hudson River at its mysterious source in the Adirondacks, think of all the places it journeys by as it goes out to sea forever.

On the Road is a record of its time, much as a book about medieval power play might be set in a castle. If you want writing which digs deeper, The Road by Cormac McCarthy is the place to look.

The plot is straightforward: a father and son travel a post apocalyptic landscape, heading towards the sea. The road is the line on the father’s map, a physical route, but it is also more than that. The road is the straight and narrow – the line between right and wrong. In this exchange, the son chides the father for giving him chocolate while taking water for himself:

I have to watch you all the time, the boy said.

If you break little promises you'll break big ones. That's what you said.

For McCarthy, the road represents morality. Following disaster, most people have abandoned principle. They rape, murder and eat the dead (and sometimes eat the living, too). They have left the road that the father, charged with the care of his son, is determined to stick to. By reducing life’s choices to the most basic — to eat/to starve, to help the afflicted/to walk by — The Road foregrounds the dilemmas every parent faces and hammers home the point that much as we might lecture them on which path to take, in the end our children will most likely follow ours.

Come on, the man said. Everything's okay. I promise.

But when he bent to see into the boy's face under the hood of the blanket he very much feared that something was gone that could not be put right again.

So far, so Christian, you might say and there is a hint of the Calvinist in McCarthy’s sharp focus on Right vs Wrong. But what happens to the road metaphor when you marry it to an older religious tradition? In Okri’s animist fable, the road itself turns cannibal. The Famished Road, set in post-colonial Nigeria, tells the story of Azaro the spirit-child who inhabits a world between the living and the dead. He witnesses the daily struggles of his father and mother to survive in the dog-eat-dog world of the ghetto and here the road represents the relentless incursion of the modern into an ancient way of life. Before humans, there were no roads is the message and Okri conveys it by having his road destroy anything which gets in its way. Here, after witnessing his father being beaten up by thugs, Azaro has a vision:

I ran through the yellow forests, through deluded generations, through time. I witnessed the destruction of great shrines, the death of mighty trees that housed centuries of insurgent as well as soothing memories, sacred texts, alchemical secrets of wizards, and potent herbs. I saw the forests die. I saw the people grow smaller in being. I saw the death of their many roads and ways and philosophies.

Okri’s technique is to subvert our Western notion of roads as progressive, dynamic and moralistic. In the animist tradition, all objects have spirits and the road-spirit is always, always hungry, as Azaro’s father explains in this story told to his son:

The King of the Road was so angry with human beings for starving him that he ate half of the number of people who went on that journey. Then he sat down and devoured the great dish.

He ate all of it and his eyes began to swell because it made him even hungrier than he was before. The more he ate, the hungrier he became.

For writers every symbol should be rich in potential. We can go with the obvious, like Kerouac; we can dig deeper but stay within our familiar traditions, like McCarthy; or we can transform it entirely, like Okri. The choice is yours: pick a route, draw a map and take whichever road will make your reader’s journey unforgettable.

'The Sea is My Brother' by Jack Kerouac

One great book about the road that grabbed me from the beginning was In Search of Captain Zero by Allan Weisbecker. The general description from his website:

"In 1996, Allan Weisbecker sold his home and his possessions, loaded his dog and surfboards into his truck, and set off in search of his long-time surfing companion, Patrick, who had vanished into the depths of Central America. In this rollicking memoir of his quest from Mexico to Costa Rica to unravel the circumstances of Patrick's disappearance, Weisbecker intimately describes the people he befriended, the bandits he evaded, the waves he caught and lost en route to finding his friend."

Although I do not surf, this book makes me want to grab a board and hit the nearest body of water, which would be very awkward as the board would be bigger than my bathtub, and my kids might take issue with me trying to surf in the midst of them playing mermaids. This book is about more than surfing and travel, it's about a man's brutual honesty with himself.

His writing is so crisp and viivd you feel like you're right there with him, whether he is in the water, camping out by his trailer on the beach, or dodging bandits south of the border. The book is engaging, at times hilarious, and at other times bordlerine morose. That's my way of saying, "I laughed, I cried."

In short, if you're looking for a very well written book about travel and being on the road, I highly recommend this book, for what my opinion is worth.