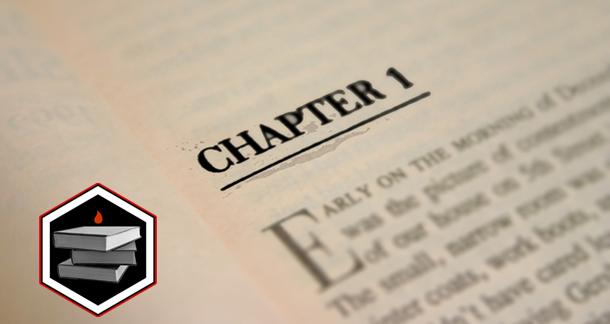 January is the month for beginnings; a time for ignoring the obvious fact that nothing much ever changes and forging regardless into a new year, full of optimism. We start life full of optimism too — unblemished by experience or disappointment. This might be why so many writers eventually turn to memoir. The beginning of life represents the foundation on which we are built and the subject of we proves irresistible to most of us, writers not excluded. Some writers turn to the subject of their beginnings as a postscript to an otherwise successful career in fiction. Others are famous only for their memoir. The stories themselves are similarly dissimilar and it’s striking when you set them side by side, how different their purposes and tone are.

Here are three books about beginnings — three memoirs — side by side. Some have generated a massive response from their readers, clearly signaling that here are experiences that many feel they share. Others do less in the way of crowd-pleasing, but are probably also more enlightening about how our early experiences shape us. But all share one quality: they’re addictively consumable in that way only true stories — or stories we claim to be true — can be.

'The Liars’ Club' by Mary Karr

I’m going to admit to some discomfort with memoirs, probably because social media has turned us all into raging attention whores and for many of us that means using our kids, pets and any other photogenic member of our family to provide us with stuff to talk about. Using real people to furnish our writing career is nothing new. In the introduction to The Liars’ Club, Mary Karr remarks on her decision to write a memoir rather than fiction thusly: when fortune hands you such characters, why bother to make stuff up? 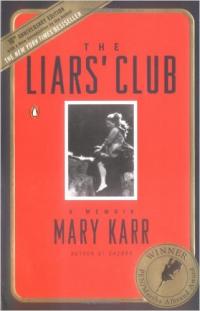 Why indeed? Because other people’s lives are not yours to plunder, I suppose, but plunder Karr does, and if it sounds like I am drawing a parallel between those people who use their kids as blog fodder and Karr’s book then I am and I make no apology for it. The Liars’ Club, a huge success at its publication in 1995 and still shifting copies now 21 years later, relates Karr’s upbringing in a Texas oil town. Karr tells in forensic detail how her mother, married six times (at least, I lost count) before she fetches up in Leechfield and meets Pete Karr, slowly succumbs to mental illness and alcoholism, moves to Colorado, runs through an inheritance and finally returns to Texas and remarries the father of her two daughters. A soap opera could not rival the drama of Karr’s early life and a skeptical reader, now free of the hype that surrounded the book upon its publication, can be forgiven for asking questions about its resemblance to the yarns Karr’s father and his friends used to entertain each other with in the eponymous Liars’ Club. Make that connection and a twinkle appears in the author’s eye.

If Karr is playing games with us, she never admits it, but the hints are there and even if they weren’t, no one can hope to play back the events of their childhood with Karr's degree of detail. Our accounts are partial and emotionally coloured: Karr herself throws her mother under the bus with an alacrity and sure aim that would seem justified until it hits you that mother-blaming provides a sturdy plot device for a substantial swathe of upmarket women's fiction. Her story, while gripping, is a tale not a testament and the quote below, also taken from the introduction, only serves to illustrate that for a story to resonate, it must appeal to our common experience. Good fiction is designed with exactly that in mind — it creates situations designed to evoke certain emotions in the reader. What are the odds that a true story would happen to appeal to our common experience in exactly the same way?

In towns across the country, readers of every class and stripe confided about childhoods that certainly differed from mine in terms of surface pyrotechnics — fires set and fortunes squandered. But the feelings were identical.

'My Dark Places' by James Ellroy

Of the writers featured here, Ellroy most clearly escapes the accusation of using the lives of his loved ones to fuel his career. My Dark Places was published in 1996 when Ellroy was riding high on the success of The LA Quartet and had no need to dig into his private life to pad his resume. Yet dig into his private life he does. My Dark Places not only sets out the sordid details of his early life complete with shoplifting, drug use and depression, it examines in unflinching detail an event that most of us would probably prefer to lock in a memory-casket and bury deep in some uncharted corner of our unconscious mind. When Ellroy was ten and dividing his time between his divorced parents, his mother was murdered, probably by a serial killer. The perp was never caught. 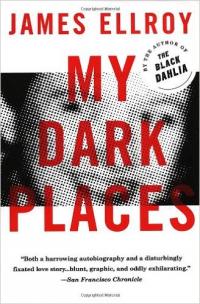 Ellroy tells the story from two perspectives: in the manner of a true crime pulp, relating the investigation into his mother’s death as though standing on the sidelines, the hardened reporter, taking notes. But the facts are just a wall, as he admits. Behind the procedural details about time, place and manner of death, hides a kid who pretends he’s delighted that his mother, the woman his father describes as a no-good whore, has met a well deserved end. Now nothing stands between him and a permanent home with his father, just the two of them like good old buddies. That fantasy lasts about four years. By early adolescence, Ellroy has become obsessed with women who resemble his mother — redhaired, buxom — and disillusioned with his ailing father and his get-rich-quick schemes. His father dies, but the fixation with the redhead does not fade. By the age of forty six, Ellroy has embraced sobriety with the same fervor he once embraced weed and Benzedrex inhalers, but he’s still obsessed. He hires an ex-homicide detective called Bill Stoner to reinvestigate his mother’s murder. Together the two men follow up every possible lead, culminating in an Unsolved Mysteries segment which Ellroy hopes might jog memories. Nothing comes of it.

I had to know more Ellroy writes in the closing pages of the book. I didn’t want it to end. I wouldn’t let it end. I didn’t want to lose her again. In the course of his investigation, Ellroy learns every possible fact about his mother. He learns and accepts the truth about both his parents: that his mother was a decent woman who did her best by her child, that his father was a weak man who tried to buy his son’s love with lies, but that is still not enough. During their separation, Ellroy’s father crouched outside his ex-wife’s window and spied on her, looking for evidence of her moral turpitude. Ellroy sees the parallel and also does not deny that his own obsession with the redhead is what drew him to crime fiction, that in every novel he has produced, he has written and written and written about his mother’s death. In the end you feel that Ellroy turns to memoir in despair. Fiction will never cauterize the wound left by the redhead.  As it turns out, neither does the truth.

Like Karr, Flynn is a writer most famous for his memoir. The first of three, published in 2004, Another Bullshit Night in Suck City tells the story of how Flynn, working at a homeless shelter in Boston, sees a familiar face amongst the clientele one night. The face belongs to his father. 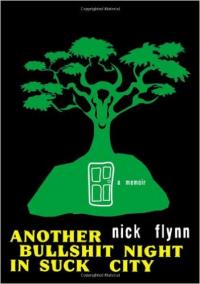 A drunk and a fabulist, Flynn senior leaves his wife and two sons when the kids are young. Flynn’s mother works away her youth in low paying jobs to keep the family fed, shacks up with more unsuitable guys and does not find a happy ending.

Does any of this sound familiar? There’s a pattern to memoirs from writers it seems, like the lyrics to a bad C&W song: Daddy drank. Mommy slept around. I was lonely and read a lot of books. But there’s a difference here, one that separates this memoir from the others. Karr tweaks her narrative to give the reader what they need from a good story. Ellroy sets out his as a case study in psychological obsession. Flynn alone manages to achieve that most precious of feats: to get some distance from his subject. What he doesn’t remember, he doesn’t make up. He presents his parents with dispassionate love. These are people you can recognize as real. You sense that they would read this book and recognize themselves. In Facebook terms, Flynn is the kind of guy who posts the baby pics, but forswears the captions about feeling blessed. He takes some liberties – there are portions of reconstructed conversations which may or may not be accurate – but that’s OK because these never skew the narrative in anyone’s favour. In Another Bullshit Night in Suck City, everyone comes out the same — flawed, fragile and human. Which is how it should be, because no matter what we do, we’re all headed the same way.

Here, Flynn describes the moment his father appears at the shelter for the first time.

A few hours later my father showed up, made his way to the Cage, presented the bed ticket Captain had given him earlier, disappeared upstairs. No ominous music, no deep chords. He wasn’t backlit as the doors blew open, the wind didn’t pick up, the earth kept spinning. Just another “new guest” – new ones appeared every day. He raised his arms at the door to be searched, just like everyone else. Bottles or weapons I have none, but that man’s father is my father’s son. It all took a few minutes. Nothing was said.

Memory provides us with a powerful tool for understanding ourselves. What we remember and what we forget says more about us than the content of the memory itself, because our beliefs provide a frame for our reconstruction of the past. Start from a position of my father hates me and everything you recall will be adjusted to fit into that frame. Those things that do not fit will be discarded. Memoir does not recount the past so much as allow us to glimpse the frame of another: Karr’s discordant relationship with her mother, Ellroy’s obsession with his, Flynn’s acceptance of his parents’ flaws. The lesson for writers is that we all need to be like Flynn and get some distance. Only then can we escape the frame of our beliefs and start to be able to tell something that might be like the truth.