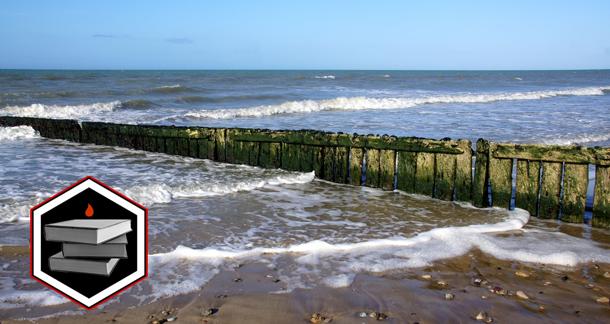 If you happen to visit Paris during the month of August, you, along with the 1,000,000,000 other tourists, will find all the landmarks for which the City of Light is famous – the Eiffel Tower, the Arc de Triomphe, the place where Jean-Paul Belmondo woos Jean Seberg in A Bout de Souffle – all present and looking exactly like they do in the postcards. Only bigger and more full of French people.

In August, the famous Rive Gauche of the Seine takes on a different appearance from that shown in the guidebooks. Why? Because every year since 2002, the mayor of Paris arranges the transformation of the concrete which runs along the river. Trucks bring sand. Palm trees are erected by unsmiling officials. Buckets and spades are distributed to pallid-faced workers with terse instructions that maintenant on se rigole.  In August the banks of the Seine become a beach.

We love beaches. We take pictures of the sea between our knees, build castles on them, wear less clothing than we should on them. Beaches, for those of us lucky enough to have the money and the leisure to enjoy them, represent luxury, freedom and the opportunity to eat sand with our lunch.

That’s what beaches mean to most of us. In the hands of writers, beaches become something else entirely.

On beaches, Frost tells us, ‘people turn their back to the land. They look at the sea all day.’

'The Beach' by Alex Garland

Ever since the Grand Tour became a thing, the year abroad has become a rite of passage for people on the giddy verge between studenthood and finding a proper job. But in the 1990s, rising incomes and the arrival of the US in the game transformed backpacking from a month languidly interrailing around Europe into a brutal, high-stakes competitive sport. Visiting the places everyone else had visited became passé. Visiting the places no one else had visited, with the aim of bragging endlessly about them upon return, became every trustafarian’s gap year goal.

Alex Garland’s The Beach, first published in 1996, taps precisely into that Generation Y zeitgeist of karma, self-discovery and hard drugs. Richard, a young Brit drifting through Thailand, dreams of adventure and finding the perfect girl. When his discovery of a map to a secret beach paradise snags the interest of the cool and beautiful Francoise, it seems both his ambitions will be fulfilled. Except Francoise has a boyfriend. And Etienne is coming to the Beach with them.

Richard, Francoise and Etienne find the Beach, but paradise? That proves more elusive and it would be easy to dismiss Garland’s debut, which proved to be a massive success, scoring him a gig as regular screenwriter for the likes of Danny Boyle, as no more than a conventional thriller dressed up in dreadlocks and a Che Guevara t-shirt. But The Beach digs deeper (forgive me) than that. Like all the best suspense stories, The Beach has change at its heart. For Richard — whose cultural touchstones are Space Invaders and repeated watchings of the movie Platoon — the beach represents a Nirvana of never having to grow up, the ultimate adolescent fantasy of a world composed of babes, dope and endless games of frisbee. Sadly, real life — no respecter of other people’s Nirvanas — intrudes and Richard finds himself forced to do some rapid maturing. The beach in The Beach represents the unattainable Peter Pan desire to never leave childhood behind. You can lie on the sand as long as you like, goes the subtext, but age gets us all in the end.

'On Chesil Beach' by Ian McEwan

For fans of McEwan, master of the art of ‘narrative sadism,’ On Chesil Beach represents a departure from the author’s usual gross-out-masked-by-elegant-turn-of-phrase methodology. No rape by dogs. No murder by assisted suicide. No childhoods ruined by memories of crapping all over your father’s important documents of state. On Chesil Beach concerns a couple, newly-wed and — because this is set in 1962, when sex before marriage was something the Rolling Stones did — about to lose their virginity. One of them is looking forward to it. One of them isn’t. At all.

This is a character piece par excellence, the whole of the story, bar flashbacks, taking place during the hours immediately after the wedding. Edward and Florence eat dinner, both acutely aware of the bed waiting nearby. On the radio, Harold Macmillan cedes to the US over the H bomb tests. Britain is no longer a world power. The times are changing and all the manners and proprieties that Florence and Edward learned as children are fast becoming irrelevant. Outside the hotel, on the beach, the waves crash relentlessly, the background to McEwan’s thesis about permanence and change. However hard we attempt to rise above the physical, we’re no more able to escape our body’s demands than the pebbles on the beach can escape the crashing water. However civilized we think we are, underneath we’re all just beasts.

When the nuptials don't go according to plan, Edward and Florence end up on the beach, trying to decide what to do next. In the hands of McEwan, the beach becomes a subtle third presence to that conversation, a witness to events. He barely mentions it, but you never forget it’s there.

[Edward] had read aloud to Florence from a guidebook that said that thousands of years of pounding storms had sifted and graded the size of pebbles along the eighteen miles of beach, with the bigger stones at the eastern end.

'To the Lighthouse' by Virginia Woolf

The lighthouse exists, but in Cornwall, not in Skye, the setting for Woolf’s fifth and possibly most accessible novel. Woolf and her family holidayed in St Ives for years, with the Godivey lighthouse at the end of the pier part of that domestic backdrop. We don’t know if the Stephen family ever planned a trip to the lighthouse, to take provisions to the keeper, a trip they never managed to fulfill, but that unfulfilled trip forms the centerpiece of the fictional work. The Ramsay family holidays at a cottage on the island of Skye. With them are several guests, including Lily Briscoe – a young woman who hopes to become an artist or author, but whose confidence is crushed by the offhand remark of another guest that women ‘cannot write or paint’.

When we talk about modernism in fiction, we usually talk about Joyce (or possibly Proust) but it was under the pen of a woman that this particular bird developed wings and took flight. Everything attempted before Lighthouse or its predecessor Mrs Dalloway seems bogged down in its own sense of self-importance. No heavy-handed word play a la Joyce, or Proustian raptures about le paysage, Woolf simply takes the newly minted idea of steam of consciousness and allows everything within her characters’ heads to spill out onto the page. Preoccupations, petty jealousies, irritation at the quirks of others: it’s all there, in startlingly realistic form. Lily Briscoe broods over the guest’s remark, she thinks about her companions, especially Mr. Ramsay, the deeply annoying paterfamilias, and in later portions of the book she reminisces about the earlier holidays at the cottage. In a novel this unformed, you need a lynchpin and that’s where the lighthouse comes in. The beach and the sea, the trip to the lighthouse — nixed in superior fashion by Ramsay in the first few pages — anchor the story, pulling us back to reality in the same way as a noise or movement interrupts our daydreams. Woolf aimed for hyper-realism, so metaphor doesn’t have a place here. The beach is what it is and although you can theorise about the meaning of that trip to the lighthouse and of Ramsay standing in the bow of the boat, calming the storm, that is what it is, too. A trip, much postponed, finally taken.

[Lily Briscoe] gazed back over the sea, at the island. But the leaf was losing its sharpness. It was very small, it was very distant. The sea was more important now than the shore. Waves were all around them, tossing and sinking, with a log wallowing down one wave; a gull riding on another. About here, she thought, dabbling her fingers in the water, a ship had sunk, and she murmured dreamily, half asleep, how we perished, each alone.

In Neither Far Out Nor In Deep, Robert Frost, earnest purveyor of all things obvious, noted that when we visit the narrow strip of sand which separates solid ground from restless waves, we all tend to do one thing. On beaches, Frost tells us, ‘people turn their back to the land. They look at the sea all day.’

Except if they are in Paris, when they get to look at the Seine instead.