The World of Yuri Herrera 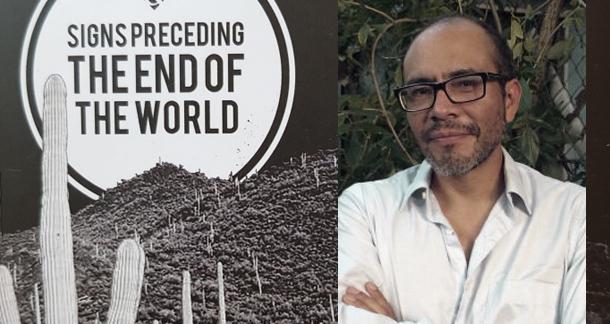 "Yuri Herrera must be a thousand years old. He must have traveled to hell, and heaven, and back again. He must have once been a girl, an animal, a rock, a boy, and a woman. Nothing else explains the vastness of his understanding."

Those words from the great novelist Valeria Luiselli express how I feel about Yuri Herrera. I was introduced to his work when I read Signs Preceding the End of the World, a book that deals with the border between Mexico and the US in ways I hadn't seen before. More than talking about the physical crossing, Herrera cracks open the souls and brains of his protagonists and exposes the constant shifts inside, the hopes and fears, the jarring translations of language, being, and culture.

I could go on and on about why you should read Herrera, but the reasons will become obvious as soon as you start one of his books.

Luckily for American readers, And Other Stories has already translated and published his two subsequent novels, The Transmigration of Bodies and Kingdom Cons. Both are different from Signs Preceding the End of the World, but they share a few elements that make Herrera's writing so enjoyable: sparse prose, a constant jumping between the outer world and the inner world of characters, a deep understanding of human nature, and the effects of disorientation and code switching.

Reading Herrera is entering a world where simple philosophy, mistrust, hustling, and movement are constants. His characters are constantly doing things, meeting people, and going places. This gives his writing a frenetic pace. Furthermore, he writes in shorts bursts that betray an obsession with economy of language. He can offer entire backstories in a short paragraph. Here's a taste from Signs Preceding the End of the World:

You don’t lift other people’s petticoats.
You don’t stop to wonder about other people’s business.
You don’t decide which messages to deliver and which to let rot.
You are the door, not the one who walks through it.
Those were the rules Makina abided by and that was why she was respected in the Village. She ran the switchboard with the only phone for miles and miles around. It rang, she answered, they asked for so and so, she said I’ll go get them, call back in a bit and your person will pick up, or I’ll tell you what time you can find them. Sometimes they called from nearby villages and she answered them in native tongue or Latin tongue. Sometimes, more and more these days, they called from the North; these were the ones who’d often already forgotten the local lingo, so she responded to them in their own new tongue. Makina spoke all three, and knew how to keep quiet in all three, too.

There is something special in Herrera's writing, something hard to identify. However, that thing is present in the three books of his available in English. This points to two things: a very strong voice and very good translators. The words flows, even when they are bizarre or in Spanish. His books demand to be devoured quickly, which accentuates their lingering nature, because the time they spend in your head is much, much longer than the time it takes to read them.

Mexico has given the world many great writers, and Herrera is now holding that torch. He brings the idiosyncrasies of his culture to the page, then takes them further. There is a lot of strangeness in his narratives. The weirdness, however, is never the center of the story. Instead, it's part of things, a normal, omnipresent element. Here's a taste of Kingdom Cons that feels like a surreal narrative filtered through a Tom Waits song:

Lobo felt envy, the bad kind first and the good kind after, because suddenly he saw that this was the most important day of his life. Never before had he been near one of those who gave life meaning, made it all tally up. Never even had the hope. Ever since his parents had brought him here from who knows where and then abandoned him to his fate, life had been a counting off of days of dust and sun.

I could go on and on about why you should read Herrera, but the reasons will become obvious as soon as you start one of his books. I encourage you to do so. You won't regret it.