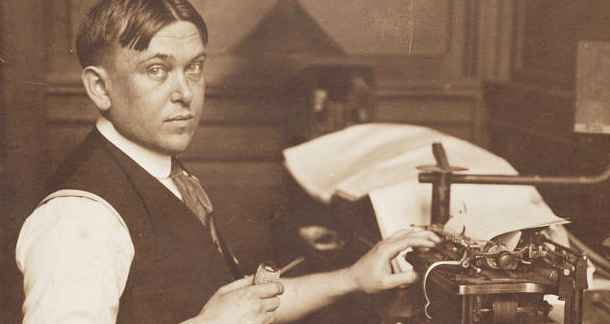 The eminent journalist H.L. Mencken was born 140 years ago this month, which makes it a good time to take a look back at his work. The fact that it is a presidential election year makes it all the better, since Mencken’s acerbic humor was so often directed at politics and presidents, and much of it shows that the complaints we have about our contemporary politicians aren’t anything new. And yet, a retrospective also forces us to ask how easily we’re swayed by exceptional prose and pithy sentiments, whether such sentences contain wisdom or are just very elegant sophistry. Mencken’s legacy in this regard, like so many other writers, is complicated.

Mencken spent the majority of his life in Baltimore, and most of his professional career writing columns for The Sun. He also co-founded The American Mercury, wrote one of the first books detailing the difference between British and American English, served as a consultant to Alfred Knopf, and covered the famous Scopes “Monkey” Trial. This list only shows the highlights of his career—at one point in the early 20th century he was arguably the most famous and influential journalist in America.

One reason his work remains suited to our contemporary environment of discourse is that it is easily memeable. Do a Google image search of “Mencken Quotes” and you will get a seemingly endless stream of one-liners to put on your Twitter page and apply to almost any socio-political viewpoint. Some of them seem prescient, even prophetic. For example, on elections he says:

Mencken’s acerbic humor was so often directed at politics and presidents, and much of it shows that the complaints we have about our contemporary politicians aren’t anything new.

“The winner will be whoever promises the most with the least probability of delivering anything.”

On democracy he said:

“Democracy is the theory that the common people know what they want, and deserve to get it good and hard.”

I could imagine either side in today’s caustic politic environment applying these lines to their opponents.

Certainly there is an element of amusement to sentences like these, and they are fun to trot out once in a while. The prose is as sharp as that of Twain or Churchill, which at the very least gives it the appearance of wisdom. A closer inspection of Mencken’s life and work, though, can make even the grumpiest, most cynical readers (a group in which I count myself) balk at their admiration for the Sage of Baltimore.

With Mencken’s writings, the quality is in the style more than the content. His prose is nothing short of magnificent. As the critic Jonathan Yardley said:

“The subjects of some of those essays may now be of little interest… but the magnificent prose with which Mencken addressed them has lost none of its freshness, its sparkle, its comedy. Reading that prose is one of the great joys that literacy bestows on the sentient.”

While that last sentence is a bit over the top—in a very Mencken-like way, which I am sure Yardley intended—there’s no doubt that it’s pleasing for anyone concerned with English prose style to read Mencken’s work. The man was a master of the language, and manipulated it to his ends in a way of such idiosyncratic quality that it’s almost inimitable.

Yet, as with any writing, there’s the style and the substance, that latter of which can give even a Mencken fan like me some pause. For example, a hundred years after Mencken’s heyday, knowing what we know about authoritarianism and how it manifested in the Soviet Union and many other places, it seems ignorant to criticize democracy as he does. Churchill’s quip on the subject holds up much better: “Democracy is the worst form of Government except for all those other forms that have been tried from time to time.” Mencken’s line is well-worded but negative towards democracy, whereas Churchill’s sentence is a clever way of portraying a truth most of us know about the democratic process, which is that with all its flaws it’s the best people have ever done. In 2020, I’d say we almost universally lean towards the latter. 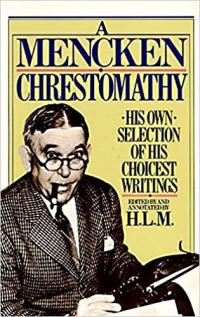 “I do not mean to argue, remember, that all politicians are villains in the sense that a burglar, a child-stealer, or a Darwinian are villains. Far from it. Many of them, and their private characters, are very charming persons, and I have known plenty that I’d trust with my diamonds, my daughter or my liberty, if I had any such things.”

The humor of comparing thieves to Darwinians remains today, as does the final line of hypothetically trusting politicians with things he does not have, the latter item clearly being yet another shot at those elected officials. Also note Mencken’s deft use of the rule of three in each of his lists. It’s all still funny and enjoyable, but while there’s a reasonable argument to be made that government is not the way to solve many real world problems, such an opinion doesn’t come through the overwhelmingly sardonic attitude of H.L. Mencken’s prose.

I don’t mean to say that Mencken’s writing is hollow, or has no value past its linguistic flare. Rather, many of his views either appear facile or simply don’t hold up over time—not the least of which are those on race and ethnicity—and the question with a writer like him is whether one can appreciate the excellent wordplay Mencken uses even when the substance doesn’t always come along with it.

This is a personal decision, to be sure, and I speak only for myself when I say that I continue to enjoy reading passages from Mencken even if I don’t do so in order to find the thoughts of a truly wise literary figure. For me, the prose is enough to keep me going, and again, it’s not like there’s nothing at all to his essays and articles. Politicians continue to often live down to their worst stereotypes, and the vox populi can, at times, earn the monicker that Mencken put on the general population, the “booboise.”

Affairs today are more complicated than cynicism—finely worded as it is may be—can capture by itself. I imagine a hundred years ago the situation was much the same. Grumpiness only achieves so much, and it’s no accident that Twain and Churchill, who had an equal prowess with the language and a streak of world-weariness themselves, hold up much better than Mencken. But that doesn’t mean you can’t enjoy the man’s work for what it is, and still take a little something from it.

Buy A Mencken Chrestomathy: His Own Selection of His Choicest Writing at Bookshop or Amazon

Need to pick up a client or a business partner? Hiring a driver from “Perfect Drive” is what will make your life easier and your guests comfortable. They will know how classy you are and what your standards are.

While I am not well acquainted with the views of Mencken, I have two thoughts after reading this article.

The first is on the use of the term "darwinists."  The implication from the article is that Mencken though those who believed in Darwin's theory of natural selection were akin to thieves or kidnappers.

However, given the time, he might have been referring to the "social darwinists."  This was a group guilty of the worse sort of scientism who believed Darwin's theory implied that might made right, that those who were successful were evolutionary superior, and promoted the sterilization of supposed "inferior" races and classes.  (Of course none of this is actually supported by Darwin's theory, it's a political view based on a misunderstanding of Darwin's work.)

The other thing I take some issue with is the idea that the stated criticisms of democracy are necessarily by themselves to be taken as support for authoritarianism.  Context is important, and such a statement is needs to be understood in regards to what the author's views were, what he was discussing, and what he would expect of readers at the time.

While the famous Franklin quote on democracy can't be sourced, somewhat similar statements were made by Adams and Jefferson.

In the context, they were not arguing for pure authoritarianism (although of course one can debate what their actual views meant.)  They were particularly wary of the recent example of the French revolution, and were arguing for moderation from "pure" democracy.  This was during the debates over the government that would replace the articles of confederation. They both wanted a democratic republic, where the will of the people is represented through voting but where there are safeguards for the rights of the minority from the "tyranny of the masses."

Granted, Adams in particular wanted as formal aristocracy, but...

The point is, one can't assume that criticism of something necessarily means support of it's perceived opposite.  Nowadays, many use the term "democracy" as shorthand for "modern western type semi-liberal nation state."  This wasn't always the case.  It's also possible that readers of Mencken may have understood his criticisms to not be a fundamental endorsement of other political systems. As I said, I don't know much about Mencken's views, but it's important to understand them in the context of the time as opposed to what they may imply today.

As a brief example I often see of this type of fallacy, it is common for people to assume someone criticizing capitalism is thus supporting authoritarian communism of the marxist-leninist variety, or respond to such criticisms by criticizing said communism.  This is a fallacy of the fale dichotomy, where two world views or modes of thought are seen to be the only options.  We see this today with modern partisan politics, where any criticism of any aspect of either "left" or "right" current partisan ideology is taken to be complete support for the extreme views of the other side.