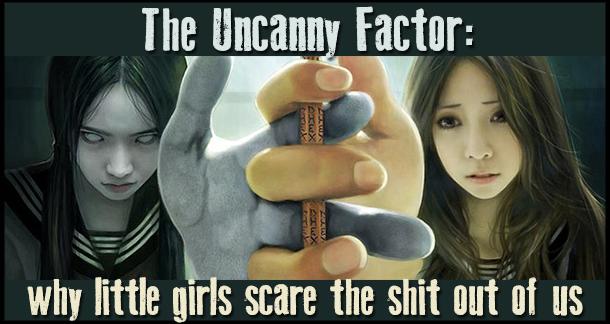 Many of the common human fears have reasonable explanations. Snakes and spiders have venom we'd do better to avoid, heights can lead to the accidental (and temporary) ability to fly, killers tend to kill people, and so on. But of all our dread fascinations in recent years, one common trope seems especially peculiar: The creepy little girl.

Why is it that little girls scare the shit out of us? It boils down to the uncanny factor.

The Rise of the Creepy Little Girl

While the trope may be in vogue, it's certainly not a recent invention.

If you've missed the trend toward creepy little girls (CLG), you clearly haven't been watching many horror movies. To name just a few of the films to use this trope, we have The Ring, Polotergeist, The Exorcist, Silent Hill, The Shining, Interview with a Vampire, Nightmare on Elm Street, The Orphanage, Let the Right One In, 30 Days of Night, The Last Exorcism, Night of the Living Dead, and The Grudge—and that doesn't even touch on the appearance of the CLG in other mediums: books like The Midwich Cuckoos, The Bad Seed, Pet Semetary, and House of Leaves; the F.E.A.R. and Bioshock video game series; countless manga and anime series; these terrifying ads; my favorite meme; and more.

It's certainly true that the CLG has been used heavily in the past few decades and even more in the past few years. Stephen King has used the trope more than once, and the CLG's role in The Shining and Pet Semetary may have led to copy-cat novelists and screenwriters. Further, the repeated popular representation of the CLG may super-charge the effectiveness of creepy kids (for reasons that I'll go into momentarily). But to say that the CLG is a phenomena of recent years would be inaccurate.

The 1898 novella "The Turn of the Screw" by Henry James features a pair of creepy children, an old Scottish tale gives a homicidal little girl the name of "White Death," Macbeth has ghost children repeating "despair and die," and so on. While the trope may be in vogue, it's certainly not a recent invention, nor can its effectiveness be explained solely through its recent usage.

A Brief History of the Uncanny

Little girls aren't scary: They're terrifying. Here I'm using the Stephen King definitions of the three types of fear. King says we have the "gross-out" (that which disgusts us), "horror" (the unnatural, which threatens us directly), and "terror" (which is a sort of threat without threat). King elaborates by saying:

Terror [is] when you come home and notice everything you own had been taken away and replaced by an exact substitute. It's when the lights go out and you feel something behind you, you hear it, you feel its breath against your ear, but when you turn around, there's nothing there.

But King is certainly not the first to discuss this sort of fear. It's quite easy to tie his definition of terror into Sigmund Freud's "uncanny." Of course, "uncanny" isn't a particularly good translation. What Freud originally discussed was "heimlich" and "unheimlich," which can translate to "secretly" and "creepy" if we're willing to indulge in oversimplication. But the full definitions are worth looking at: "Heimlich" means belonging to the home (related to that which is private, intimate, and familiar) while "unheimlich" means that which doesn't belong—or, more accurately, that which seems like it should belong but does not.

Unheimlich was originally brought into the broader cultural dialogue by Ernst Jentsch more than a decade before Freud's famous essay on the topic. Jentsch called unheimlich an "intellectual uncertainty; so that the unheimlich would always, as it were, be something one does not know one’s way about in." But Freud's elaboration (which has been translated as "uncanny") shows that it is more than merely something one doesn't know one's way about in. Rather, the Freudian "uncanny" is the unfamiliar familiar. It is coming to our home and finding that it now holds secrets from us. It is not merely finding something strange: It is finding that we have become the stranger.

Falling into the Uncanny Valley

One of the popular uses of the term "uncanny" comes from the "uncanny valley" hypothesis offered by aesthetic theorists. The idea is fairly simple: That which looks entirely human can be attractive to us and that which looks entirely unhuman can seem threatening or fascinating. However, between the familiar and the unfamiliar lies the uncanny valley.

Take this side-by-side demonstration or these smiling examples. The basic conclusion is simple: We have a great degree of tolerance for that which isn't human so long as we can identify what makes it non-human. But when something is just a little too familiar ... when it's like us, but not quite ... we get caught up on that "not quite." This is where Freud's uncanny and King's terror take place. It is the space where our minds don't know whether to connect with or run away from what we see.

CLGs: The Perfect Source for the Uncanny

The vulnerability of the little girl makes us more willing to be vulnerable ourselves.

There are many ways to access the uncanny valley, but little girls provide an especially effective path. Why? Because people are not merely themselves: We are also all the things we represent, and our culture—and perhaps even our genetics—assigns various meanings to the signifiers we carry. Little girls signify a non-threatening vulnerability.

It's honestly hard to say whether it's our evolutionary heritage or our cultural standards that leads us to feel so protective and nurturing toward little girls, but the desire to take care of them certainly seems to be the immediate instinct. Even when the young girl is not familiar to us, we have a sense of familiarity with what she represents—and the vulnerability of the little girl makes us more willing to be vulnerable ourselves.

If a little girl comes at us swinging an axe, it's strange and frightening, but not nearly as frightening as encountering a little girl where something we can't place is simply "not quite right." The terror of this situation is strong because our instinct to nurture and protect and leave ourselves vulnerable is called into question; we sense that the things we thought we knew have become secret to us. As the little girls become increasingly creepy, we trust ourselves less and less, but our desire to nurture and our sense of connection with the little girl isn't fully disrupted until it's too late.

It's an effective way to mess with our mental and emotional systems, and it's for that reason that more than one of my top picks for creepiest story include this terrifying trope.

I have heard it said that fantasy stories are powerful, not because they offer an escape from the everyday world in the form of a story, but because the story transforms our everyday world. Each dead-end corridor becomes a passageway into Diagon Alley, we try to use the force to levitate books across the room, and we imagine Gandalf showing up at our door for an unexpected journey.

CLGs can be terrifying and spine-tingling while we're exposed to them, but I believe they gain much of their power through this same transformation of our everyday world. It is not so much that we mistrust the creepy girl on the screen or in the pages of the story. Rather, it's that we come to mistrust our own instincts. We don't merely think the story is strange: We feel a cognitive dissonance so powerful that it shakes our certainty about the world around us, making us strangers to ourselves.

Every little girl we meet becomes a potential Esther, Samara, Leah, Alessa, Karen Cooper, or Rhoda Penmark. More importantly, the vulnerability and protectiveness we feel toward them becomes unsettling. Eventually we may shake off the uncanny fear that's worked into our bones, reminding ourselves that it was only fiction. But, for a while, the terror lingers inside us. When we connect, sympathize, and leave ourselves vulnerable, we are forced to ask ourselves, "Am I really sure that I'm safe?" And we can't help but reply, "Not quite...."

[The brilliant and frightening image used in the header comes courtesy of the artist Dexter Tinagan.]

Great read!
Really brings light into the dark (room with CLG's in it)!

It sure is a nice piece to read. But so many links give 403's or do not exist anymore!

Thank you for the addition, of 'unheimlich', to my vocabulary!

Japanese writer Haruki Murakami has a nice plethora of ghostly girls in his novels. They are not terrifying or horror movie style, just spooky, smart ass girls you think, for some reason, they might be dead.

Awesome article. It's good to know I'm not alone. What are your sources for the heimlich and uncanny valley? See that? I'm interested in reading more, that's an effective article.

A little too dramatic examination of something fairly easy: what is familiar to us and suddenly presents itself with another appearance (specially children who are generically considered something pure and honest, who in this case turn into something creepy and dark) will make us feel uncomfortable.

Very cool piece. I just wrote a piece about The Exorcist and posited that the vulgarities would have been shocking to a 1970s audience when spoken by an adult, but became terrifying when spoken by a child (especially since the make up was done so that no matter how horrible Regan looked, you still saw the face of a child coming through) -- I think that has a lot to do with what you are describing here. I had never heard that King quote about terror before, either, so I count this as a win.