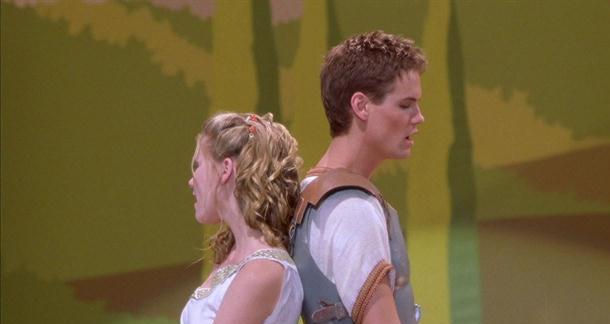 Shakespeare adaptations have been a significant fixture in cinema since its beginning, the first coming into being as early as 1899 with King John. Types of adaptations range from straight forward versions, complete with Shakespeare’s lines and settings, to modern retellings in new, unexpected locations, to mixtures of the two, like Baz Luhrmann’s William Shakespeare’s Romeo + Juliet (1996). Perhaps one of the most exciting venues for Shakespeare on film is the musical genre, featuring classics like West Side Story (1961, Romeo and Juliet) and Kiss Me Kate (1953, The Taming of the Shrew). Here are nine films that aren’t necessarily known for being Shakespearean. I’ve avoided any Romeo and Juliet adaptations; while there are numerous options, ranging from Romeo Must Die (2000) to Warm Bodies (2013) to Gnomeo and Juliet (2011), Romeo and Juliet adaptations tend to be fairly straightforward and easy to spot. 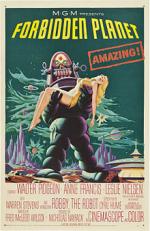 This classic science fiction film sticks quite close to the plot of Shakespeare’s play. Dr. Morbius, a brilliant philologist, steps into the role of Shakespeare’s Prospero, stranded with his daughter on the planet Altair IV for 19 years before a flight crew comes to rescue them. Morbius’ daughter, Altaira, is a carbon copy of Shakespeare’s Miranda: beautiful, educated, naïve, and often controlled by the men around her. She eventually becomes involved with the commander of the flight crew, also known as Shakespeare’s Ferdinand. One of the most endearing characters, however, comes in the form of Robby the Robot. Created by Morbius to be completely obedient to him while still having a sense of morality, Robby the Robot serves as the Ariel character in the film and became an extremely popular figure in science fiction. The Id monster, created by the home species of Altair IV, the Krell, springs into being from people’s subconscious fears and in a way, serves as the Caliban character in this adaptation. The film repurposes The Tempest in a fairly straightforward way, adapting the plot and characters into an entertaining and classic science fiction film. The film is worth watching for the special effects and Robby the Robot alone. 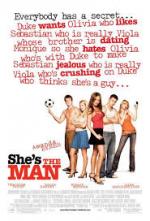 She’s the Man features Amanda Bynes and Channing Tatum in a rather entertaining retelling of the Twelfth Night. The main character, Viola, pretends to be her twin brother, Sebastian, so he can go off to England to play music and she can play for the school’s boy’s soccer team, since her school’s girl’s team was cut. In true Shakespearean fashion, there’s cross-dressing, mistaken identity, and complicated love triangles, all of which lead to a feel-good ending. While most teen Shakespeare adaptations feature the actual play in some form, generally in the classroom or on the stage, She’s the Man strictly sticks to retelling the play, even keeping the majority of the character and location names in tact. Many critics deemed the comedy predictable and too slapstick and while there are certainly silly moments, the film was a hit with teen audiences and Amanda Bynes shines. 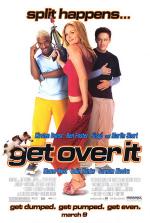 For those that have seen Get Over It, it probably comes as no surprise that the film is loosely based off of A Midsummer Night’s Dream. The film follows Berke as he tries to win back his girlfriend, Allison, from her new suitor, Striker, by auditioning for the school musical with them. The musical, directed by Martin Short’s character, is a campy version of a Midsummer Night’s Dream. In order to understand the dialogue, Berke enlists the help of his best friend’s sister, Kelly, and what ensues is a hilarious love square between Berke, Allison, Striker, and Kelly. While this adaptation focuses only on the lovers’ plotline of a Midsummer Night’s Dream, it is frequently charming and Martin Short is hilarious, as usual. The film is worth a viewing if only to watch the early 2000s glory that is its cast: Ben Foster, Kirsten Dunst, Shane West, Mila Kunia, Sisqó, Zoe Saldana, Carmen Electra, Vitamin C, and Martin Short. 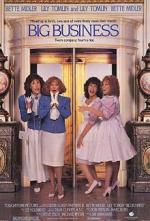 A Comedy of Errors can be uproariously funny when done properly and Big Business achieves just that. Bette Midler and Lily Tomlin are a dream team as two sets of twins, both named Sadie and Rose. The story begins in small town West Virginia; two couples give birth to twins at a company owned hospital, but of course the twins get mixed up and, miraculously, end up with the same first names. One set of twins grow up wealthy and eventually inherit their father’s business, which happens to own a company in the small town where the other set of twins live. When the small town twins come to New York City to protest the selling of their town’s beloved company, what ensues is a hilarious mix up in the Plaza hotel, complete with relationship hijinks, mistaken identities, yodeling, and even a preteen Seth Green. As far as Shakespearean comedies go, Big Business excels. I’ll watch Bette Midler and Lily Tomlin take on the Bard any day. 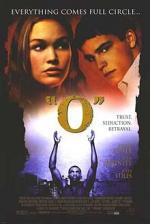 Admittedly, “O” is a fairly obvious Othello adaptation, from the updated versions of the original names (O and Desy for example), to the classroom focus on the play throughout the film. In this teen Shakespeare version of Othello, O (Mekhi Phifer) is a star basketball player at a private school and is, of course, dating the dean’s daughter, Desi (Julia Stiles). His best friend comes in the form of Hugo (Josh Hartnett), who takes up the role of one of Shakespeare’s greatest villains, Iago. The film was originally slated to open in 1999 but due to the school shooting in the film, was postponed after the tragedy at Columbine.  While the film does have some pacing issues, it remains one of the most affecting Shakespeare adaptations because it covers issues such as sexual violence, school shootings, and how the media chooses to cover tragic events, which are all still relevant in 2015 and, sadly, will probably continue to be in the future. 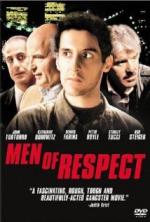 Men of Respect gives Macbeth a mob war makeover. John Turturro plays Mike Battaglia, our New Yorker Macbeth, a hit man who is convinced to take out his boss after he doesn’t get the respect he and his wife feel he deserves. The film itself isn’t a particularly special addition to the mob genre, but the women of the film make it worth a viewing. Lady Macbeth materializes in the form of Ruthie Battaglia (Katherine Borowitz): a driven, ruthless woman with a sharp wit who has one of the best lines in the film: “It’s that prick’s blood. I should dye my hair with it.” Perhaps the most original aspect of the film comes in the form of the three witches, translated into a mystic seer and her two partners who collect money for her services. Their scenes capture the eerie, anxious quality that makes Macbeth so affecting and are some of the most interesting in the film. 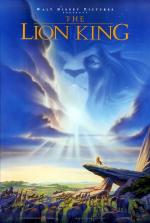 Disney hasn’t explicitly stated that this classic is based off of Hamlet but moviegoers and academics alike have been making the connection since the film’s release and it’s easy to see why. Scar is a captivating villain, Timon and Pumba inhabit the loveable sidekick role perfectly (luckily without a morbid ending), and Simba is suitably angst-ridden. However, there is also a case to be made for the Lion King as a Richard III adaptation. If Scar is taken as the main character instead of Simba, he becomes the charismatic and manipulative Richard III, who murders his brother for the crown, marries his sister-in-law, and attempts to murder his nephew. Regardless of which play the film is adapting, the Lion King is clearly Shakespearean in nature and will remain a Disney classic for decades to come. 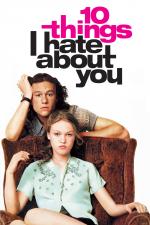 10 Things I Hate About You is one of the more obvious films on this list but because it’s such an iconic 90s teen film and seamlessly adapts not only The Taming of the Shrew but also the figure of Shakespeare into the plot, it gets a spot. Julia Stiles plays Kat, the chick rock loving badass who seems to be the opposite of her sister, Bianca (Larisa Oleynik), a teenage girl who, while equally badass, is more preoccupied with the prom and boys. Their hilariously protective father (Larry Miller) insists that Bianca cannot date until Kat does as well, thinking that will give him peace of mind for years to come. In order to date Bianca, Cameron (Joseph Gordon-Levitt) conspires to get someone to date Kat the Shrew and finds a savior in Patrick (Heath Ledger) and a backer in Joey (Andrew Keegan), a jock who also wants to be with Bianca as well. One of the reasons the film is such a brilliant Shakespeare adaptation is because it doesn’t shy away from playing with the Bard, from featuring Shakespeare superfan Mandella (Susan May Pratt), to Mr. Morgan (Daryl Mitchell) rapping Sonnet 141 in class. In general, the film’s willingness to be outrageous is what makes it so successful, from a wildly inappropriate guidance counselor (Allison Janney) to Kat flashing her teacher and even a Four Seasons serenade featuring the school band. As far as Shakespearean adaptations go, 10 Things I Hate About You successfully updates The Taming of the Shrew and delivers a feel good, often hilarious film you can watch again and again. 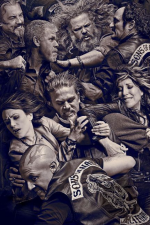 The hit FX TV show follows Jax Teller, his family, and their involvement with the Sons of Anarchy Motorcycle Club, Redwood Original (SAMCRO). While the show doesn’t follow the plot of the play exactly, the creators have stated that the intent was consciously there and the play's influence can be seen throughout the series. The issue with Hamlet adaptations is that the play has been adapted countless times on stage, film and TV: however, the series is addictive, engrossing, and original, resulting in one of the most interesting versions of Hamlet in years.

The number of Shakespeare adaptations out there is ever growing, ranging from teen comedies to period pieces to musicals to samurai films — there really are no boundaries when it comes to adapting Shakespeare. In addition to full adaptations, there are many films that only feature aspects or characters from the Bard’s plays. Like many teen Shakespeare films, Never Been Kissed (1999) uses Shakespeare in the classroom and mirrors aspects of the plot throughout the film, including having the main character and her prom date dress up as Rosalind and Orlando from As You Like It. The dark comedy Jawbreaker (1999) features Macbeth in the classroom and at times the three main characters embody a high school version of the witches and their ringleader, Courtney (Rose McGowen), often dons the mask of Lady Macbeth throughout the film. Whether they’re explicit or subtle adaptations, Shakespeare and film will undoubtedly continue to enjoy a long and fruitful relationship.
Now, go forth and explore some modern B. Shakes! 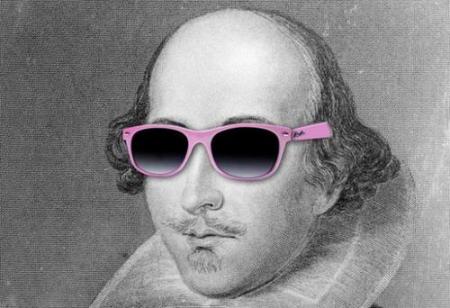