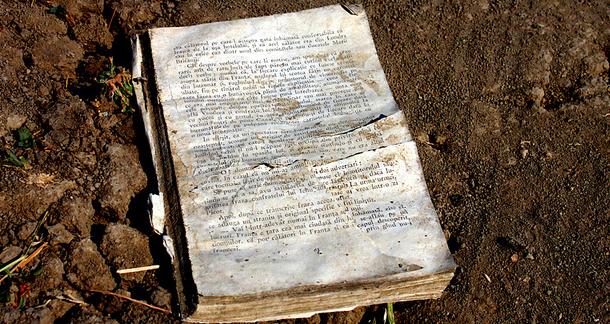 Most prolific readers have been in a position at some point in their lives when getting rid of a few books becomes necessary. It’s an unpleasant prospect, so you stave off the inevitable by tossing clothes, knickknacks, even furniture, but eventually there’s no getting around it: that box of dog-eared mystery novels that you picked up at a yard sale has got to go.

When the day comes, you could just dump those books into a charity bin, but that’s rather cold, isn’t it? Let’s say you’re the sort who likes to make sure your dejected books go to a good home. You and those pages bonded, after all, yet they’re not worth the price of shipping on Amazon. But the internet is a vast and mysterious place, so isn’t there a better service out there somewhere for getting rid of used books? It was this exact line of thought that lead me to investigate several book trading websites. Eventually, I arrived at one of the largest, BookMooch.com.

BookMooch.com was founded in 2006 by programmer John Buckman. The idea at its core is that each book you post to your account for trading is worth one tenth of a point. When you actually ship a book, you get another full point. Books that you send to international users are worth a whopping three points. When you’ve answered enough requests for trade, you’ll be able to request a book be sent to you. Users have the option of declining a book request with no penalty, or deferring when they want to ship it until later.

First, I’ll begin with the things about BookMooch that I liked and drew me to the website in the first place. There’s something incredibly cool about services that rely solely on trust. Coachsurfing.com gets me in exactly the same way. I guess it’s just nice to believe that humanity has reached an elevated enough state for people to say, hey, I’m going to trade you this in exchange for that—and then actually do it. There is no currency involved in BookMooch other than “points.” The homepage claims that all revenue from the site is generated by advertisements.

But what really interested me about BookMooch, leading me to try it instead of several similar services, is that there’s an option for donating your points towards charities, so that they can in turn request books. Mixed with the incentive of receiving a few books back, it seemed like a really nice touch.

The biggest problem that I encountered with BookMooch is actually the thing I liked most about it: it’s a system that relies solely on trust. The site’s “About” page acknowledges that a certain number of books marked “lost in the mail” may result in the deactivation of a user’s account, but it seems there is nothing wrong with never replying to a request at all. Upon setting up my account, I posted the books I wanted to trade and then, after I’d packaged and shipped a few of them, I began making requests myself. (If I didn’t make this clear before, you can request books from any user on the site—not just the ones that “mooch” from you). And I ended up waiting…and waiting…and waiting. Finally, after about two weeks, one user replied to say that she had since lost the book that I requested.

“That’s all right,” I promptly wrote back. “Not your fault. Thanks for letting me know.”

To this day, I have not received a single book that I requested. Admittedly, however, my activity on the site pretty much came to an end after those first half-dozen books failed to generate a response. Maybe if I had continued sending out my own books, eventually karma would have kicked in and I would’ve found someone willing to send one back to me as well.

An additional problem that seems to derive partly from the first is that, because there’s not a lot of incentive for people to give away books they actually like, you’ll find a lot of The Da Vinci Code and Memoirs of a Geisha. Not to imply that there’s anything wrong with those books, but if your taste deviates much from the bestsellers of six years ago, you may be out of luck. It could be that BookMooch has already hit its stride, and if the statistics the site itself provides are any indication, fewer and fewer people are using the service. The number of “mooches” hit a peak in 2009-2010, only to slowly plummet over the past three years.

Everything said, if you’re an open-hearted, selfless type (I’m not), and you’re in this just for the sake of spreading the joys of reading without receiving anything in return, this may still be the site for you. But at the end of my experiment with BookMooch, I found myself wishing I’d just closed my eyes and dumped my books into that charity bin and saved the cost of shipping them.

In an interview posted on the site, founder John Buckman explains his original intent:

“BookMooch is like a giant bookstore, of all the bookshelves in people's homes. By aggregating everyone's home book collection, we should have the best selection of used books on the planet.”

It’s a spectacular idea, and my experience is all the more maddening for its potential.

But there’s more out there than just BookMooch, and although I won’t go as far into depth about it, I have had a better experience with BookCrossing.com, possibly because it doesn’t set up so much expectation, and also because I like the spontaneity of it. BookCrossing is a bit like the literary version of the money tracking website, wheresgeorge.com. Each book you register gets a tracking number. Before you “release” a book to the wild, you write a brief description of the place where you’re leaving it. The site will send an email alert when there’s a released book in your area, and then you can go and hunt for it. Which is kind of fun, at least to me (It’s like Easter with books!). A bit more modernized than BookMooch, it also allows for synchronization with your Goodreads account.

Or, if you’re still struggling with what to do with those used books, you could at the very least always use them as a classy way to store your liquor.

The Blagger's Guide to Franz Kafka

Seems like an opportunity here to learn something about services that rely solely on trust.

Tymber Dalton from Dagnabbit, Florida! is reading Saint by Sierra Simone August 9, 2013 - 6:21am

Paperbackswap.com has been around for years, and has a much better points system. We've been using them for a long time, and maybe 1 out of every 100 books we've swapped has gotten lost (to or from us). They also do CDs.

Tymber, thanks for the recommendation. I'll have to give them a try next, since I still have a lot of old books sitting around.

Joshua Chaplinsky from New York is reading a lot more during the quarantine August 11, 2013 - 8:43am

I, too, feel Bookmooch may have already hit its stride and is on the "back nine" as it were. I have a rather large wishlist on the site, but it's been a long time since I've been notified of any of them becoming available. I think Leah is right in that there are a lot of copies of the same shitty book floating around out there.

But overall I'd say my Bookmooch experience has been good to great over the years. I've given away almost 100 books, and received about 90 in return. Not a bad average. And even though the well seems to have dried up, I scored some great, hard to find titles, such as Throat Sprockets by Tim Lucas, an eXistenZ novelization, a copy of Story magazine featuring Chuck Palahniuk's "Project Mayhem" short story, and The Autobiography of F.B.I. Special Agent Dale Cooper: My Life, My Tapes. I've also scored novels by the likes of Don DeLillo, Douglas Coupland, David Mitchell, Margaret Atwood, Bret Easton Ellis, James Ellroy and Hubert Selby Jr. Those were the days.