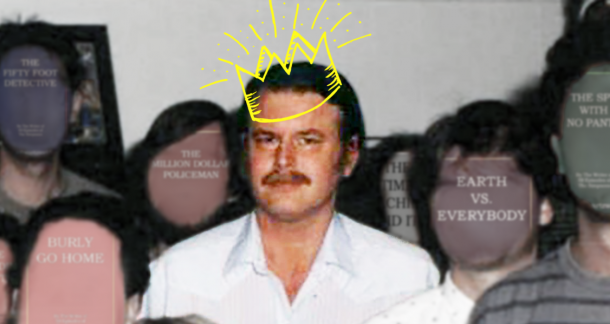 For the first time in...maybe ever, John Swartzwelder gave an interview.

Who’s John Swartzwelder? Even if you’re not sure who he is, you’ve been touched by his work. If you’ve ever heard the phrase: “Alcohol: The cause of, and solution to, all of life’s problems,” I’m talking about the dude who wrote that. If you have an opinion on the “good” era of The Simpsons, you’re almost certainly talking about the Swartzwelder era. If you’ve ever read a detective novel that begins with: “As my exciting story opens, I am being punched in the stomach,” then you’ve read one of Swartzwelder’s hilarious books, and I’m a little concerned that you don’t remember who he is. You should get checked out.

In the interview, Swartzwelder debunks several long-held theories about himself. Yes, he did have a diner booth installed in his kitchen for writing, but no, it wasn’t the actual booth he often occupied in an actual diner. Yes, he did negotiate his contract so he didn’t have to go into the office every day, but no, it wasn’t just because he wanted to smoke.

Frankly, I don’t recommend the profile. It mostly de-mythologizes a living legend, and how is that fun? I hate it when some clever fucker uses science and logic and FACTS to make the world less fun, like when a scientist demonstrates that glitter is bad for the environment. So you’re telling me that fun is responsible for climate change? Well...I guess I’ll need to buy a skimpier set of swim trunks, then, because you can pry my glitter out of my cold dead hands. And vacuum it out of my cold, dead carpet.

There is one super useful part of John Swartzwelder’s interview, however, where he lays out his writing method. I call it: The Swartzwelder Method.

Swartzwelder’s method is to bang out a draft that he knows is horrible, all in one go, if possible. Then, he comes back and edits it the next day.

It’s like a crappy little elf has snuck into my office and badly done all my work for me, and then left with a tip of his crappy hat.

These crappy drafts include stand-in dialog, maybe a stage direction with no joke. It’s mostly made up of all the boring parts of typing out a story so that way, the next day, it’s an empty vessel just waiting to be filled with funny.

As Swartzwelder puts it:

I’ve taken a very hard job, writing, and turned it into an easy one, rewriting, overnight.

Me: “There are two kinds of writers.”
Oprah: “Care to elaborate?”
Me: “Oh, uh, I guess not. I’m not really sure what the two kinds are. Just pretty sure that two is the number.”

You’ll see writers put into two categories: Swoopers and Bashers. Swoopers sweep through a draft fast and fix it later. Bashers go painstakingly sentence-by-sentence, making everything perfect as they go.

I don’t respect bashers. Get out of here with that shit.

The Swartzwelder Method probably speaks to swoopers already, so it’s a soft sell. I do want to highlight a key difference, though: Save the fun for your second, third, and however many passes. Give yourself something to look forward to beyond that first, wild ride.

I don’t respect bashers. Get out of here with that shit.

Bashers have a reputation for being exacting, putting everything in its place. They look down on swoopers for being anarchists on the page, and this is incorrect. A swooper is also very exacting, they just do the more exacting work in subsequent passes instead of right off. Compare it to woodworking. You can say you’re being efficient and exact by taking one thorough pass with a sander, but you’re really doing a better job if you start with a coarse grit pass, then go medium, then fine. A thorough job done once might not always yield better results than a sloppier job done three times. Cited Source: My masturbation journal.

Plotters and Pantsers is another way to divide writers into two groups. Plotters plot out the entire story first, Pantsers go by the seat of the pants and figure out the story as they go.

You can use The Swartzwelder Method as either a plotter OR a pantser. Because the Method isn’t about plot or not. It’s a way to deal with the sad, stupid fact of life that says you can have a great idea for a novel, you can even have great lines in your head, but at some point you have to apply ass to chair and get it in print. If we could just beam the idea of the story straight into people's heads, we’d do it that way, but unfortunately we’re still tied into these narrative options of books and movies that don’t let you just share the idea of a story and make it meaningful, you have to give it shape.

The Swartzwelder Method might help you break out of feeling like that writing part is such a drag. You do that boring, tedious work of cramming all the basics onto the page as fast as you can, and then you get to go back and add explosions and butts and time travel and non-chicken-type dinosaurs.

One of the things that speaks to me about the Swartzwelder Method is that it’s similar to something said by Tom Spanbauer. I respect both of these men deeply, and they are very different artists.

When It Breaks Down

There are some situations where I might not recommend the Swartzwelder Method, or when I’d recommend a modification.

If you’re on part 6 of an epic fantasy series, so you know the characters and the plot and where this is all going, the Swartzwelder Method might be a mistake. You need to make sure you’re keeping everything engaging and fresh, and I think banging it out fast might make it easy to just maintain the exact tone and structure and plot of the previous books, kind of go on auto-pilot, and call it good enough.

If you’re teaming up for something like a work document, I’d skip it. I mean, I’d skip the method because it’ll look confusing and scary to everyone who isn’t you, but I’d also skip the work document. Write like three good jokes instead. The world doesn’t need another work document.

Sometimes you need a little section of a story to get you to where you really want to be, but once the story is complete, you can take that scaffolding away. When you go Swartzwelder, it’s easier to quickly trash those scaffolding pieces. You don’t fall in love with these unnecessary scenes the way you do when you spend a lot of time with them.

It’s great for papers you have to write for school. Seriously. It’s MUCH easier to go back and fix everything once you’ve got the roadmap laid out. Bonus, if you screw up and don’t get everything fixed, you at least have SOMETHING to turn in, and who knows, maybe the teacher will just skim it, see that it looks decently long, and give you a B-. Which is more than you deserve.

What I love about the method is that there’s an emphasis on fun. Remember when writing was fun? If there was a way to make it fun again, wouldn’t you at least give it a shot?

Typical novel-writing methods mostly front-load the fun. You have fun swooping through a draft or plotting it out or whatever, then you’re stuck cranking at the keyboard to bring it to life. Front-load the boring, stupid part, and save the fun for last.

I mean, when have you ever tried to write in a system that's based on making it fun? Where that's the whole idea? Who even knew such a thing existed?

Maybe I should let Swartzwelder sum it up:

I was sleeping like a baby — waking up every three hours screaming and crapping my pants.

Okay, that has nothing to do with his writing method. Just, damn, his books are funny. You have to read them.

Get The Spy With No Pants at Amazon

Get The Squirrel Who Saved Practically Everybody at Amazon

John Swartzwelder Is The Funniest Writer You're Not Reading