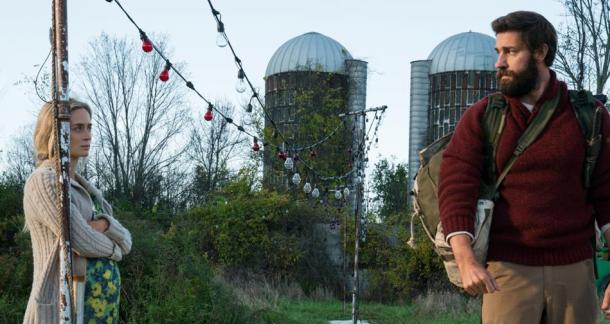 As writers, we're often offered sage advice like "write what you know" or "show, don't tell."

What we're not often offered are examples of what this looks like in practice. I saw a great example recently, and as it's been on my mind, I'm excited to share it with you. But please beware: there be spoilers ahead.

An Example: Starting with Common Tropes

I saw the movie A Quiet Place a couple weeks ago. I enjoy a good horror flick, and I loved this one a lot. However, as it got started, I often found myself annoyed with writer/director/leading man John Krasinski for the casual way in which he allowed his characters to fall into traditional gender roles.

First: a brief synopsis. The world has been turned upside down by blind, violent creatures who hunt their prey using their highly developed auditory sense. They find any destroy anything that makes a sound, be it a suicidal old man calling them to him, a raccoon skittering through the night, or a lamp dropped in a basement.

If you want your story to be bigger, make sure you turn that stereotype upside down.

An unnamed family is surviving in silence. They walk on trails of sand. They speak in sign language (a fact made more plausible by their hearing-impaired daughter). They cannot make a sound if they want to survive.

Here's where the tropes come into play. The father (Krasinski) is the Steve McQueen type. The hunter and protector. The man obsessed with strength and savvy. We see him try and fail to save his youngest child from the monsters, and we see him use that failure as motivation: he will not fail again.

The mother (Emily Blunt) is the family caretaker. She gives her son medicine when he's ill. After the loss of her youngest child, she is once again pregnant, despite the inherent risks of bringing a baby into a world of silence. Through much of  the film, we see the mother, quite literally, barefoot and pregnant, cooking and hanging laundry in the yard. Her flowy dress and the white sheets blowing in the breeze are the picture of the peaceful, forbearing mother. She's Olivia de Havilland's Melanie Wilkes in Gone with the Wind. Nothing more, nothing less.

The children, too, are being raised into these stereotypical roles. The son is taken hunting with the father; the daughter is expected to stay home and take care of her pregnant mother. They are a 1950s nuclear family, in a future world that cannot sustain them.

Turning the Tropes Upside Down

As in most apocalyptic horror movies, at some point, everything goes to shit. Isn't that how it always happens? The 1950s family cannot be sustained, and all hell breaks loose.

The how and why doesn't matter. Suffice to say, a baby cannot be born in silence. Creatures cannot be held at bay forever. There will always be a tipping point, and when that point is reached, something has to change.

In this movie, not only does the family's situation have to change, but so do their roles. Because let's face it: none of us are the tropes life expects from us, and all of us must go through life with the ability to change...or else we'll be lost forever.

In A Quiet Place, we start to see a shift in the mother first, for in addition to being a caretaker, she's also a bad-ass. How else can one explain giving birth on one's own in a bathtub and living to tell the tale? She keeps herself and her baby quiet enough, long enough, to survive.

The father, however, stays true to his Steve McQueen role, and in the end, it kills him. He doesn't ask for help. Doesn't learn. He is blunt force, a weapon only, and while that worked for McQueen in the 1950s, for John Krasinski's character, it's his downfall. In the end, unable to barrel through any more issues, he can only sacrifice himself to save his children. Steve McQueen to the end, but his end is the trope's biggest upheaval. The hero of the story dies.

It's the characters who can change who survive in this story. In the end we see the daughter, taught to stay home and take care of the mother, find a way to destroy the creatures. We see the mother, barefoot and pregnant no longer, holding a shotgun, going out to hunt and destroy. And we see the boy child allowed to be a caretaker, clutching his newborn baby brother while his mother and big sister take care of business.

This was the beauty of A Quiet Place: a final tableaux of a family altered, of roles reversed, and of a world about to change. Krasinski knew what he was doing when writing this script. He took a common trope — a nuclear family — and made sure that by the end, it was destroyed. He turned everything upside down, leaving us with a picture not only of female empowerment, but of an "other" way to be.

So when you next sit down to write, remember this: you can pick a stereotype and run with it, but if you want your story to be bigger, make sure you turn that stereotype upside down. You'll have more fun writing it, anyway.

Castration Anxiety and the Monstrous-Feminine in 'Thor: Ragnarok'

Yes! It's why I particularly loved the ending--the perfect place to end a story: where a new one can begin, refreshed and reloaded, scrubbed of its earlier ideals.