The Strange Death of Eugene Izzi 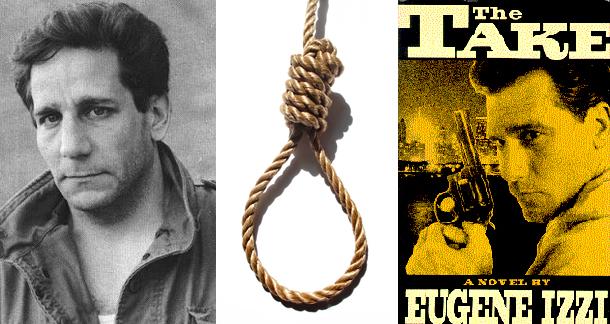 On December 7th, 1996, crime author Eugene Izzi was discovered hanging fourteen stories above Michigan Avenue in Chicago, Illinois. One end of the rope was tied around his neck, and the other end was connected to his desk in his office. It appeared to be a suicide upon first glance, but investigators started to suspect foul play once they realized Izzi was wearing a bulletproof vest. In addition to the vest, he was also found with $481 in cash, brass knuckles, a can of disabling chemical spray, notes documenting recent threatening phone calls, and three computer disks containing his newest novel. Inside his office, on the floor, police found a fully loaded, unused .38 caliber pistol.

Not exactly a typical suicide by any stretch of the imagination.

But let’s back up a minute. Maybe you’re not familiar with Eugene Izzi. That’s okay. I wasn’t either until a few weeks ago.

Eugene Izzi was born on March 23, 1953. He was raised on the southeast side of Chicago by an alcoholic father who was in and out of prison for various crimes. In his teenage years, Izzi dropped out of high school and enlisted in the army. While serving, he managed to earn a high school equivalency degree. He would also begin writing during this time.

Not exactly a typical suicide by any stretch of the imagination.

After he was discharged, Izzi returned home and immediately started working at the local Illinois steel mills. This blue-collar lifestyle would directly affect his future publications. Despite having a wife and children, Izzi spent the majority of his off-hours at the bar. Of course, this caused some tension in his household, and he very nearly lost his family. Add in the extra bonus of the steel mills periodically laying him off, and one might wonder how anybody could maintain their sanity.

Izzi, however, took these layoffs as a sign. He quit the drink and managed to reconcile with his family, and with the encouragement of his wife, he began taking writing more seriously. In the span of six years, he wrote six novels. Although, at first, none of them were accepted for publication.

Izzi made his big break in 1987, when St. Martin’s purchased his novel, The Take, for $20,000. He took advantage of his new success and increased his writing output, going on to publish more books soon afterward. Each new title brought a new spike in sales. To celebrate, Izzi moved his family into the suburbs of Chicago. He was making it, baby. He was going somewhere.

Izzi’s writing dealt with typical crime fiction themes. Most of his characters were tough motherfuckers caught up in the mob, just trying to make that stereotypical last score to get out of the business. But, thanks to his blue-collar upbringing, he made these stories his own.

Understandably, this pissed Izzi off. He got into an argument with his publisher over their decision and, in the end, struck a deal: Izzi would be allowed to keep his advance money only if he agreed not to publish a book under his own name for the next three years. Does that deal make any sort of sense? Well, no, not really. It seems like the publisher just wanted to be an asshole.

With no other choice, Izzi took the deal and went on to publish three new novels under the pseudonym, Nick Gaitano. Afterward, he went back to his regular name and charged toward a career comeback.

All signs were pointing toward a rather successful career as a crime novelist, so it was a pretty big surprise when Izzi was discovered hanging from his writing office on December 7th, 1996. Although he’d been on antidepressants and was seeing a therapist, the details of Izzi’s death seemed curious enough to warrant further investigation. After all, why would somebody kill themselves while wearing a bulletproof vest, or carrying brass knuckles and a can of Mace? This was a man who hated public appearances—despised book signings. So why such a public display?

Even stranger, police also discovered countless notes Izzi had documented of threatening phone calls he’d received. Apparently, Izzi had infiltrated an Indiana militia group to help research his current work-in-progress. Before his death, Izzi had approached a retired Chicago cop about these threats. He even let him listen to his voicemail; on it, a woman said “he’d been found guilty” and that “he’d be dead by hanging by the end of the year”.

Which is, you know, exactly how Eugene Izzi died.

But here’s the weirdest goddamn detail about all of this: along with everything else, police also found three computer disks containing his latest work-in-progress. An eight hundred page manuscript that included a scene of a Chicago mystery writer who, equipped with both Mace and brass knuckles, is thrown from a fourteenth-floor window with a noose around his neck. Who does the throwing? Well, Indiana militiamen, of course.

Izzi took their threats seriously, as anybody should in this kind of situation. He moved his family to a safe location and started sleeping in his office with a gun nearby. He was scared out of his mind. What was he supposed to do?

So he waited, and either the militiamen found him and threw him out the window, or he offed himself. Which one is it? The coroner eventually ruled his death a suicide, but goddamn, the details surrounding this case are just so weird.

Maybe he was roleplaying the scene in his book so the writing would feel more authentic. Maybe he was trying to create some unique publicity by dangling in front of downtown Chicago for a few minutes. Maybe militiamen got ahold of him. Or maybe he simply no longer wished to live, and thought if he was going to go out, he might as well go out in style.

Here’s the truth: we won’t ever know. We can speculate, sure. But there are no answers here. Just a mystery. A very strange mystery.

Max's new novel, The Mind is a Razorblade, is now available to pre-order through Kraken Press. Listen to the spiders dwelling within your brain and go purchase a copy.

Verrrry interesting. What do you think happened, Max?

Shannon, I don't know. I have a really hard time believing this was a suicide. The details are just so damn convincing of an alternative. What about you?

Max I had never heard of Eugene Izzi before (granted I don't read crime fiction either), but what an interesting article. This kind of makes me want to start doing research and stuff.

Joshua Chaplinsky from New York is reading a lot more during the quarantine August 22, 2014 - 5:47am

Fascinating stuff. Would make for a great movie.

I don't know, Max, but it does make me want to read more about it. It's like one of those logic puzzles or something, like where a kid and his dad are in an accident, and they're taken to the hospital, and the doctor says: "I can't treat this boy because he's my son - how can that be?..." (Boy, you can tell that's an OLD one, can't you - women doctors??? what???? :-o ) Anyway, if I ever have any spare time (like when I'm not beta reading or editing books, or writing or promoting my own :-/ ), I'd be interested in looking this guy up.

The option quietly discussed by those who know certain details is that it may have been a suicide by an extremely coy, struggling author who upon realizing that he was going to commit suicide anyway, decided that salting his death-scene with a few props and leaving a 'fascinating story' with lurid clues would create buzz for his work, cement something of a legacy and at least maybe provide for his kids after he's gone.

Intereting article, thanks. Do you know what happened to that 800 page WIP?

I first heard of him when I was in the Navy. I remember randomly picking a book from our ships very small library, and the book turned to be "The Take". A few years later while home on leave in the Chicago area, I read in the Chicago Suntimes that he had died. I loved his books. I told my mom to send me every book he wrote. I still always think about him.

this article was written about my dad eugene izzi. well written article and pretty accurate. surprised to see people are still thinking about all these years later.

I've been reading through Izzi, nabbing the titles through the used book market.  Does anyone know the status of the rights to his books?  I don't think any of them are up as ebooks anywhere.  That doesn't seem right.  His stuff should be broadly available.