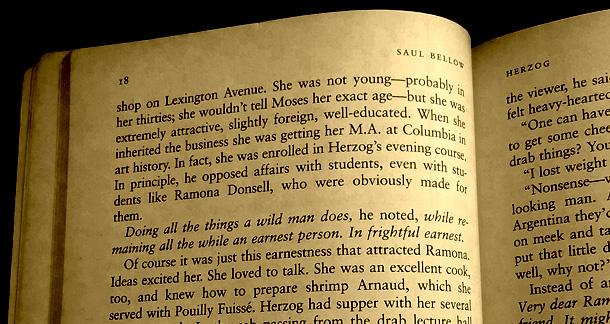 Five years ago, I was with my wife and daughter passing through Knoxville, Tennessee, when I stopped at a McKay's used bookstore (an essential oasis for bibliophiles). Unbeknownst to me, I was at the beginning of my education in Saul Bellow—a literary staple—when I picked up a copy of Herzog (1964), rated by Time as one of the 100 best novels in the English language. One can hardly disagree with page after page of poetry as Mr. Bellow unveils Moses E. Herzog's midlife crisis via mental letters he never ends up sending.

Astonished by the extraordinary work, I began scribbling down entire paragraphs of Bellow’s text in a notebook that I kept just to study technique—the flow of art. Then, for a consummate reader who would never think to break a spine, there on page eighteen was an abomination of Amanda McKittrick Ros proportions: some enfant terrible had underlined in my used copy. How'd I miss this unconscionable assault? There had been three other copies on the shelf and I had checked each one, I had thought, carefully.

...it’s more about going from passive reader to involved student...

Regardless, a couple of days later, I was back in New York with the disfigured classic. For a brief moment, the silliest of notions crossed my mind to take Herzog outside and set it alight while saying a few heartfelt words of goodbye. A proper funeral of sorts. Because scanning ahead, more than three quarters of the book had dozens of passages marred with an abysmal chicken scratch by someone who didn't even bother to form a straight line, looping through words already marked in the sentence above in a lazy crisscross fashion.

Of course, a post containing “virtues” in the title probably gives away my recalibration of thought. Yes, I begrudgingly acknowledged that this former Herzog reader was zeroing in on the aesthetic wonders that were now mesmerizing me, and I became intrigued by what he or she had 'missed' and what they had decided to bring to my attention. I pictured this person farther up on the trail marking various natural wonders for me to experience, akin to a knowledgeable tour guide, albeit one with poor penmanship. Here's one such beauty from Bellow:

If his soul could cast a reflection so brilliant, and so intensely sweet, he might beg God to make such use of him. But that would be too simple. But that would be too childish. The actual sphere is not clear like this, but turbulent, angry. A vast human action is going on. Death watches. So if you have some happiness, conceal it. And when your heart is full, keep your mouth shut also.

He had moments of sanity, but he couldn't maintain the balance for very long.

My guide and I especially liked that last line … I found myself highlighting the previous owner’s underline.

Apparently, a whole host of well-known writers also liked to sully their treasures. Jack Kerouac annotated Dostoevsky’s An Unpleasant Predicament. Herman Melville marked up The Dramatic Works of William Shakespeare. David Foster Wallace’s extensive (and humorous with Wallace gifting the author eyeglasses and a mustache) annotated copy of Suttree by Cormac McCarthy. Mark Twain blighted The Voyage of the HMS Beagle Round the World by Darwin. And Sylvia Plath’s copy of Fitzgerald’s The Great Gatsby offers the distinct perspective of a poet.

And horror master Edgar Allan Poe was a big proponent of marginalia. He wrote:

In getting my books, I have been always solicitous of an ample margin; this not so much through any love of the thing in itself, however agreeable, as for the facility it affords me of penciling suggested thoughts, agreements and differences of opinion, or brief critical comments in general. Where what I have to note is too much to be included within the narrow limits of a margin, I commit it to a slip of paper, and deposit it between the leaves; taking care to secure it by an imperceptible portion of gum tragacanth paste.

Here are my basal reasons for taking a quill to the text. Well, for one thing, when I'm highlighting a section or creating marginalia, I slow down and smell the roses, so to speak, giving my brain a chance to soak in the content more clearly. But, all you staunch anti-markists may ask me: why not just do what you have done in the past and write it down in a separate notebook? Today my answer would be, I no longer see the point in taking the extra time to copy the author’s words verbatim then jot down my own contemplations in a place that is now disjointed from the rest of the main text, and in doing so, increasing the chances of misplacing the notes that I have painstakingly handwritten. Another simple rationale is it’s easier, of course, to re-locate favorite passages when I want to quickly refer back to them.

One final motivation: I feel like I'm moving closer to the writer. That’s not intended to be as nerdy stalkerish as it sounds—it’s more about going from passive reader to involved student, where the novel becomes a textbook for me, and aren’t textbooks meant to be scrawled in as learning devices? My current study is with James Joyce and his 783-page enigma Ulysses, which is crying out for me to decipher what I can from it.

In the case of a book being a rare, one-of-a-kind find (such as a half-million dollar Charles Dickens’ classic A Christmas Carol or a quarter-million dollar The Maltese Falcon by Dashiell Hammett), or a valuable first edition that’s been appraised by the Antiques Roadshow (for instance, $5K each for a 1964 Roald Dahl inscribed Charlie and the Chocolate Factory or 1980 Edward Gorey Collection), I would agree that marking it up would be frivolous and perhaps narcissistic (about as narcissistic as Armand Hammer who bought da Vinci’s The Codex Leicester for $5.1 million then tried to rename the piece after himself). I wouldn’t even deface an affordable yet perfectly respectable first edition for under $50 (see Graham Greene’s The Comedians, Kurt Vonnegut’s Breakfast of Champions, and my beloved Herzog by Saul Bellow). But let’s face it, the 13th printing of a third edition, off-the-rack, trade paperback that most of us end up buying is unlikely to ever fall into the collectible category, so what’s the harm in highlighting or making marginal notes? I see none.

So, blame my new-found passion for the 'ruination' of books on an unknown assassin. I'm sorry I never got the reader’s name, but I'm in good company it appears. And who knows, maybe when my copies of Herzog and Ulysses end up on the shelf in a used bookstore like McKays, my notations will give some Bellow or Joyce newbie or fellow enthusiast a fresh perspective—whether they agree with me or not—and we will become lifelong friends in our shared joy of literature.

Lit reaction is a website that has a magazine column which includes a blog on Fire crackers awards. They have education thoughts and Sinful Virtues of Marginalia that has some techniques. You can check coursework writing services and get some tips about your work. Join their website for more information.

When I was in college, I discovered the joy of owning second-hand books. The highlighter has now become an indispensable tool. I am proud of the rainbow-like colors I can use, and I can freely emphasize the interesting text I find. BY: British assignment writing service - UK Academic Writers.

You have to check Keys to Effective Listening to get more information about marketing.