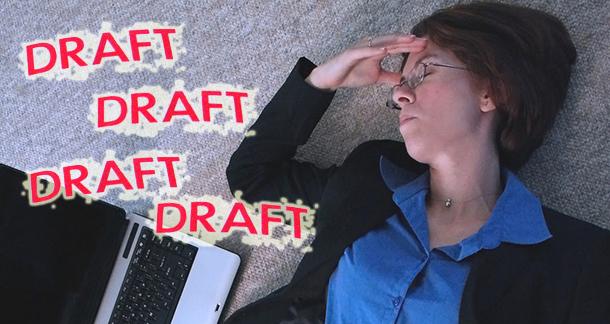 Some people say starting is the hardest part. I say all of it is the hardest part. At least when it comes to writing a book, that is. I previously wrote about how to get to the end of the first draft of your novel, but that's just the beginning. For those of you still working on the first draft, look away. Do not read on as what I'm about to tell you may result in spontaneous punching of your computer screen.

The first draft is the easiest part. It's hard, but it is a lesser degree of difficulty than what is yet to come.

So, what do you do with that information? Ball your first draft up and toss it in the trash? Slam shut your laptop and go back and get your MBA? Of course not (and if you already got your MBA, my condolences). What you do after you've finished that first draft is you get the hell back to work. Because writing is fun, but it's also work.

After you've taken the requisite amount of time between the first draft and the beginning of the second draft, sit down and formulate a plan. Don't just start hacking away in edit-mode when you should be pruning. Here are some things to consider when planning out the revision for your second draft:

Where do you want to be when you finish the second draft?

This is the most important question to ask yourself. And don't answer it with "I want to have a final draft ready for querying or publishing." Because that ain't going to happen. If you can write a perfect book in two drafts, you're a damn genius. But let's be honest, you're probably not a genius, right? I know I'm not.

Knowing the answer to this primary question and the sub-questions it generates will make the second-draft process so much easier.

Sometimes, this question is harder to answer than you'd expect. While a first draft is supposed to be an utterly steaming pile of garbage, it's normal for you to, in some cases, feel like it's perfect.

If you feel like it is, take a little more time away from that story, then ask yourself again: "What don't I like about this first draft?" You'll come up with answers. It could be that scene you wrote that felt forced. Or maybe you were doing a lot of cutting as you wrote because you felt like the story was too long, leaving the narrative feeling a little choppy. Maybe there's a character who really doesn't need to be there or a storyline that wasn't well developed. Think through all of these and pick the top two or three. You can certainly try to focus on all of the things you didn't like in the second draft, but don't worry, you'll have other drafts to handle those things. What you want to do in this draft is have a focal point to help drive you to "The End" again.

Does the plot make sense?

Hell yes, it makes sense. You wrote it and you know what you're talking about. Fair enough reaction, but consider this: Your brain knows a whole lot more than your connection between fingers and the keyboard let on. Even though you think everything makes sense, give your novel an honest read again. There are very likely going to be things that absolutely make sense in your head but when conveyed on the page, they look like that damn optical illusion of the endless stairs.

What you're looking for are those plot holes that escape us as we're passionately writing the first draft. You know, things like the fact that Johnny and Suzie were able to get from Kansas City to Los Angeles on a single tank of gas, or the fact that Rosa left her favorite sawed-off shotgun in the hotel but she was able to use it to blow Henry's face off ten chapters later.

Are the characters strong enough?

I might argue that this one can be left for a later draft. Character strength is important, but at least for me, tackling this is the hardest part of revising a novel. It takes the most thought and generally relies on other things being lined up neatly. I mean, it's hard to handle improving Rosa's character when she's currently using a sawed-off shotgun that she shouldn't have.

But, if you're willing and ready to dive into this in draft two, there are some things to consider. What makes a character strong? What are your characters not doing enough of? What are they doing too much of? Have you properly framed what the character's purpose is early in the novel? And if so, have you followed through with that purpose or successfully pivoted on the purpose through character growth?

These are hard questions, but they are necessary to help you improve your characters in revision. And, of course, those questions are not even close to all-encompassing. Character development probably is and should be the thing you work on the most in your revisions. It's just not always something that should be handled in draft two.

The second draft of a novel, for me, is always the hardest. It's like when you beat a video game and then someone suggests you go back and beat it again but try to get all the collectible items. That shit is tedious, and so are revisions. But you can get through it, and you have to. Because you've got a whole bunch more drafts to get through before you're ready to query or publish. You can do it, though. Now, get to editing.