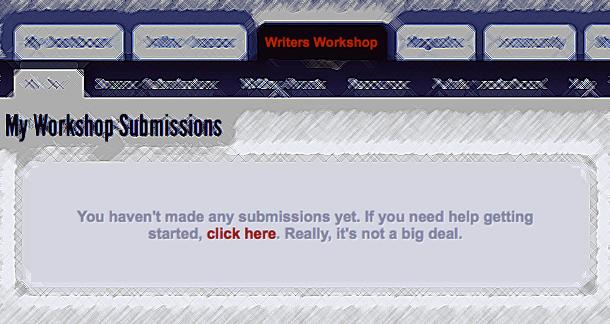 By request, we're addressing a question that has come up from time to time regarding the critiquing process as it relates to short stories vs. essays/non-fiction. Fortunately, a lot of the groundwork has already been laid out in a prior column, which you can read HERE. It's a nice little refresher on how the LitReactor workshop functions and how to get the most out of it. Short stories, novel excerpts, and screenplays are all mentioned—the first of those being the bread and butter of the workshop. What got left off the list was essays/non-fiction, which (to my knowledge) isn't the most popular submission item for one of two reasons.

1.) Our workshoppers aren't writing them.

2.) Our workshop doesn't look like a receptive venue for an essay/non-fiction piece, and therefore, they aren't being submitted.

So let's just make something clear: the writer's workshop is for writing...whatever writing you need help on. So if you're a student looking to get a few extra pairs of eyes on your assignment before turning it in, there's no shame in using the workshop for a little assistance. Same goes for non-fiction.

How we currently critique fiction:

The author lays out their agenda, i.e.: what they specifically want the person critiquing to address, such as flow of story, strength of plot, does the ending work, etc. Then there are the four areas that receive star ratings: concept, structure, characters, dialogue. Of course, the person critiquing the piece should give a justification as to why they scored each individual area they way they did in the body. Example: if you give a person one-star for concept, you better damn well explain what the problem was and how you'd go about resolving it. Same goes for the inverse: a five-star rating should be illustrated much the same way. Dishing out stars is the easy part; justifying them is how we improve the actual writing part...y'know...the whole reason we're in the workshop to begin with.

How to critique non-fiction:

I don't think I can talk about non-fiction without making mention of The Chronology of Water by Lidia Yuknavitch, which is hands-down one of the best memoirs I've read in at least five years. If you want to see non-fiction being done and done right—read this book.

Regarding the actual critique, you can handle it much to same way you do with fiction...almost. The huge bitch with non-fiction is there's very little room for change. If you don't like a particular plot turn—too bad—you're stuck with it. The dialogue is already set in stone. You can't make major suggestions for character changes since they're based on real people. Prepare to run into a lot of roadblocks based on the "but this is how it happened" excuse. Your critique will be less about how to build a story and more about how to shape the story that already exists. Accept that limitation and run with it. The same star ratings still apply, but take into consideration that the writer is dealing with the same roadblocks as a writer that you are as a reader. And if the story isn't there, if it's just not interesting, that may be one of those cases where it's better to cut and run rather than force it. What makes Yuknavitch's memoir so interesting is the fact that it reads like a novel, and not everyone's real life experiences are going to be that captivating. This is something both sides should know when dealing with a non-fiction piece: rewrites and editing can only do so much.

How to critique an essay:

The essay is a beautiful thing because it's all about picking out an argument and proceeding to back it up with supporting facts.

Paragraph one: you hook the reader and introduce your thesis.

Subsequent paragraphs: you support the thesis with factual information. Each paragraph should have its own singular point.

Final paragraph: bring it all together in a tidy conclusion.

The goal of the essay is that the thesis is supported so well by the facts it convinces the reader that you're the authority on the subject. This particular type of writing, however, can be a bit tricky to critique due to rating categories that don't translate over. Again: structure, concept, characters, dialogue. In an essay, the latter two categories might be non-applicable to your "Why solar power is better than wind turbines" piece. For the sake of the critique, you could replace those with thesis and supporting arguments. Concept is essentially thesis here.

When critiquing an essay ask yourself these questions:

Was the thesis clear?

Was the thesis well supported and organized?

In the event that it wasn't, what changes need to be made in order to do that?

Was the concluding paragraph satisfactory?

Judging the piece as a whole, is the author an authority on the subject?

Short fiction: you have free reign here. No suggestions are off the table. Sky's the limit.

Non-fiction: you're restricted to what actually happened. The degree of difficulty is elevated because some changes can't be made without slipping into fiction territory. Same rating categories apply.

Essay: a thesis backed by supporting facts. Current rating categories won't translate here. Best to concentrate on the body of the critique.

Has anyone here had experience with workshopping non-fiction or essays? Let us know in the comments.

The Rookie's Guide to The LitReactor Writer's Workshop

Not that I write these, but how are fictionalized biographies handled? The first movie that comes to mind is Saving Mr. Banks. Mostly based on a true story, but a few parts were dramatized to make a more interesting story.

If you haven't seen it, its difficult to explain without spoiling it. So I won't.:P

Thanks for doing this, Brandon.

For those who were wondering about his "by request" line at the beginning, this column is a direct response to someone asking me if we could do this, me telling the higher-ups, and the higher-ups handing it to one of our talented staff.

In other words, a community request led to this awesome resource that can now be easily referenced at any time. Pretty cool, huh? If you guys have any other column requests, feel free to send me a PM or drop it in this thread, and you might have your next question answered in column form by one of our experts.

Hey, I can know how it works before starting. That's always a plus.

Education is the responsibility of government so that people may get access to this basic need of life at the best research paper writing service cheapest rates. But handing it over to the private sector has transformed it into a well-paying business where the corporates are earning huge profits.

Your designed card images of both the birthday and thank you cards are too simple and improperly designed. However, the internet genie akinator content are all clear. But designs quality needs to be enhanced. Otherwise, no one will buy them.

very interesting information thanks. I love writing essays and reading books I really like, although I mainly use this service for proofreading and editing for my work: https://essaysadvisor.com/ it helps to improve the quality of the text. It doesn't stop me from getting pleasure from writing. Perhaps someday I will go to a more professional level.

Wow, thats nice topic for reading as i see. Im studying law at Boston college and got some huge problems with cheap custom term papers So i asked some service to write my law essay. Hope they will do it really good and my grade will be A.

Here the writer is talking about very valued information based on healthcare software mobile app development company. This company's performance is very outstanding. But as a student, my interest is in my homework o this information is good but not of my use at this time. So I am coming to inform you about a nice online service which does my homework in a short time. You should use this before collecting all information from idaho-humanrights.org I have full trust in this because I am an old user of this online help.