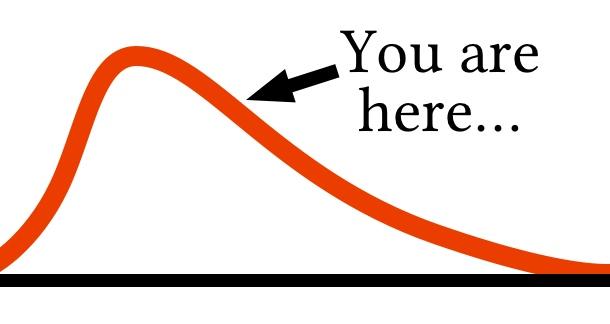 Mourning authors is painful, particularly when they’re not dead yet.

I thought about this when one of my favorite authors, Terry Pratchett, announced the latest addition to his fantasy series. I was elated because the Discworld series was an important part of my childhood, and my progression as a writer. But I also felt sad because Pratchett doesn’t have many books left in him.

He’s dying. Perhaps that’s an oversimplification. We’re all dying, after all. But Pratchett has early-onset Alzheimer's disease. Barring any miraculous advances in medical science, it's likely that the disease will soon steal his ability to write books.

The sadness only deepened when I learned that Pratchett’s daughter, Rhianna, planned to continue writing Discworld novels when her father couldn’t. I should have been happy. She’s a wonderful writer, and I love Discworld novels.

So why wasn’t I comforted?

It took me a while to realize it’s because the author I loved was already dead in a way.

Writers, like all creators and performers, have a peak, a point when they are at the top of their game. It’s exhilarating for authors and fans alike, but the peak leads to a decline, and the exhilaration eventually wanes. Sometimes the decline is abrupt; sometimes it’s a nearly imperceptible downward trend. There are even comebacks, but eventually everyone passes their prime.

A couple years ago, I eagerly read one of Pratchett’s more recent novels and felt unsatisfied. Now I realize it was because Pratchett — despite being brilliant and deservedly famous — just doesn’t have the same magic that he once had with words. All the pieces were there, but they didn’t fit as tightly as they used to. The characteristic humor was there, but it wasn’t as sharp as before. The engaging plot was present, but less complex than I was used to.

I had to face it. Pratchett’s best books were behind him.

So what is a fan to do? I struggled with this question for a while. Does it even matter what he writes if he’s past his prime?

Certainly we don’t owe any loyalty to authors, not in any objective sense. But they bring us so much joy. We have a right to like what we like, and dislike what we don’t. But they give us the best times of our lives — epiphanies and crying jags and all. They don’t need us to like them, and yet we have to.

And then an even more depressing thought came along: What is it like to be him? His mind is slowly betraying him, and he must know what the outcome will be. What do authors do when they know their best books are behind them?

That question was posed by Elizabeth Gilbert, the woman who wrote international bestseller Eat, Pray, Love. In a TED talk (bear with me…) she explained the existential dread she felt after her book became a runaway success and she realized it probably wouldn’t happen again. After the initial excitement wore off, she had to come to terms with the fact that “It’s exceedingly likely that my greatest success is behind me,” even though she still has other books she wants to write.

That’s bleak. Right in the middle of her triumph, she’s reminded of the capricious nature of success and creativity.

Fortunately, Gilbert seems to have coped well with this realization. In an address given five years later, she explained that she had to make sure her creativity survived her success by focusing on the thing she loved the most: writing. No matter what happened, whether her next book was better than the last or the worst thing she’d ever written, she was focusing on the real motivation, the real reason to love her success and failure alike.

And ultimately, that may be the key to how we treat our idols once they start going downhill. We aren’t obligated to follow them all the way down, but we can still find joy in the things we love, the basic elements that thrilled us to begin with, the books that sang to us.

There will be some significant challenges. How many books do you try before you accept that the first book you read is the author’s best? How do you deal with your own changes in taste and temperament? For instance, Ayn Rand doesn’t have a peak book so much as peak reader age. In other words, any Ayn Rand book will never be as good now as it was when you were 15. How do you let go of your favorite recurring character, the one who no longer acts the same as she once did? How do you adjust to an author’s evolving style when it was one of the things you loved the most?

You’ll have to answer those questions for yourself, but remember Gilbert’s advice to return “home” to the things you love. Acknowledge the books that don’t live up to the rest, and understand that other readers may not feel the same. Love the author for her accomplishments, not her failures, and keep on loving the books that made you who you are.

What do you think? Should you stay loyal to a beloved author even after their decline? Who did you stop reading because you couldn’t stand them anymore?

I have recently felt that way about one of my favorite fantasy writers, Garth Nix. His Abhorsen series was fantastic and still holds up today, but now he makes his income on bland chapter books with none of the mystery or subtle suspense and world building he used to have. It's...sad, since I tried so hard to like his recent work.

On the flip side, another favorite of mine, Tamora Pierce, actually seems to be getting better. Her first book in the Song of the Lioness series reads like Mary Sue with swords to my adult self, but now I find myself really enjoying her eighth book set in the same world. Some authors are like fine wine...!

edsikov from New York by way of Natrona Hts PA is reading absolutely nothing May 2, 2014 - 9:40am

I think the impulse to find an aging writer's work to be worse than what came before is only natural, but the writer may be dealing with subtler themes and a less flashy style. There's something to be said for "twilight" works that makes them precious for that reason alone.

I'm thinking more of film directors, perhaps. For example, it's just a fact that Billy Wilder's Avanti! isn't as good as Double Indemnity or Sunset Blvd. or Some Like It Hot. But there's a sweetness to Avanti! that is new to Wilder; it's a film that could only have been made by an aging director. Critics called him "past his prime." Of course he was. That doesn't mean his later works are failures.

Have a little compassion, folks!

Dwayne from Cincinnati, Ohio (suburbs) is reading books that rotate to often to keep this updated May 2, 2014 - 10:50pm

To every thing there is a season, and a time to every purpose under the heaven

On the writer's side I wander if maybe projects get dragged out?  I'd love to read a book called Swan Song from Terry Prachet about how he deals with the disease at the end of his life, a brave memoir.  It might be the best of Disk World is past, but Terry Prachet.

Are readers, maybe we don't accept the time we should read something has passed.  Often art is aimed at a narrow group.  I thought Hunger games was neat at 33, but it proably had more impact on 12 year olds.  In 20 years and reading Suzanne Collins would seem like she'd lost her magic, but really they'll lost their childhood.