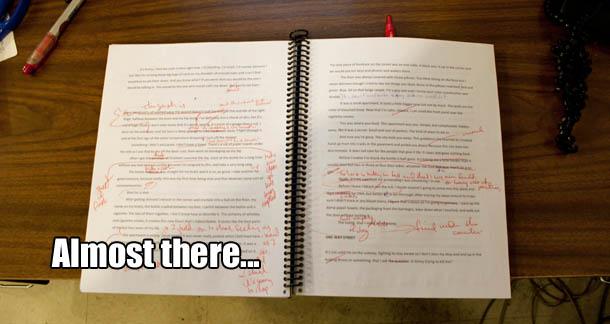 Recap: This is a monthly column about trying to publish my crime/noir/literary novel, formerly known as 'Apophenia'. Part 1 talked about the book and its history, as well as my decision to seek an agent. Part 2 talked about beta-readers and the various methods for finding an agent.

The hardest part of the creative process (at least, right now, because it's where I'm at) is knowing when to let go.

Last month I told you I handed my book off to some beta-readers. Three of them came through big time, with amazing comments, suggestions and support. I used their input to forge a new draft--and it took a little bit longer than anticipated. Since I edit by hand (see above), it took me more than a week to key in all the changes.

Once it was done, I had it printed one last time and gave it to my wife. She's searching for lingering typos and faults in logic. When she's done, I'll give it one more quick pass. This is the final countdown to my finished novel. Next week it'll be done.

Except not really, because done is a subjective word.

THE JUNKIE INSIDE ME

A good friend of mine, Prophetnoise, has been making dubstep since before dubstep was a meme. We talk often about the creative process. Him being a musician and me being a writer, our methods are different, but we're both striving toward the same goal: To create a piece of art that elicits an emotional response.

We both share a high personal standard of quality. Neither of us wants to stand behind an inferior product when we know we can do better. But it's easy to get trapped by those feelings. One of the issues we've discussed, more than once, is: When can you look at something and say it's done?

I've been feeling a great deal of pressure to get my book done, wrapped up, and sent out. In part because it's been three years now and I'm ready for something new. Also because I'm writing this column, which is predicated on me having a book to sell.

But at the same time, there's going to be temptation to read it one more time after this last pass. I can feel it. I'm still jotting down notes while walking home or in the middle of the night. I feel like a junkie: "C'mon man! Just one more content edit! One more to get me straight! After that I know I can kick this!"

The reality is that after this book is published, 10 or 15 years down the road, I'm going to look at it and see nothing but missed opportunities. That's how I am. I have to accept that. It's not easy, but I have to. Or else this column is going to be a monthly explanation of about how I'm almost done.

After this latest edit, my manuscript is 6,500 words lighter. It moves faster and the logic works better. I took out a few scenes that were repetitive nonsense, and added in a golden shower scene because I thought it would be funny. I know that, upon acceptance by an agent and then an editor, it's going to require more revision. That's fine. This is the best that I can do. And I know that now.

So that's why this column isn't talking about query letters. Sorry about that! Next month, promise.

Anyway, it's not like there's nothing to talk about, because I did reach an exciting milestone with the book...

Since the beginning, the title of my book has been Apophenia. It started as a placeholder but after a while I felt stuck with it. Apophenia is the condition of seeing patterns in chaotic data.

Pro-tip: Your title sucks if you have to constantly explain what it means.

One of my beta-readers suggested I change it (thanks Emlyn). I e-mailed my wife, who had just finished reading the book, and asked her what she thought. She came back with a couple of suggestions and one of them just nailed it.

The new title of the book is New Yorked.

And I swear, it fits so well. The day after I settled on the change I went out for drinks with a very cool author, of whom I am a huge fan. We talked a bit about the book, and when we got to the title, the conversation went a little something like this:

Author: So what's the title?

Me: I just changed it. It used to be Apophenia, which is the psychological condition of seeing patterns in random data.

Author: That's terrible! What did you change it to?

THE IMPORTANCE OF NETWORKING

The path to publication is not a straight or predictable line. It is fraught with twists and turns. This lady got her book published because she was discussing it with a friend on the subway.

Querying isn't the only way to get published. Networking is important too. And over the past month, besides editing and stressing about this column, I've been doing a lot of networking. Like going out for drinks with other writers. And getting a short story picked up by a very groovy noir journal. And getting another story short-listed for an anthology. And tending to my public profile (for what it is) by blogging here.

If you want to get published, it helps to keep multiple channels open. I'm not saying you need to do a million extra-curricular activities to get a book deal. I'm just saying: These are the things I'm doing, and it can't hurt (except for when I write blog posts that make people angry).

It can get a little overwhelming. Sometimes I feel like my head is going to explode. But if you keep at it and work hard and you're not a jerk, it'll pay off. For example, you might be able to convince someone with a fair amount of acclaim in the publishing industry to read your book.

Which is something else I did this month. And that is exciting.

Query letters! The dreaded synopsis! Why I hate trying to label my own work! (Is it noir? Is it literary? Who knows!)

Got questions? Ask away.

Who ended up picking up the story? Needle?

Class Director
Rob from New York City is reading at a fast enough pace it would be cumbersome to update this March 1, 2012 - 1:32pm

@Keith, yup. They picked up a story about a secondary character from this book--Ginny Tonic, my drag queen crime lord.

Since I've been commenting on every column you've written so far, thought I'd chime in once again.

I noticed a strange phenomenon with my writing: I don't remember writing it.

See, as I completed each chapter of my novel, I forwarded it on to a friend who proofread it and hashed out any continuity or plot issues with me. Then I moved on to the next chapter. I never actually read the whole thing as one entity.

So, when I signed with a literary agent last week (YES...I'm now represented by Janklow & Nesbit...just shy of 12 weeks after submitting my query) and he asked me to read over it and make any changes I thought necessary, I was surprised to learn all the wonderful things I'd written.

Anyway, my point is, revisions are a necessary evil but I wouldn't get too close to it all if I were you. Someone else further up the food chain may not see it the same way as you.

Class Director
Rob from New York City is reading at a fast enough pace it would be cumbersome to update this March 1, 2012 - 1:36pm

@Jason, first of all, congrats on getting representation, and best of luck going forward! That's fantastic news.

And, I know what you mean. There's plenty of times that I stumble across something that I don't remember writing, at all. But over the course of 85,000+ words, I think that's to be expected.

The best part is when I stumble across something and it's so good I can barely believe I wrote it.

The worst part is when I stumble across something that's so terrible and contrived, I rethink my career choice.

I really like this column, Rob. It's exciting to follow you on your path, and get an insight into your struggles with editing, perfectionism and various expectations. Congrats for the short stories being picked up and your MS bleeding from all the right places. ;) Keep your chin up!

I think it was Coleridge who first said that "A great poem is never finished, only abandoned".  It's true of any art.  You can keep on tweaking something forever but at some point you have to abandon it to others,  if only to save your own sanity.

Right, now back to the eighteenth draft of this screenplay...

Class Director
Rob from New York City is reading at a fast enough pace it would be cumbersome to update this March 2, 2012 - 8:16am

@Karina - That quote is exactly right.

@Karina - you grabbed the quote before I did. I find it useful in every way. I thought it was Picasso who said it, though, but I wouldn't trust me.

I'm right there with you, Rob. I'm coming up on the five-year anniversary since I started my novel, the last two of which have been all revision. I'm definitely close to the point where I can't physically make my book any better. Maybe it could be a better book, but if it was, it would no longer be mine.

BTW, I like your title change. I liked Apophenia, but then again, I like looking up words I don't already know the meaning of. Most readers don't (which I came to find out when people read the early drafts of my novel). But New Yorked makes me want to crack your book open rather than the dictionary.

Class Director
Rob from New York City is reading at a fast enough pace it would be cumbersome to update this March 8, 2012 - 11:18am

@Vox - Thanks kindly. I'm so happy with the title change.

And best of luck with your book. It's kinda exciting, isn't it? The thought of letting go and moving on to something new? Especially after all this time...