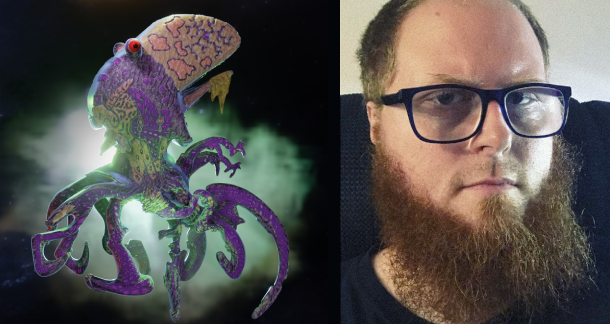 The Parasite From Proto Space & Other Stories, a collection of short fiction and prose by Brett Petersen, is a glimpse into the mind of an autistic savant: a rollercoaster ride through hallucinatory realities subject to shift at any moment. True-to-life characters and their universally human experiences serve as the reader’s guiding thread through the fractal labyrinths of the Squid Universe: a world shaped by mental illness, paranoia, Id-driven language experimentation and theological speculation inspired by the works of Philip K. Dick, H.P. Lovecraft and Jorge Luis Borges. This collection is a scream from the bottom of the well of mental illness: carvings on a madhouse wall that cannot be ignored. After reading these stories, you might just come to understand the connection between neurodiverse minds and higher realities. You might not ever need to drop acid again either.

It’s hard for me to pinpoint the exact moment this book was conceived, but I can tell you that pieces of it were beginning to gestate as early as 2008 when I declared a major in English at the College of Saint Rose. Around that time, I wrote a story called “Jimmy and the Crows,” which I would later rename “Ca-caw!” This story was based on relatively fresh memories of being hospitalized for depression, as well as the psychiatrist I was seeing at the time, whose office had a leather chair with brass buttons which I depicted in the story as a means of giving the office an antiquated feel.

Another story that came into existence during my college years was “The Labyrinth and the Jingling Keys.” In my mind, this piece was the crowning achievement of my time at Saint Rose (more so than my senior seminar paper!) I wrote it in 2011 as an assignment for a fiction writing class with Professor Hollis Seamon, author of the incredible YA novel Somebody Up There Hates You, which has apparently gotten a lot of accolades in Europe as well as here in the U.S.

My journey as a writer has really only just begun, and this is merely a brief glimpse of that beginning.

“Labyrinth” was based on a manic vision I had at Four Winds Psychiatric Hospital of being encased in a bubble, sucked into a vacuum cleaner, sent through the power cord and into the outlet where I emerged on the other side of the wall into a sea of infinite blackness. This was also the first fiction piece of mine that ever got into print thanks to Josh Smith of Bedlam Publishing. He saw something in my writing and decided to publish me in his journal Loud Zoo in 2014. Since Smith also ran an editing company called The Letter Works, I decided to utilize his services and brought him onboard as my editor.  As I would find out later, his edits (on all of the stories in Parasite) were damn near perfect. The pieces didn’t need much touching up at all when they were accepted as part of the finished book much later on.

It was around this time that I decided to commit myself to writing twenty-two stories (each corresponding to a trump card in the Tarot deck as well as a Hebrew letter) and getting each of them published in a small journal or magazine before compiling them into my first book.

Between the years of 2014 and 2018, I would write the rest of the stories that appear in Parasite as well as many others that didn’t make the cut. I would sit at Starbucks for eight to ten hours a day with my laptop and a Frappuccino, submitting to every journal, magazine and anthology listed on the Submission Grinder. After doing this every other day for weeks, months and years on end, I managed to find homes for all but two of them. I learned through trial and error that most journals do not accept pieces over eight-thousand words. The stories of mine exceeding that word count still haven’t been published and may never see their day in print.

By 2018, I figured that since the two longer pieces were well-edited, they’d probably be fine as part of the final manuscript. I compiled the stories into a Word document with the working title of Welcome to the Squid Universe, and began submitting it to literary agents. But after one too many rejections, I realized that most agents were looking for novels, not short story collections. So I switched gears and spent the rest of that year submitting to indie presses.

Little did I know that my big break would come in February of 2019. Another former Saint Rose professor, Daniel Nester, knew of an indie press called CLASH Books that was seeking weird, edgy sci-fi content. He mentioned my name to Leza Cantoral and Christoph Paul, the wife-and-husband operators of the press who happened to be doing a reading at a local coffee shop. Nester invited me to the event and introduced me to Cantoral and Paul who expressed interested in seeing my manuscript. I sent it to them and, within a few weeks, they replied saying they loved it and wanted to publish it. I was over the moon. My college education, years of hard work and sore tailbone from sitting at Starbucks and sending out hundreds upon hundreds of submissions had paid off!

It was quite eye opening to witness a book being put together for the first time from the inside. As I mentioned before, not all the stories I submitted as part of my manuscript would make it into the book. As Paul would tell me in an email, only nine of the stories were of the quality that CLASH was looking for in a collection.

Early on in my publishing career, I learned to be extremely flexible when it came to my vision for my own work. The fact that a large percentage of the stories were cut did not bother me: I figured they were choosing the best of the best, and that maybe someday I could compile the ones that didn’t get picked into an uncollected stories anthology.

The title I had come up with didn’t work for them either. Cantoral suggested The Funeral Machines, but her other suggestion: The Parasite From Proto Space with the subtitle & Other Stories stood out to me more. I liked it mainly because, like my Squid Universe title, it referenced a creature, but it also had a B-movie quality that I thought would be a perfect allusion to the pulpy nature of my stories. 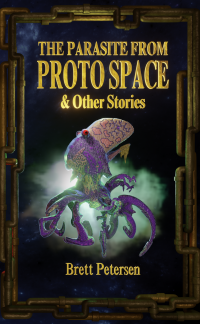 After the title was chosen, it was time to come up with a cover. The job of designing a cover would be delegated to Cantoral’s brother Lev, a cartoonist and graphic designer who lived in Chicago. Cantoral suggested I draw my own version of a parasite-like creature on which Lev could base his unique space parasite design. But due to a miscommunication between Cantoral and her brother, the creature he came up with was much closer to my original drawing than Cantoral had intended. It was essentially a 3-D model of my drawing mapped onto a 2-D plane. Despite it not being what she had originally wanted, both Cantoral and I agreed that we liked Lev’s model and chose to go with it anyway.

The titular parasite was featured on the cover surrounded by a border of golden pipes made to look “futuristic yet ancient” as per my specifications. I had always intended this border to be a reference to the golden monolith in the Xenosaga series of video games known as the Zohar. My writing has always been heavily inspired by Xenosaga and other video games in the sci-fi JRPG genre like Chrono Trigger, Shin Megami Tensei and (more recently) NieR.

The book was released on January 28, 2020. A release party and a tour to promote it were planned, but all of these good things were thrown under the bus when the COVID-19 pandemic hit in February/March. The pandemic has proven to be a constant thorn in my side in terms of trying to promote and sell copies of this book. My favorite places to do promotion work such as Starbucks and local libraries have been shuttered, and as an autistic person, this loss of comfortable, familiar settings has plagued (pun possibly intended) my ability to successfully sell this book. I can work at my apartment, but not being able to go somewhere, do work and come back home (a routine that has been imbedded in me since I was a small child going to school) has completely thrown off my potential to get the word out there regarding this damn book!

Hopefully this little origin story of my life’s greatest work so far will be of interest to other writers as well as readers. My journey as a writer has really only just begun, and this is merely a brief glimpse of that beginning. I’m currently working on a novel which I hope to have finished by the end of this year. More than likely, it will be done by mid-to-late fall, but the revision and editing process will probably take me well into next year. Ah, next year: a time when coronavirus might just be vaccinated out of existence. What a glorious time that will be.

Buy The Parasite From Proto Space & Other Stories from CLASH BOOKS, Bookshop or Amazon

Brett Petersen is a writer, musician and artist from Albany, New York whose high-functioning autism only enhances his creativity.