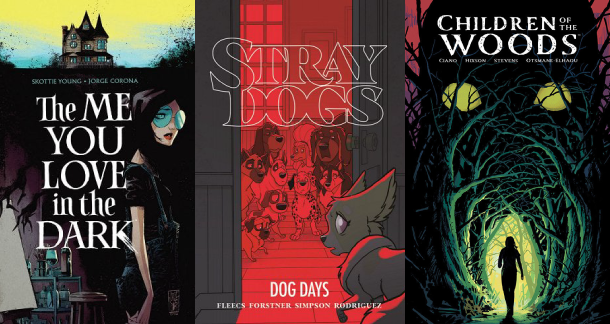 This has been a powerful year for horror, especially in the comic industry. Creepshow came back with a triumphant new series followed by R.L. Stine’s Stuff of Nightmares, and if that wasn’t enough, Hill House Comics gave us Refrigerator Full of Heads (Rio Youers) and Image Comics gave us dark, magical realism titles like Ten Thousand Black Feathers (Jeff Lemire and Andrea Sorrentino) and Bolero (Wyatt Kennedy and Luana Vecchio), a nightmare hunter in Slumber (Tyler Burton Smith and Vanessa Cardinali), a zombie healing bioengineering firm in Farmhand (Rob Guillory), and the fantastically violent and erotic masterpiece that is Lovesick (Luana Vecchio). Plus, let’s not forget Nightmare Country, House of Slaughter, and Something is Killing the Children (James Tynion IV), Eat the Rich (Sarah Gailey), and Blood-Stained Teeth (Christian Ward). I could go on, but if the above doesn’t already make you at least a little bit curious about what’s going on in comics, I honestly don’t know what will. What I can say though is that I’ve read a lot of truly weird, disturbing stuff this year and I want to talk a little bit more about some of my favorites from the year.

"The Nice House on the Lake" by James Tynion IV, Alvaro Martinez Bueno, and Jordie Bellaire 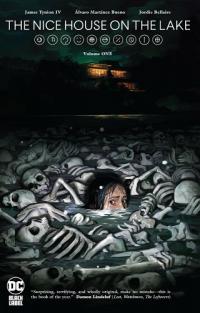 I will read anything that has James Tynion IV’s name on it, and to be honest, a lot of 2022 titles did, which was great for fans like me. I became a constant reader when I picked up the first issue of Something is Killing the Children in 2019, and after his graphic novel The Closet broke my heart (in the best way), I knew I had to get my hands on The Nice House on the Lake as well, and as predicted, it did not disappoint. This one felt bigger than what I’ve read from him so far in that he’s juggling a lot with the narrative and I’m not sure exactly where it’s going to go but trust me when I say: I’m here for the ride.

Essentially, we’re introduced to a group a people who have all been brought together in this massively beautiful lake house by the same person: Walter. Now something is off about Walter, and we get the sense that these people have been carefully selected and brought together in this location for a bigger purpose and when we find out what that is (and woof! It’s delicious) readers can feel the tension dripping off the page. I mean, I felt claustrophobic reading it and there was definitely some existential crisis brewing by the time I finished the first volume.

Get The Nice House on the Lake at Bookshop or Amazon

"The Me You Love in the Dark" by Skottie Young

Skottie Young is another must-read author for me and that started with I Hate Fairyland, which also made a comeback this year (and yes, it was everything I wanted and more). The Me You Love in the Dark was much, much, darker than what I’m used to with him though, and he really exceed my expectations. Now I love a good artist story, and this narrative follows a visual artist named Ro who retreats to a creepy old house in the middle of nowhere to get her art on and let’s just say the house has other feelings—and those feelings are not what you’re thinking. This was beautiful and macabre, and I think it spoke to a lot of emotional issues that creatives can and will relate to, especially surrounding love, so light some candles, sit in a comfy chair with some tea, and process all those hard feelings and just don’t talk to the shadows, okay?

I hesitated to put this on my list because this book destroyed me. I cried from start to finish, and while I can admit that the story was well-written, this one was just too much because I’m such a dog lover and a big animal person and I struggle with anything that depicts animals in pain, however, I can critically say that the storyline for this was brilliant. In fact, I was so invested in it, that despite me having a bit of a moment, I had no choice but to keep reading. The cover pitched the series as a mix of Silence of the Lambs meets All Dogs Go to Heaven, and that’s spot on. It’s a detective-esque read where the dogs are the main characters and the detectives, and while this one will hurt, it will also make your heart grow three sizes in the process. Plus, they did something really cool with the variant covers where they essentially took well-know horror movies and redid them with the dogs, so you’ll see versions of Annabelle, Dracula, Evil Dead, Ghostbusters, Midsommar, you name it. Clever and beyond perfect for horror fans and collectors alike!

Get Stray Dogs at Bookshop or Amazon

"Over My Dead Body" by Sweeny Boo 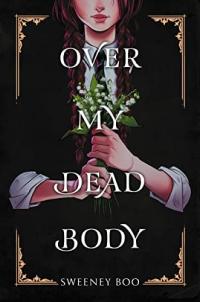 This was a new author for me, but no one is going to write a witchy graphic novel without me reading it! Taking place at the Younwity Hidden Institute of Witchcraft, this story follows a group of young witches who are trying to study their craft, uncover a terrifying mystery, reverse hexes, and find their missing friend…all before Samhain. Fans of Chilling Adventures of Sabrina will dig this read—as will new fans of Wednesday Addams! -- and if the story doesn’t pull you in, the artwork certainly will. I devoured this one, and I plan on using it in my WitchLit classes in the future. Pick up a copy, save it for Halloween, and trick or treat your future self.

Get Over My Dead Body at Bookshop or Amazon

"Children of the Woods" by Joe Ciano and Josh Hixson

I’m a sucker for stories that have or allude to anything lurking in the woods, and so the title alone was enough to get me to pick this one up, but after reading how Amber and Quinn get involved in some secrets brewing in the Black Woods, I knew it was over for me. This one was more of an open-to-interpretation, slow-burn kind of read, but I loved the artwork, and the horror aspects of the narrative were done really well. I think fans of Harrow County and Wytches will enjoy this, especially if they’re sitting in the middle of a pentagram, in the woods, under the full moon. But don’t say I didn’t warn you.

Get Children of the Woods at Bookshop or Amazon

With that said, I still have a list of comics and graphic novels I’m hoping to explore before the year closes out. Below is what’s on my list, but if you have something that you really loved or think I should check out, please be sure to drop your recommendations in the comments.