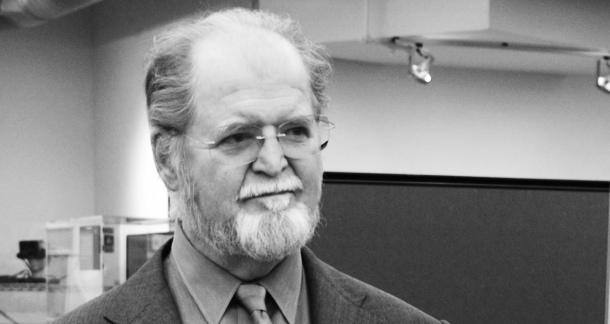 Those who spend significant time reading science fiction inevitably run across the name Larry Niven. That’s because he’s such a longstanding master of the genre, and has earned himself a place in the pantheon of science fiction gods. Or cyborgs. Or alien forebears? Whatever it is we worship in science fiction, Niven is it.

He earned plenty of awards, too. He won the Hugo award five times and was nominated nineteen times. He also racked up four Locus wins and a Nebula award, not to mention the dozens of other awards he’s been nominated for.

In fact, his books have been around so long and had so much influence on the genre that I assumed he must be dead by now. Imagine my surprise when he sat down next to me a few weeks ago at a panel preceding the Nebula Awards show. That’s right, he’s still kicking around and staying active in the science fiction community.

Niven was born in Los Angeles, California in 1938. His obsession with science fiction truly began during his time at college. After little more than a year at the California Institute of Technology, he discovered a local bookstore with a seemingly inexhaustible supply of science fiction pulp magazines. He subsequently flunked out of college because he spent so much time there. He eventually finished his degree but then dropped out of grad school to become a writer, proving to fathers everywhere that at least one person hasn’t wasted his life by dropping out of school.

Side note: You’re not Niven. Stay in school, kids.

Niven sold his first short story, “The Coldest Place”, in 1964, and from then on he maintained a fairly positive career trajectory. He spent plenty of time interacting with the burgeoning science fiction crowd, becoming a well-known member of the community. That’s how he met his wife, “Fuzzy Pink.” Nope, that’s not a joke; she went by that name (although her birth certificate read “Marilyn Joyce Wisowaty”), which seems like an intensely sci-fi thing to do, so who can blame her?

Niven’s work is heavily influenced by science. Most of his stories stem from a scientific principle, which he builds a setting and plot around. In fact, the ideas and their execution are frequently acknowledged to be stronger than his characters or plot arcs. But that doesn’t diminish the strength of his books or his ability to take very technical subjects and make them easy to imagine.

That’s slightly disingenuous because Niven likes to collaborate with other writers. A large portion of his books were co-written with other notable authors, such as Jerry Pournelle and Edward M. Lerner.

It’s a little silly to pick just a few of Niven’s books to discuss here. There are two reasons for that. First, just look at how much there is to cover in his list of published works. Fair warning: You’re going to need a couple minutes to scroll through that list. Second, most of his books and short stories are part of larger series that take place in different universes.

Nevertheless, this is a primer, and you must be primed. So here are some of Niven’s best known books. Each of these take place within a larger narrative, but I’ll let you decide which deep end you want to dive into. 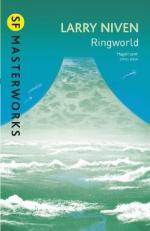 This is Niven’s most iconic book (although some say it’s not his best). This is the book that most often comes up in a discussion of Niven, and for good reason. It’s fascinating. The setting is a giant ribbon of artificial land that orbits around a star. The ring is approximately as big around as Earth’s orbit, making it unspeakably massive and perfect for harboring life (er, on the inside of the ring, that is). It’s complex and extremely hard to summarize here, not to mention the story includes a cat-like warrior, an alien with two heads, and a very lucky girl. Suffice it to say that Niven created a strange but believable “world” that completely mesmerized the science fiction community when it came out in 1970. It went on to win the Nebula, Hugo, and Locus awards, which is considered the Triple Crown of science fiction.

Ringworld is also notable for being part of the Known Space universe. Known Space is probably Niven’s best-known setting and includes the largest portion of his stories. There are three sequels to Ringworld alone, along with a five-book companion series and numerous other books and short stories set in this universe. 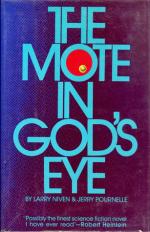 This book, published in 1974, is often recognized as Niven’s best, even though it’s slightly less well known than Ringworld. Robert Heinlein said it was “possibly the finest science fiction novel I have ever read." It was nominated for the Hugo, Nebula, and Locus awards, but didn’t win.

The Mote in God’s Eye is a story of first contact. A thousand years in the future, humanity has colonized hundreds of star systems and never found intelligent life. Then a probe finds life around the Mote, a distant star. The Moties are a complex and ancient species, and the book illustrates interesting aspects of alien sociology.

Instead of taking place in one of Niven’s universes, The Mote in God’s Eye takes place in the CoDiminium universe created by co-author Jerry Pournelle, which they would revisit with several subsequent books. 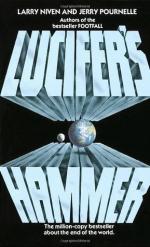 Once again, Niven and Pournelle collaborated on a Hugo-nominated novel, but this time they went post-apocalyptic. Lucifer’s Hammer was published in 1977 and chronicled the disaster following a comet (you guessed it, the comet is named Lucifer’s Hammer, hyar) colliding with the Earth. The planet comes apart at the seams, experiencing earthquakes, tsunamis, volcanoes, and every other imaginable disaster. Once the destruction slows down a bit, what’s left of China launches nukes at what’s left of Russia and things spiral further down into oblivion.

The majority of the book is spent following a few survivors and watching humanity’s descent into depravity when they aren’t being squashed by any number of flying, falling, or exploding objects. The science is solid, and there are interesting characters, but mostly it’s just a reminder that, holy crap, it would really suck if a comet hit us. 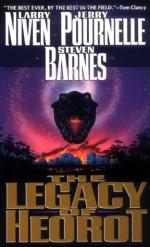 'The Legacy of Heorot'

In 1987, Niven started yet another universe by publishing The Legacy of Heorot, and decided one co-author wasn’t enough. Written with Jerry Pournelle and Steven Barnes, this book chronicles the toils of a ship full of colonists sent to settle a planet orbiting Tau Ceti. But when they wake up from hibernation, they find that 100 years in cold sleep has made them stupid. Literally, it lowered their intelligence and reasoning skills so that now everything on the planet is a threat. They go on to fight a protracted war with particularly vicious local fauna, and the book is a great illustration of how people overcome setbacks and use science to improve life. Niven later wrote two more books set in this universe. 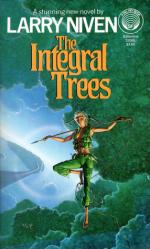 And finally we have what some consider the best example of the way hard science fiction can blow your mind. In The Integral Trees, published 1984, Niven managed to create a setting and culture so unexpected and unusual that it boggles the mind. The most amazing part is that he manages to explain it all in a way that makes sense (although a cursory knowledge of physics or access to Wikipedia sure helps).

This book follows a civilization of post-humans who live in a ring of atmosphere encircling a neutron star. There is no up or down, no gravity, nor any ground to speak of. There are, however, animals that can see in all directions and fly everywhere (naturally), giant globules of water floating around because there’s nothing for them to attach to, gigantic “trees” that grow to be hundreds of miles long, oh, and a malevolent A.I. in a long-forgotten ship. It would be easy to call it crazy, but Niven makes it all fit together. It’s just so weird and unlike anything else you’ve read that you have to admire it.

The Integral Trees is part of The State universe, along with two other books.

Despite taking all the great ideas (not really, but sometimes it seems that way), Niven has been enormously influential for hard science fiction writers. His work has been expanding minds for over fifty years, and that probably won’t change anytime soon.

In some ways, Niven’s works haven’t aged well, but mostly in the same ways that other gold- and silver-era sci-fi hasn’t. That means there are plenty of gender and race depictions that make people cringe. For instance, just about everyone will feel uncomfortable when reading a scene in The Integral Trees where someone pretends to perform a gynecological inspection. And some of the basic science principles in a few stories haven’t held up well with the continually advancing knowledge of the scientific community.

However, there are plenty of good things to learn from Niven, and many current authors have cited him as an important influence on their writing. At the very least, he is a shining example of how science should inform the stories we write, and that some of the best fiction comes from ideas in the non-fiction world.

Christina Re from the United States is reading something a friend wrote June 4, 2014 - 11:05am

I loved Ringworld. The concept of communicating with color and music in the afterlife struck me as perfect, both in human and other-worldly terms.

This was one of the books that a group I was part of in college read, and a good bit of our discussion centered on comparing the visual special effects in the film Star Wars to the reader's mental construction of the universe in Niven's book, and how they affected each of the stories' impact on their audiences.