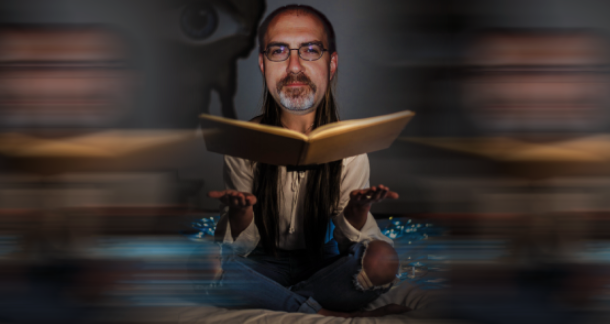 If you’re hoping this piece will feature some kind of romantic advice I learned from Brian Keene, you're going to be disappointed. If you really want relationship tips from Brian, you should probably just ask him on Twitter, because this will be an unromantic article in many ways.

Before I saw the magic that was happening in Brian Keene’s bedroom, I was giving serious thought to quitting the writing life. This was in the Fall of 2014, and not only was I suffering from writers block, I'd flat out lost the joy and sense of purpose that comes from writing. You know that feeling you get when ideas, characters, and language meld together to make something magical? That wasn't happening anymore. When I wrote it was just…bad. I hit a point where my WIP wasn’t going to get better no matter how many drafts I ended up doing.

Something was missing and I was losing faith that I’d ever find it again.

Showing up at the page (really, screen these days) no matter what is something akin to magic. You might as well be casting a spell.

As a musician, when you’re in a rut you play a show or do a small tour. This works for writers as well. Word spread on Facebook that a a crew of Bizarro writers were going to do an east coast tour. I write in a lot of genres, but I have a special place in my heart for Bizarro, because it’s the genre that's about saying, "fuck genre." To quote Brian Keene, “Bizarro writers are the genre fuckers.” Since I was struggling to write anything I felt good about, I figured hanging with some Bizarros would help get me out of my depressing dry-spell.

I hopped in my car and drove south. I was hoping that I’d find that magic again. That purpose, that love that I was feeling at the start of the decade. Maybe this tour would provide that much needed spark.

The tour itself was pretty fun. There is something invigorating about reading your work in front of strangers. Writing is so lonely and lacks moments of immediate gratification, and hanging out with other writers can be a huge morale boost. But by the final stop in York, PA—a reading featuring Brian Keene—I was still full of crippling doubt.

After the reading, we met up at Keene’s place for beer and his infamous venison stew (from a deer he shot and prepared himself). It was a really good stew. We all drank up and talked, but I wasn’t feeling that excited. I knew I was going back home and I felt aimless in many ways. Not only did I need to reanimate my writing, but my dream of starting a press felt like it was on the verge of death as well.

Full of stew and doubt, I went to bed early, hoping to sleep off the rut. I don’t remember any dreams from that night, but I remember waking up really early to go to the bathroom. What can I say? It was some heavy ass stew. I stumbled my way to the bathroom and did my business. When I walked out, I heard keys typing, with daylight barely showing itself.

It was so early. Who the hell would be writing at that hour? The answer was simple. It was Brian Keene, miraculously up at 6 AM— making magic in his bedroom. Dude was partying hard the night before, hosting a bunch of young and drunk Bizarro writers, and the next day he shows up ready to do the work.

I’ve read a lot of craft books, and they’ve helped me out a lot (more so as an editor than a writer) but no craft book can teach what I learned early that Sunday morning. The faith and passion of showing up at the page (really, screen these days) no matter what is something akin to magic. You might as well be casting a spell. Seeing a seasoned pro in action like that planted a seed.

I’d like to say that this totally cured my writing ills and gave me a full renewal of purpose. It didn’t, but it gave me hope, and a reminder of the importance of showing up at the page. I kept writing badly, but I refused to quit.

In hindsight, I see now that I hit the same wall that I think I a lot of writers hit. When you write and read enough that your standards rise past your ability. You’re just not able to meet those standards—yet. The key word here is yet. Because there is a powerful magic in continuing to push forward. Showing up whether physically, mentally, or emotionally hungover. When you are not at your best.

I kept at it, and with the consistency of showing up every single day, I did eventually get better. I could feel the magic. I also got lucky. In 2015 I wrote a Bizarro erotica book about Kirk Cameron under a pen name that actually sold quite well. I wrote a ton more of these types of books as they actually made money, and this not only gave me the funds to devote more time to writing, but also to invest in a new press, CLASH Books.

I worked hard to improve my own writing, which still has a ways to go. Doing that work also helped me get better at helping other people with their writing. I enjoy helping writers and I now enjoy my own work again.

I wear two hats now, the hat of a writer and the hat of a publisher, and they both feel good. The ups and downs that come with writing and publishing, I just roll with them now. I have faith and trust the process, even when things seem hopeless and the words aren’t flowing. I show up and know that the magic will eventually show up too.

William Grabowski from Cleveland, Ohio is reading THE WEIRD AND THE EERIE by Mark Fisher January 13, 2020 - 10:37pm

How bracing to read an honest slice-of-life. Thank you, Christoph.---Bill Grabowski