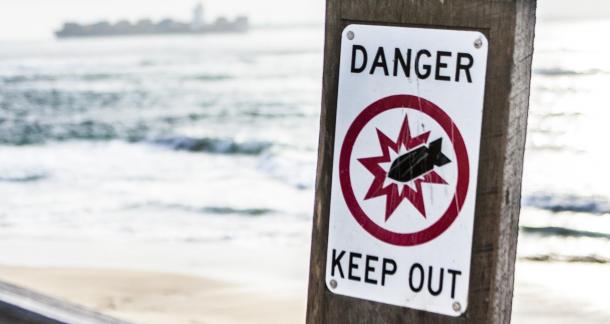 I can still remember the first time I dropped an F-bomb. My friends and I had tied a giant log to a rope hanging from a swing set, and we were spinning it around. I got too close to that spinning, wooden devil, and it blasted me in the face, knocking out my front teeth. In that moment, I used a word I had been very familiar with but had yet to ever utter.

I was eight years old, and I was in love. In pain, but in love. I love to curse. It may rub people the wrong way, but I refuse to believe that a curse word in and of itself is disrespectful. Like all language, cursing is only disrespectful in how it might be used. I can disrespect you without cursing just as easily as with. David Joy, author of Where All Light Tends to Go, reminded me of this sentiment recently:

There are things much, MUCH more disrespectful than profanity, condescension being one of those things.

The point is, you don't have to curse. You don't have to like cursing. But if you're a writer and curse words don't appear in your writing at least occasionally, you are building an inauthentic world.*

*Yes, there are exceptions to this, like everything. But I'm writing this for the rule, not the exception. If you are writing for children, probably don't teach them to say "fuck." Wait until they're at least eight, I guess.

If the fucking Starbucks guy curses, then someone in your story who just go her hair ripped out in a clump while fighting a mutant monkey is sure as hell going to curse.

Think about your daily life. You climb into your car, take a trip to the neighborhood Starbucks, order a white mocha with no whipped cream (because fuck whipped cream, right?), and you hear guy-on-his-cellphone-waiting-in-line say something like, "The fucking Knicks should never have brought Phil Jackson on in the first place." You think nothing of it. Drive to work, walk past the smokers in the parking lot as they puff and chat about the "fucking cable company raising prices again." You make it into work, your ears not yet bleeding from all the profanity, and you sit at your desk. One last time before really diving in, you check Twitter, and see EVERY SINGLE PERSON in your feed dropping an F-bomb here and an F-bomb there. Still, you think nothing of it.

But here comes the problem.

You go home at night to start work on your next short story, or to polish that manuscript. You write your dialogue. You write angry characters yelling at each other. You write fight scenes and scenes with people in anguish. And yet, none of those scenes have a single curse word. If the fucking Starbucks guy curses, then someone in your story who just go her hair ripped out in a clump while fighting a mutant monkey is sure as hell going to curse. Or, if not her, someone else will.

Part of being a writer is seeing beyond our own world. It's understanding that what we believe is not what everyone believes. What we do is not what everyone does. So, in creating stories that resonate, we strive to write characters who are different from ourselves. We have to. We're not running around inside the movie Multiplicity just making copies of ourselves.

This applies to things outside of cursing, too. I'm not religious. I know, shocking right? The guy who's advocating for the increase in expletives in storytelling is not religious. Just move past it. With me again? Great. So, I'm not religious, but a lot of people are. Because of this, and because it would be completely inauthentic if I didn't do this, many of the characters I write are religious. Just because I'm not part of a group does not mean that group doesn't exist or is excluded from my stories.

Think of people who curse the same way. That may be a group you don't belong to, and that's fine. I'm not saying YOU need to curse more. I'm saying your writing needs to. You need to write authentic characters who do not share your traits. You need to let them speak with their own voice, not your voice.

Imagine Game of Thrones or The Godfather without cursing. Imagine Flannery O'Connor without the sharp, humorous criticisms of Catholicism. Stories are invariably changed for the worse when confined to match the mindset of the author. Sure, an author's voice should shine through. That's important. But that is not the same as matching the text on the page to your specific world views or behaviors. There are bad people in the world. You are not one of them (probably), but you have to write that bad person. That can't be done unless you write outside your world.

So, can't we all agree to do a quick find-and-replace in our Word documents and drop a few more fucks in? Take a look are your writing. Make sure it's telling the story you want to tell while being true to the characters and the setting. Be authentic, even if it means you have to write things you would never say or believe.