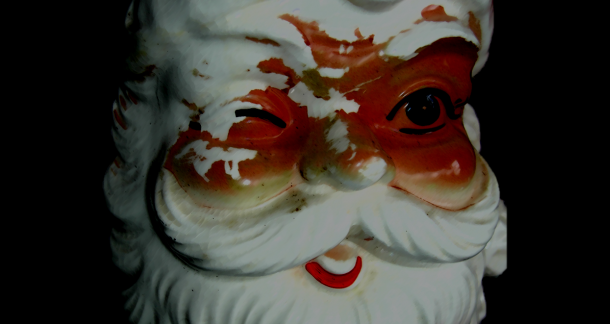 Children's Christmas books are all fun and games. Until you actually look at them.

Let's get these out of the way right up top.

'How the Grinch Stole Christmas' by Dr. Seuss 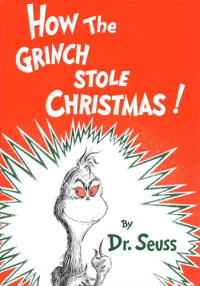 Yeah, the classic tale of a cave monster whose heart grows so large that it's improper for his body. And we always conveniently forget his dog friend, the most abused dog in the history of children's literature. How can people read this thing without hearing that Sarah McLachlan song from the commercial with the dog whose back legs don't work? Messed up. 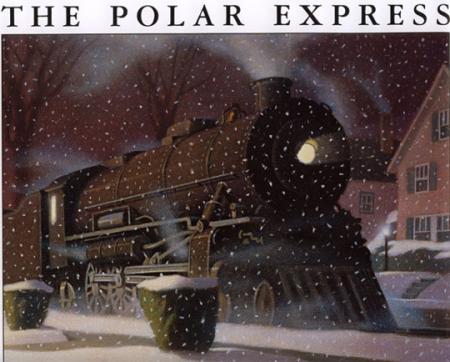 Okay. Yeah, hop on a midnight train to wherever in your pajamas. That sounds safe. A midnight train doesn't sound AT ALL like a haven for bums. Especially if the name of that train is nowhere near a euphemism for cocaine. Seems above board from where I'm standing. Nothing wrong there.

'The Elf on the Shelf' 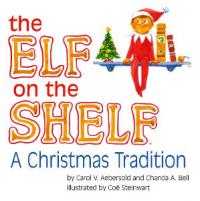 Just an elf who watches you do everything. It's No Diddle December, I guess. This book WAS, however, slightly less creepy than its follow-up, The Voyeur in the Foyer. 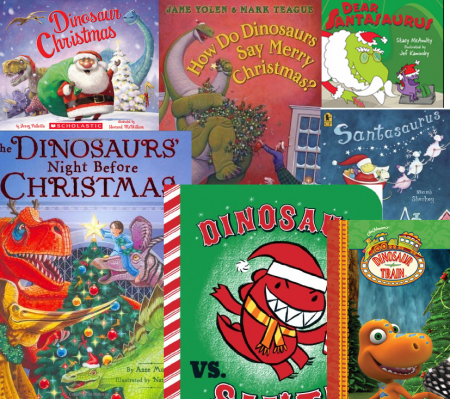 Dinosaurs are all over Christmas like stink on those Christmas candles that smell kind of like Hot Tamales and chemical.

Even if we're to assume that dinosaurs were capable of celebrating holidays, what about the timeline? Is Santa some kind of immortal, earth-wandering elemental? And if so, who is getting the presents he delivers?

Anyway, Dinosaur Christmas by Jerry Pallotta sees Santa having to find animals to pull his sleigh. And hey, why not dinosaurs?

Oh, well, I guess there's the issue that insane Pterosaurs flew Santa outside of Earth's atmosphere. Nothing says "Christmas" like Santa, stricken with terror, spending his last moments wondering if he'll freeze to death or suffocate.

But Santa's nothing if not a trooper. Let's try a different dinosaur.

Yeah, the velociraptors didn't work out because they were "fidgety." Sort of the way, I don't know, the BTK killer could be summed up as being "fidgety."

Christmas, in the world of children's books, is in constant danger. Christmas is on the brink, Santa is out of commission, possibly because he was eviscerated by velociraptors, and it's all going to hell. Unless one person can save the day.

Here is a brief list of people and things that have saved at least one Christmas in children's stories: 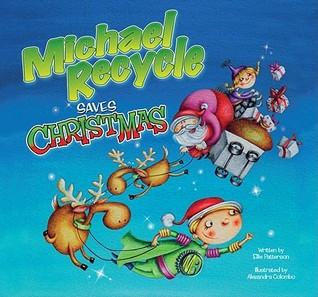 Probably one of my favorites, in Michael Recycle Saves Christmas, the elves all find that they are out of raw materials to make presents. Michael Recycle for the win! Mike comes in and shows the elves that you can RE-use materials to make toys. For instance, forget making a shiny new rubber ball. A bunch of rubber bands all mashed together makes a perfectly good ball. And that tennis bracelet you wanted to get your sweetheart! NO! Why waste new metals when a bunch of paper clips make a serviceable bracelet? You KNOW a gift is good when it's described as "serviceable."

And when the elves work their way down the list to the batch of Wii U's desired by the world's children, I can only assume Michael has a tense phone call with Captain Planet. "I know...I told them already! Well...yeah...I'm just, I'm fucking TRYING, okay? But this is shit. This is shit."

Enough with the saving of Christmas already. I can't stand having this holiday on the brink all the time.

Oh, wait. Not technically a children's book, but I did forget to include Ernest P. Worrell in the list of Christmas savers. He saved Christmas but good in 1988. Sure, Santa fell out of a moving taxi and punched someone in the face, but all in all, this is the template, people. 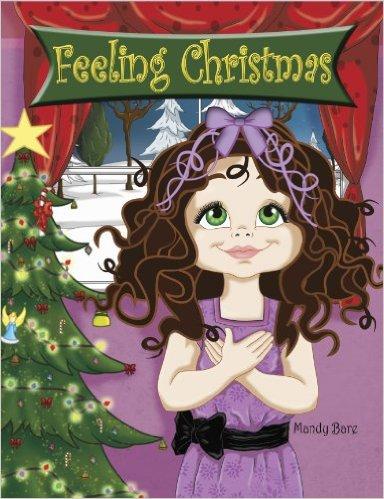 Here we have Feeling Christmas, which is ostensibly a children's story. But let's look a little deeper.

Author: Mandy Bare. Hmm. Sounds porn-y, but let's hold off until we read the description:

Isabella can feel Christmas in the air. She is determined to find the source of this feeling! She travels to the North Pole, helps the elves, meets Santa, and even takes a ride on Rudolph's back! She has an amazing time, but comes home to find the true meaning of Christmas underneath the stars lying in a manger.

Take a ride on Rudolph. Find the true meaning of Christmas while you're on your back in a manger. Sounds fine. 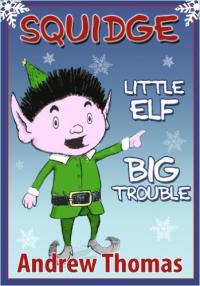 Squidge is a little elf who seems to get in big trouble quite often.

Squidge seems alright. I just...that name. I feel like squidge is what happens on a hot summer day when you don't wipe all the way, and your butt itches, and then you go in the bathroom and wipe and it's like you never wiped in the first place. All that debris, I'm pretty sure that's what "squidge" is.

But I went to Urban Dictionary. Because I was probably just being hard on the little dude.

squidge
noun; a wet fart
verb; the act of ripping a wet fart

I swear to you, I didn't look it up before making my assumption, and now I have to believe there is something inherent in the name Squidge that equals fecal matter. 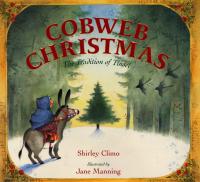 Aw, even a whole horde of spiders wants to get in on Christmas. 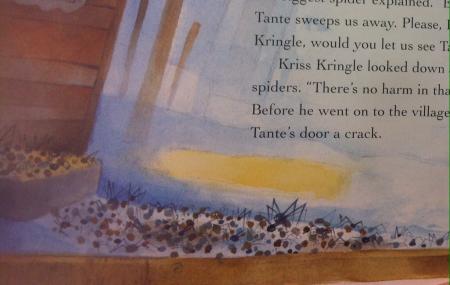 Yeah, the spiders are pissed off because the woman who lives in this hut always cleans up and gives them the boot before Christmas. So Santa lets this MASS OF SPIDERS into the house where they scuttle over the Christmas tree, uncontrollably ejaculating web all over the tree in excitement, and then, tree completely covered in web, the spiders all run away.

Luckily, Santa turns the webs into tinsel, and everything is cool. I mean, except for the part where we find out that enormous piles of spiders can communicate with Santa, and he will TOTALLY let them into your house if they ask. 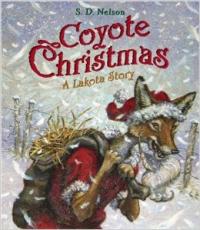 Sure. A Lakota Christmas story. That...okay.

I'm going to skip a lot here and just tell you that Coyote disguises himself as Santa, heads inside, a kid in a wheelchair opens an empty box and is pretty sad until he realizes he gets the gift of working legs, the kid dances on his new legs, and then Coyote runs off, dances on a fence, falls and smashes his balls on a fence post on the way down. All in the rich Lakota tradition. 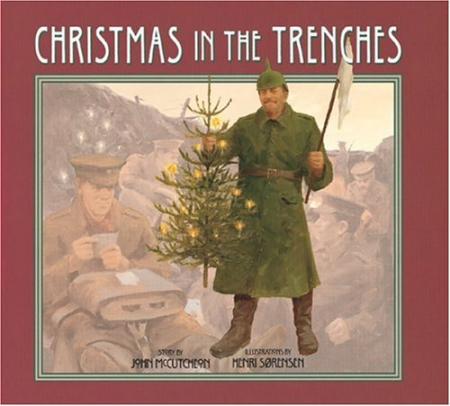 In this wonderful book, we have a war vet grandfather telling his grandkids about the famous Christmas during World War I where both sides emerged from the trenches and celebrated Christmas together. What a nice memory. How, for just one night, we all got along as brothers. Then the dawn came and we went back to our sides, and...well, that's the end of the Christmas part. Let's not discuss the day after Christmas. Mustard Gas Monday.

Just in case you wanted an ending that was more gritty and realistic, here's what I would predict if the book went on another two pages: 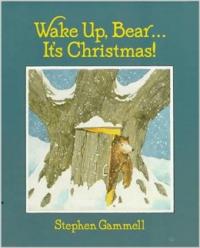 Aw, what a nice story. A bear.  Christmas. 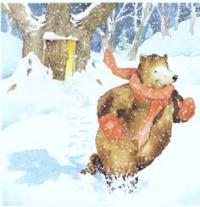 And...wait. Does something about these illustrations look familiar? 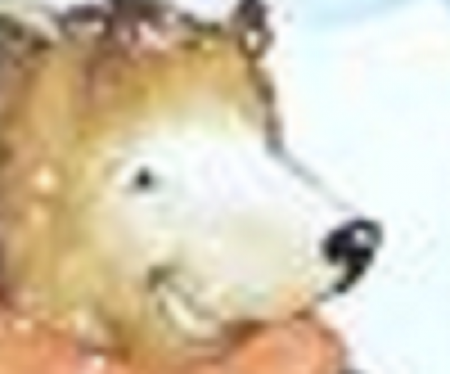 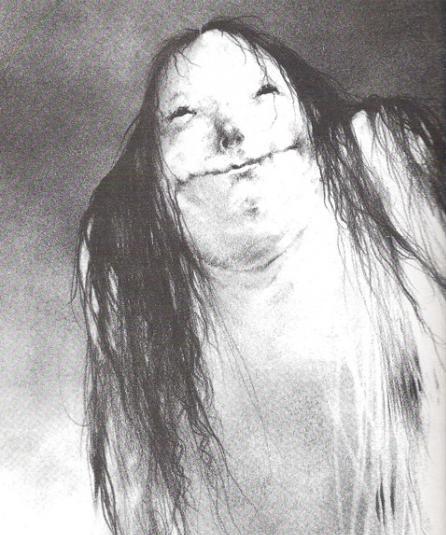 Oh, hell no! I see what you're doing here, Stephen Gammell. Trying to get on my good side with this bear story. You're the King of Terror! Accept it! It's who you are!

No way, I'm not reading this thing. I know this game. Five pages from now, the bear finishes romping in the snow and then a boil on his chest bursts open and spiders come out and I never stop peeing myself until I die from dehydration. No thanks, nice try.

And Finally, The Coal-Black Stare of Santa 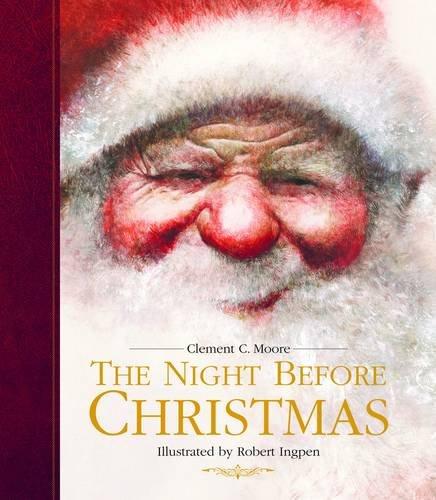 We have Robert Ingpen to thank for this terrifying Santa. Thank Robert. Thank him NOW. 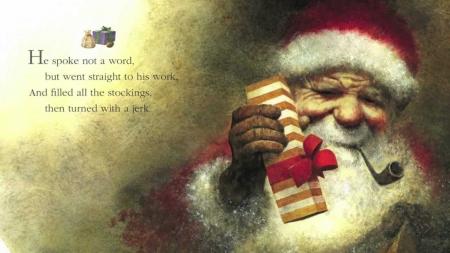 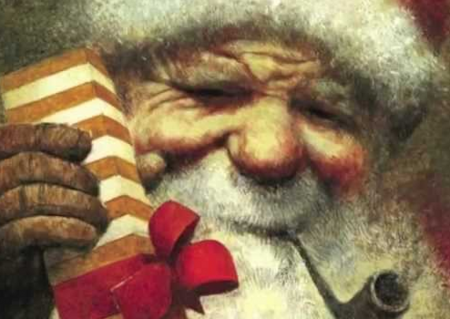 Voyeur does not rhyme with foyer

Community Manager
helpfulsnowman from Colorado is reading But What If We're Wrong? by Chuck Klosterman December 17, 2015 - 5:45pm

I'm just a simple hyperchicken from a backwoods asteroid (aka a jerk from America) who made a rhyme about a misbehaving fictional elf. But I do believe my friends Merriam, Webster, and Cambridge would agree with my bastardization of foreign terms.

Joshua Chaplinsky from New York is reading a lot more during the quarantine December 20, 2015 - 11:22am

There are many different books out there about easy math riddles for kids. You might want to get something a little more challenging, but if you're a parent looking to supplement your child's education, there are many fun options available for you. "Funexpected Math" is a great example of a program that will engage children early on in their learning of math. It combines math games with weekly missions that develop number fluency and strengthen logical reasoning skills. The app also provides a digital tutor that your child can follow along with and ask questions to.