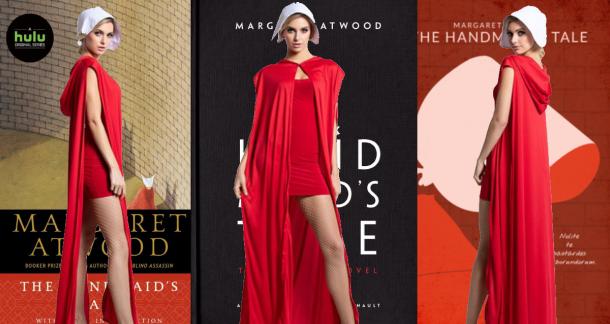 In the last little bit I’ve seen some weird Handmaid’s Tale stories. They got me thinking about fandom, fiction, and...damn, I can’t think of another F-word. We’ll come back to that.

Let’s look at these stories one at a time. 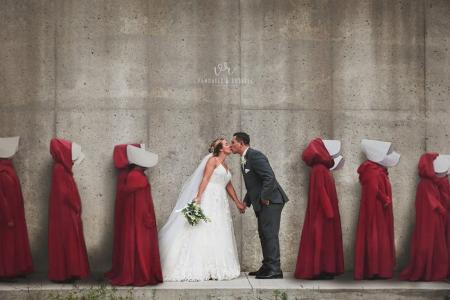 Here’s what happened: A couple got married. They hired a photographer, as one does. They took one picture in front of a wall, which was at the wedding venue and also was used as a setpiece in the Handmaid’s Tale TV series. The photographer then photoshopped in the ladies in red. So, this wasn’t a Handmaid’s Tale themed wedding, as some probably heard, and the photoshoot wasn’t themed that way either. It was one photo of many.

Before we get too deep, let’s tackle the other story.

The second story I came across was about anger over a sexy Handmaid’s Tale costume put out by Yandy. It's a couple years old, but I suppose Halloween reignited interest. 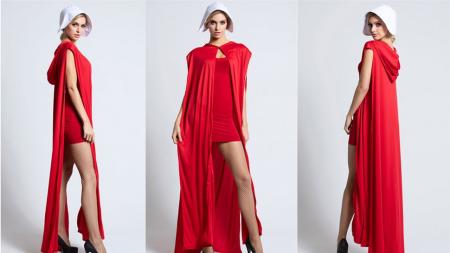 Yandy, it should be noted, is currently the company that is mostly responsible for the “Sexy [blank]” costumes. A lot of other companies have jumped ship on sexifying Halloween, but Yandy’s holding the line. Sexy Mr. Rogers, Sexy Tin Man. If there's a costume that doesn't lend itself to sexy, and if someone is making a sexy version, it's Yandy.

The sexy Handmaid's Tale costume is, well, par for the course. If you don’t like sexy Halloween costumes, that’s your thing, and I see where you’re coming from. But to single out a Handmaid’s Tale costume as being super offensive, as opposed to any other costume, is odd to me.

We’ll come back to it.

Now that we’ve got the two stories outlined, let’s get to the big question: What is and is not acceptable when it comes to fictional stories? What can we do in terms of engaging with fiction? What’s over the line? What are the rights of authors and what are the rights of fans?

I don’t think much of anything is over the line. Just so you know where I’m coming from, I don’t think anything that constitutes reinterpretation or an individual angle on a piece of fiction is “unacceptable.”

Fiction opens up the rules, especially in terms of taste.

Even if that wedding had been a balls-out Handmaid’s Tale wedding...so what? Is that disrespectful to...the novel? The TV show? The fictional women who fictionally “died” during fictional executions? Margaret Atwood?

And the costume. Let’s look at the classic Sexy Nurse costume. A nurse is a real person. With a real job. A Handmaid from The Handmaid’s Tale isn’t a real person. I know, I know, there are real-life parallels, but by that logic, it would also be intensely disrespectful to dress as, say, Sexy Freddy Krueger.

I would have to say something different about an Anne-Frank-themed wedding, or an Anne Frank costume (which totally exists!), but that’s non-fiction.

Fiction opens up the rules, especially in terms of taste.

I recognize that people get upset about Handmaid’s Tale stuff because they perceive Margaret Atwood having a certain intent, and that intent is being ignored or attacked when it’s interpreted in certain ways or parodied. Also, they see the novel as having a certain importance in our current political climate.

But if you’re pissed off about the interpretation of The Handmaid’s Tale that produces a sexy costume because it’s against Atwood’s wishes, if you’re coming to the defense of your literary hero's purpose, you’re guilty of not taking a moment to listen to what Margaret Atwood has to say about it. Because Atwood is not mad. As evidenced by her appearance on Seth Meyers:

Seth Meyers: As a writer, that must be frustrating when someone does so badly on the book report that they think that that is an okay costume.

Atwood: I have a sense of humor.

Her choice of words is key. “I have a sense of humor.” She gets it. It’s funny. Regardless of whether or not the costume was intended as a big joke, Margaret Atwood can look at it as comical, the fact that this book she wrote birthed a sexy costume.

I agree with her. It’s funny. It’s not, as Seth Meyers speculated, frustrating. It’s funny.

If anyone is going to come down on sexy costume makers, shouldn’t it be Atwood? And if she’s fairly indifferent to the whole thing, if she can shrug it off, shouldn’t the rest of us follow her example?

If Atwood gives it a pass, who among us is suited to revoke that?

If you can make a sexy Handmaid’s Tale costume, and if that concept is something Margaret Atwood doesn’t get uptight about, then I have to say, seems like this is an acceptable interpretation of a fictional tale.

[say it in your best Mel Brooks voice]

If you love something, then there’s some fucker out there willing to sell it to you for a little profit.

On the official MGM store you can buy LOTS of great Handmaid’s Tale merch. Get a hoodie that says “Don’t let the bastards grind you down!” Get a phone case that says, “Blessed be the fruit.” How about an “I intend to survive” tank top?

I think we’re so used to this stuff that we don’t even think about it, but slow down and look at it from another angle. We’re cool with a huge corporation commodotizing The Handmaid’s Tale and selling it back to us, that’s tasteful and within the boundaries of what we think it is right, but we’re NOT cool with someone who is NOT a giant corporation taking a wedding photo for their own enjoyment? That’s poor taste, against the cause, but a $35 dollar phone case is somehow in the spirit of fighting the patriarchy? Wha?

It's not just MGM either. Lots of folks on sites like etsy are expressing their fandom for profit.

I would strongly suggest we rethink the boundaries of "good taste" here. Because I can’t draw them in my mind such that profiting from a cheap plastic phone case is classy and a wedding photo is an abomination.

Here’s a picture of women wearing costumes at a protest: 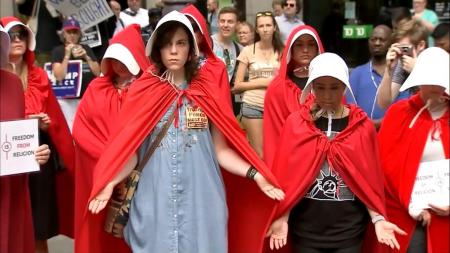 Here’s some women wearing them at San Diego Comic Con: 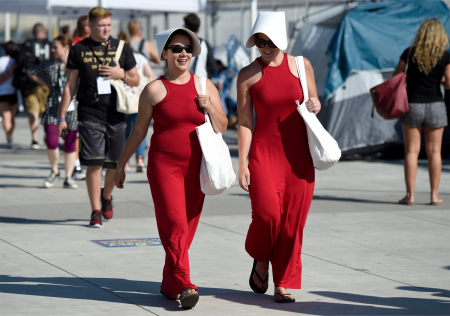 Here’s another protestor pair, these two who are anti-abortion: 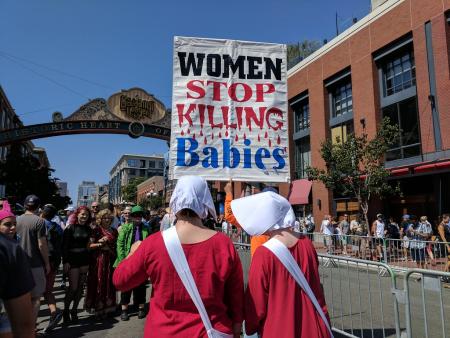 The second would be...not incorrect, but not AS correct. What’s the obligation of someone dressed this way? Should they behave as though there’s a seriousness to their costuming? Is the costume fun? Is love of a TV show, even a serious one, fun?

The third would probably be seen as the least “correct,” of the three, although it’s a strange case because the wearers are clearly taking what they're doing seriously. They aren’t mocking, from what I can tell. To be honest, I find it confusing, and I'm not 100% sure what it means to the wearers.

What we all need to understand about fandom is that fandoms, and the fans that comprise them, are not one thing. Although these folks all enjoy or identify with The Handmaid’s Tale in some way, they clearly are not engaged with the material in the same way.

Things get messy when you put them in the hands of people.

Star Wars fandom is made up of several different camps. Fans of comics have different eras they love, different things about comics they enjoy. Fans enjoy things differently in private, and when that enjoyment spills into the public sphere through conventions, pieces of art, and so on, we get a quick look into the different ways people love the things they love.

These differences prove the power of fiction. How personal some huge piece of fiction can feel.

In some ways, all of this, the sexy costumes, the protests, the wedding photo, all of it is great for The Handmaid’s Tale.

The Handmaid's Tale was the most-read book on Amazon in 2017, almost 35 years after its publication. In 1985, do you know what the Pulitzer for Fiction went to? Foreign Affairs by Alison Lurie. Who’s dressing up as characters from that? Would you even know if they were? Does anyone give a shit about Texas by James Michener today? Because A LOT of people did in 1985.

Curiously enough, The Handmaid’s Tale wasn’t even the best-selling book at any point during the year it came out. It's survived the test of time, and it's ascending to the next level, exceeding the reach of most fiction. It’s becoming ingrained in the culture.

Being ingrained in the culture comes with some rough spots for any book. People will be downright disrespectful. It’ll be mocked on SNL. But the way a novel continues to be alive and vibrant is by being part of the larger cultural discussion, and in order to do that, someone’s going to have to get pissed off. If there’s nothing unresolved, nothing complex and bothersome about The Handmaid’s Tale, then it won’t be long before everyone loses interest.

If people couldn’t be offended by the things surrounding the book, it would've died in 1985. If there were no questions about the inerpretation of the book, if it was cut and dry, it would have been lost to the last 35 years, to something more modern.

We should all hope the things we love spawn ill-conceived costumes, tasteless wedding photos, and sects of fandom that read it differently. It means they’ll be around for a long, long time.

Book vs. Film vs. Series: "The Handmaid's Tale"