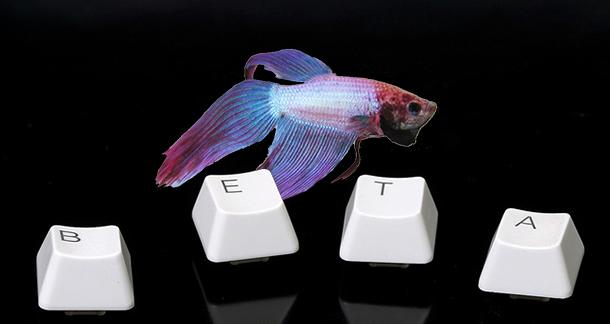 Beta Readers. Beta Buddies. The words can strike fear into a writer's heart. They've written a novel, yes. Poured their heart and soul into it, yes. But now it's time to put their words out into the world, out into a small, controlled environment, populated by friends. Colleagues. And yes, occasionally, their mom.

It's a nerve-racking time. We writers? We're tender-hearted (well, some of us, anyway). Every time we send you a piece of our work, we hope this is the time you come back and tell us: this is a work of pure genius. It's perfect. It's the one. Don't change a single sentence.

That's what we hope, at least in the deepest and most secretive bits of our tender-writer-hearts. And although most of us have reasonably thick skins, honed from years of sharp-tongued reviews and acerbic rejections, really, secretly, we all want our words to be loved.

Take me, right now. I'm about ready to send a brand new project out to Beta Readers (if by "about ready" you mean "in a couple-to-few months"). This project? It's been rough. It's a southern gothic-y young adult horror story, and I feel like it's been all over the place. I started it with one vision, a vision that wasn't at all supernatural, but as time went on and the story progressed, a demonic-ish creature in the swamp appeared and altered the story drastically. The characters I wrote in the beginning were not the ones I wrote by the end. Then two weeks ago I decided to re-write 40-ish pages of the ending. Since then I've written almost a hundred new pages, with new sub-plots and God knows what else.

I don't know if this is the best thing I've written, or the worst. I'll do one final, lighter edit prior to sending it to my Betas, and I've got to be honest: I'm terrified. Will they love it? Hate it? Laugh at it?

I want them to love it, so much, but I'm terrified they'll hate it. The rational side of my brain knows they'll likely clock in somewhere in the middle, and hopefully they'll give me what I need to move the project forward.

So. What, exactly, do I hope to get from my Betas? And, when I sit down to do a beta read of someone else's project, what do I want to do for them? This is advice honed from years of reading and writing, and will hopefully be useful to you, the next time you sit down to be a Beta Buddy.

Honesty is the best policy, lies will get you nowhere, blah blah blah blah blah. It's all cliche, I know, but it's also completely legit. If someone asked you to do a beta read, it's an honor in many ways. The writer trusts you with their words, which are, in many cases, jagged pieces of their heart. They are trusting you. That's...huge!

So reward them, please, by being honest. They need your help, and your abject honesty. If you love a book, tell them...but also tell them if you don't. Every insight you offer should be pounced upon by the writer. After all, you're a reader first, right? And writers need to know what our readers think! No matter what. A writer will not improve by receiving dishonest positivity, and if a writer is taking the step of reaching out to Betas, trust me: that writer wants to improve. So please, help them.

In that spirit, don't be afraid to tell your writer if something doesn't work for you. Especially if it really doesn't work. I once had a Beta tell me pretty much nothing in my story worked for her, and while that was painful, it wound up being super-helpful feedback. Basically, a writer can't fix what's broken if she doesn't know it's broken, and sometimes tough love is the way to go. If a story sucks, she's not going to sell it anyway, so she might as well get to work on rewrites, eh?

It's time to put your words out into the world, out into a small, controlled environment, populated by friends. Colleagues. And yes, occasionally, your mom.

That said, no one ever learned anything from brutal feedback offered in a brutal manner. Sometimes the tough love has to happen, but a spoonful of sugar also helps the medicine go down. There are many ways to offer feedback that is constructive, that points out flaws, but is also rationally written and devoid of hyperbole. Telling your writer friend "this is the worst piece of shit I've ever read" won't help the writer, and it also won't help your friendship.

Remember that a little kindness can go a long way toward helping a tender-hearted writer stomach your feedback, helping them (and your friendship) succeed.

In offering beta feedback, a little does not, in fact, go a long way. In fact, a few lines saying, "Oh hai friend, I read it, I love it, it has a nice beat, and you can dance to it," does absolutely nothing for your writer. Beta feedback is truly a place where the more, the merrier is far more apropos.

Helpful feedback includes statements such as, "Oh, hai friend! Overall, I think your themes of  religious persecution versus extremist behavior work well, but perhaps you could be a bit more subtle toward the end..."

Or, "Oh, hai friend! In Chapter 6, you say your main character has blue eyes, but everywhere else she has brown. Which is it? Also, maybe we don't need to care about her eye color at all? Think Hemingway in your descriptions. Omit unnecessary words."

Or, "You had me up until the end, but that final battle scene, with the demagorgon and the snickerdoodle didn't quite work. The dialog felt forced, and also, on page 673, you completely killed a character who then appeared on page 674 alive and well. What gives?"

Precise, prolific feedback will help the writer know exactly what to look at, and will also likely ensure a quid pro quo exchange of stellar feedback for you on your next project.

A Beta Reader is an early reader. As such, while you don't need to drop everything and read the story your friend sent you right now, right away, oh my God, get out of the way...it's still good to look at the piece sooner instead of later. Beta feedback won't be helpful at all if it arrives after the book is published...or worse, deleted from the writer's hard drive because (since you never sent feedback) clearly it was the worst thing ever written!

Don't Be an Asshole

Look. It should be obvious, but I'll say it again: when a writer asks you for beta feedback, they are showing you a ton of trust and respect. Do yourself a favor and don't be a dick. Don't ghost them. Don't tease them. Don't go on twitter and have an epic rant of subtweets talking trash about their work. Be nice. Be professional. Because trust me! It's worth it!

Beta Readers are so vastly important to writers. They are cherished and appreciated, and often wind up in the Acknowledgement pages of novels. That's how important they are. So if you're going to do a beta read, take it seriously, and all will, hopefully, work out in the end!