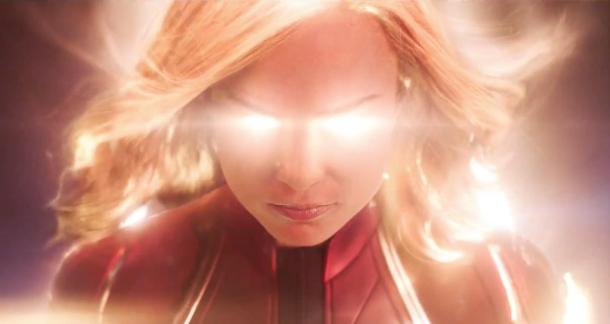 Before it was released, before it had even begun filming, Captain Marvel was beset by naysayers and discouragement. Comment sections, message boards and Twitter were filled with angry men spewing hatred at it simply for existing. And there were plenty of opinion pieces and critical analyses explaining with a veneer of condescension why a female-led superhero movie was a bad idea doomed to fail. It was review-bombed before it was ever seen. However, all that opposition only made Captain Marvel stronger, as it went on to become one of the most successful superhero movies of all time. In a way, the movie is a metaphor for its own contentious existence. Captain Marvel is not just a woman-led superhero movie, but a superhero movie that is about being a woman.

Be warned, the spoilers will fly.

In a series of flashbacks, we learn that Carol Danvers has a history of being told what she can’t do by men, and then doing it anyway. Every time she falls, there is a man there to tell her why she shouldn’t get back up, but she always does. Despite the relentless discouragement, she becomes an Air Force pilot. Though she is talented and skilled enough to fly experimental aircraft, she is barred from combat duty. She is willing to fly, fight and die for her country, but she is not allowed to because she is a woman. On top of that, she has to endure the smug derision of male pilots for even daring to think they are equals. But Carol and her friend Maria Rambeau prove themselves more than competent in a dogfight before the end credits roll.

Carol coaxing the toast confession out of Nick Fury is one of the most hilarious moments in the entire MCU.

One of the first recurring beats of the story is that almost every man Carol Danvers encounters tells her she’s not funny, echoing the assertion of misogynists throughout the ages that women are incapable of comedy, despite this being demonstrably false. Carol coaxing the toast confession out of Nick Fury is one of the most hilarious moments in the entire MCU. Coincidentally, Fury is the only man that laughs at her jokes. He is also more than willing to let Carol take the lead once he realizes he’s in over his head, assisting her instead of stubbornly trying to assert control over a situation in which he was both literally and metaphorically powerless.

The villain, Yon-Rogg, is the exact opposite. A personification of condescending paternalism, the patriarchy packaged in a nice punchable face. At the beginning of the movie, he has led an amnesiac Carol Danvers to believe she is a member of the Kree Star Force. As her superior officer, Yon-Rogg is a classic faux feminist. He has no problem working alongside strong women, as long as they stay in line. The kind of man who helps out a female coworker, then feels entitled to ownership of her success or some other quid pro quo. She is “allowed” to use her incredible power as long as she keeps it under (his) control, and he constantly reminds her that what he has given her can be taken away. Of course, he insists that he’s doing all of this for her own good, so she can be “the best version of herself,” meaning a version that serves his ends. Yon-Rogg isn't really helping her, but co-opting her power for himself. He's a textbook gatekeeper, imposing rules and restrictions to keep a formidable woman from threatening his supremacy. Sadly, every woman I have ever known has had at least one Yon-Rogg in their life. When Danvers finally breaks all of his rules and shows her true power, he claims to be proud of her. Even when he stands alone and clearly defeated in the end, he tries to bait Carol into a no-powers fistfight, demanding she beat him on his own terms. In any other movie, she would have done that. But Captain Marvel just casually knocks him on his ass with a bolt of light, because she doesn’t have to prove anything to him.

Even the interstellar conflict that forms the backdrop for Captain Marvel’s story is an allegory for gender politics. The Kree Empire is essentially a warrior brotherhood built on the principles of toxic masculinity: finding strength in the purging of emotion, preaching power by right of might, and forcing stability through dominance. Security is achieved by asserting control; anything that rejects control is a threat to the whole order and must be crushed. By contrast, their enemy, the Skrulls, have characteristics typically classified as feminine. Their culture is oriented around family and children rather than brotherhood and duty. Since they are not as strong as the Kree, they must rely on their shapeshifting abilities to hide or appear nonthreatening in order to survive. Ask any woman if she’s ever been afraid to be honest with a man, and I guarantee you’ll hear the same answer every time. Ironically, they wouldn’t need to hide and obfuscate if they weren’t being targeted. The Skrulls are painted as deceitful infiltrators and an existential threat, but we later learn that the Kree already destroyed the Skrull homeworld and continue to hunt its survivors for the unforgivable crime of refusing to submit to their control. Talos, the Skrull commander, is not leading a strike team to destroy his enemy, only a group of refugees in search of a sanctuary. He doesn’t want to infiltrate the Kree Empire—he wants to make a safe home for his family. Once Carol learns the truth, she commits to helping them with everything she has. She doesn't just call it a day after vanquishing the villain, but flies off into space to help them find a new home. 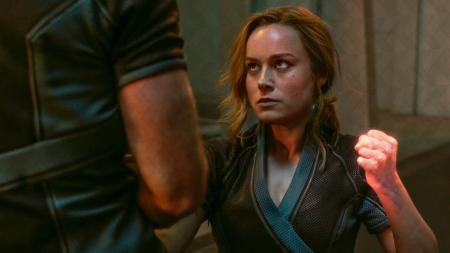 So how does Captain Marvel finally save the day? She realizes that her power is her own, and that no one—not Yon-Rogg or the Supreme Intelligence or even SHIELD-—can tell her how to use it. Once Carol knows her own strength, none of them can control her anymore. Then she single-handedly repels an alien invasion force and sends the Kree a stern warning. Captain Marvel’s message is clear: women are not to be trifled with, and men forget that at their peril. Personally, I cannot wait to see Thanos learn the hard way.