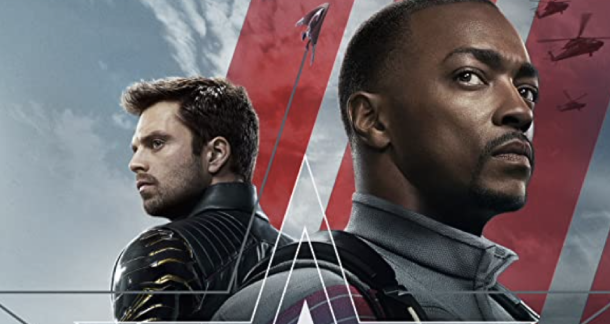 Let me make this clear from the top: The Falcon and The Winter Soldier is not a bad show. That’s not what I’m saying. It is five and a half really great episodes of polished MCU action with an underwhelming finale. While that isn’t enough to sour the whole experience, it is a curiously middling end to an otherwise well-crafted adventure.

The only reason the last episode stands out so much is because what preceded it was exactly what we had been hoping for: a fun, buddy cop action comedy starring beloved superhero odd couple, the Falcon and the Winter Soldier. We get to see them go to couples’ therapy and fix a boat together in between trying to save the world and protect the legacy of Steve Rogers. There’s all the witty banter, stunning action set pieces, and fascinating character work we expect from a Marvel movie. F&WS even fills in some of the narrative blank spaces left by the films. This show acts like one of the countless miniseries that would often tie in with the big event crossover comics, giving us a glimpse of how these Earth-shattering events affect all the normal people caught in their wake. It also gives our protagonists a chance to complete their own character arcs instead of just following Captain America around. In the absence of their mentor and role model, these two are forced to find their own way as heroes. It’s not quite as easy to always do the right thing when you don’t have the paragon of noble selflessness giving you instructions, but they eventually figure it out and it is a genuine blast to watch them do it.

Unless you’re a fan already committed to watching everything Marvel puts out in the future, this show lacks the narrative heft to feel like a satisfying and complete story on its own.

One of the show’s flaws, which ultimately contributes to the final episode fumble, is that it introduces too many interesting villains to do them all justice. We barely get to know John Walker before he is reduced to a raving lunatic. Sharon Carter’s heel turn takes place offscreen and receives a line or two of explanation that are most likely half-truths, if not outright lies. Zemo steals the show as the most delightful antagonist, but we learn little more than we already know about him from his previous appearance in Captain America: Civil War. The Flag Smashers’ cause is so justified and sympathetic that the narrative forces them to become uncharacteristically bloodthirsty in the final act so our heroes have no choice but to fight them. And finally, the Global Repatriation Council, the real villains of the story, are barely examined at all, and get off the hook with a stern but friendly talking-to from Captain America.

The GRC’s decisions create the show’s main conflict. While we hear about some of the good things the GRC supposedly does (mostly from their own PR materials), all we see of their handiwork onscreen is the human misery inflicted by their cruel policies. The Flag Smashers and their allies are all poor and live in a Hollywood vision of squalor. They don’t rob banks or traffic weapons—they steal food and medicine to give to the helpless and are labeled as terrorists. We never meet anyone who has been helped by the GRC. If this organization has actually done any good for anybody, we see no evidence of it onscreen. You’re kind of rooting for Karli Morgenthau’s ragtag band of rebels until they decide to execute hostages in the final act, which is becoming Marvel’s go-to villain arc.

But the GRC and its members have no arc. Since they are not a government or agency we have any familiarity with, and don't have a single named character among their ranks, there is no reason for the audience to respect their authority, or care if it is challenged. In the scant few minutes we see of their deliberations, they are not debating whether or not they should should forcefully relocate people, but if they should carry it out politely or maliciously. After their rescue by the new Captain America, a senator on the GRC reaffirms their commitment to carrying out the very policies that set all of this violence in motion. While the civilian leaders of the GRC didn’t deserve to die, Sam’s brief lecture hardly seems sufficient to address their wrongs, let alone right them. Sam Wilson’s first big inspirational speech as Captain America is actually a pretty good one, revealing why he finally took up the shield with an answer that is both heartfelt and believable. But his exhortation to “do better” sounds especially hollow now that we know just how likely it is that a senator’s actions would be swayed by surviving an attack from an angry mob of their own making.

As the end credits roll, I’m left wondering if our titular heroes actually had any affect on the world at all. That’s fine for a tie-in comic that’s just supposed to be a supplement to the real adventure going on in the main books, but this approach is less effective for an independent television series. You definitely won’t understand or enjoy it as much if you have no previous experience with these characters or this world. Unless you’re a fan already committed to watching everything Marvel puts out in the future, this show lacks the narrative heft to feel like a satisfying and complete story on its own. But if you are that dedicated fan, The Falcon and The Winter Soldier is not a bad way to burn six hours.

Get Falcon and Winter Soldier Vol. 1 at Amazon

I’m left wondering if our titular heroes actually had any affect on the world at all. That’s fine for a tie-in comic that’s just supposed to be a supplement to the real adventure going on in the main books nox player for pc jiofi.local.html

Before the Dlink setup process, a user has to make sure to position his router in an optimal location from where it can fetch a maximum number of Wi-fi signals. Users are recommended to place their router in a properly ventilated area so that no other signals can interrupt the Wi-fi connection between your router and the computer. Experts advise users to perform the dlinkrouter.local setup process through the wired connection using the Ethernet cable connecting your router to the computer.

Thanks for the post. This was watched by me in the home theater system on my smart home. Wonderful experience on enjoying the movie.

Thanks for sharing this information.

Xender for PC, Picsart for PC